“This is no ordinary stroll around some shrubs. These aren’t your bog-standard gardens“

Kew Gardens are also known as the Royal Botanic Gardens. Just 30 minutes from Central London, Kew Gardens boasts landscapes, glasshouses, historic buildings and a vast range of rare and beautiful plants. Its scientific and botanical centre has been and still is of huge importance worldwide. In 2003, Kew Gardens became a United Nations World Heritage Site.

Open all year round, the Gardens cover over 300 acres, on the south bank of the River Thames, between Richmond and Kew . They were originally home to two estates – Kew Estate and Richmond Estate – which were combined to form the Royal Botanic Gardens. 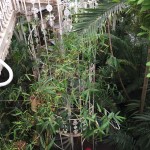 The formal gardens are, of course, a major attraction, each specially planted and themed. They include the Azalea Garden, the walled Duke’s Garden, the grandly-named Palm House Partierre, the Queen’s Garden, the Rock Garden, plus the Plant Family Beds and Rose Pergola.

Aside from the gardens, there are many other attractions to enjoy. In particular, make sure to look out for the Henry Moore Sculpture, the Japanese Gateway, the Pagoda (this 50 metre high octagonal structure dates back to 1762), of course Kew Palace and the Royal Kitchens.

And if you’re after more than a jaunt around the gardens, Kew also hosts a number of special events, throughout the year. Naturally, there are events focusing on plants and flowers, but if an open-air concert and picnic is more your scene, it’s worth checking out Kew The Music. And if you prefer movies to music, keep an eye out for Kew The Movies, which sees Kew Gardens turn into an outdoor cinema for one weekend.