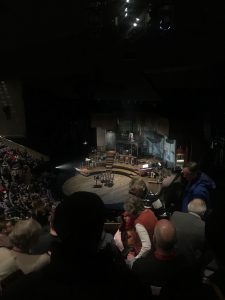 One of the most integral parts of my experience in London has been the access to theatre. As a playwright, I chose to study abroad in London in order to have this proximity to a vibrant community of theatre makers. Little did I know that this community would be less than a five-minute walk from my dorm room.

London’s institutions from museums to theaters boast student memberships that allow you to access history and the arts for affordable prices. Becoming a student and 25 and under member of places like the National Theatre and the British Film Institute (BFI) allowed me to see theatre and films for a fraction of the prices I have paid in the states. Through my membership at the National Theatre, I was able to see I’m Not Running by David Hare, Stories by Nina Raine, and most notably, Hadestown by Anaïs Mitchell, which is now a Tony nominated musical now on Broadway. All of these tickets were £18 or less, and some of these seats were just a few feet from the stage. The National Theatre’s sleek, comfortable environment an it’s commitment to providing students with reliable accessibility to the arts made it an accessible theatre viewing space and even a study space on the weekdays. Not only were these shows accessible monetarily, but they were also walking distance from my dorm, which made it far too easy to see some shows (like Hadestown) twice.

I was able to see more than twenty shows over the course of my semester in London. Although seeing theatre is transformative and breathtaking in its own right, I have to mention the ways in which London’s theatre scene has influenced me as an artist now that I am back in the states. After seeing Hadestown, I was inspired to try risky choreography and daring moments while assistant directing Wesleyan’s production of Next to Normal, and I can’t wait to see Hadestown’s journey fully realized at the Tony’s this season. Outside of the National Theatre, I was able to see Matthew Lopez’s brilliant play The Inheritance. Lopez’s play is a two-night, seven-hour saga that mirrors Tony Kushner’s Angels in America and has also become the basis of my upcoming senior thesis at Wesleyan. The theatre I saw in London has shaped the stories I believe are able to be told through this medium and strengthened my conviction that accessibility to the arts is life changing.

The best part of seeing theatre abroad was bonding with my friends through discussing the plays and musicals we watched along with our pre-show rituals. Running to the market for dinner (or, let’s face it, Nando’s because it’s so good), grabbing a drink before the show and walking across the Thames to get back to our dorm will always be some of my the most memorable times of my study abroad experience and my college career.