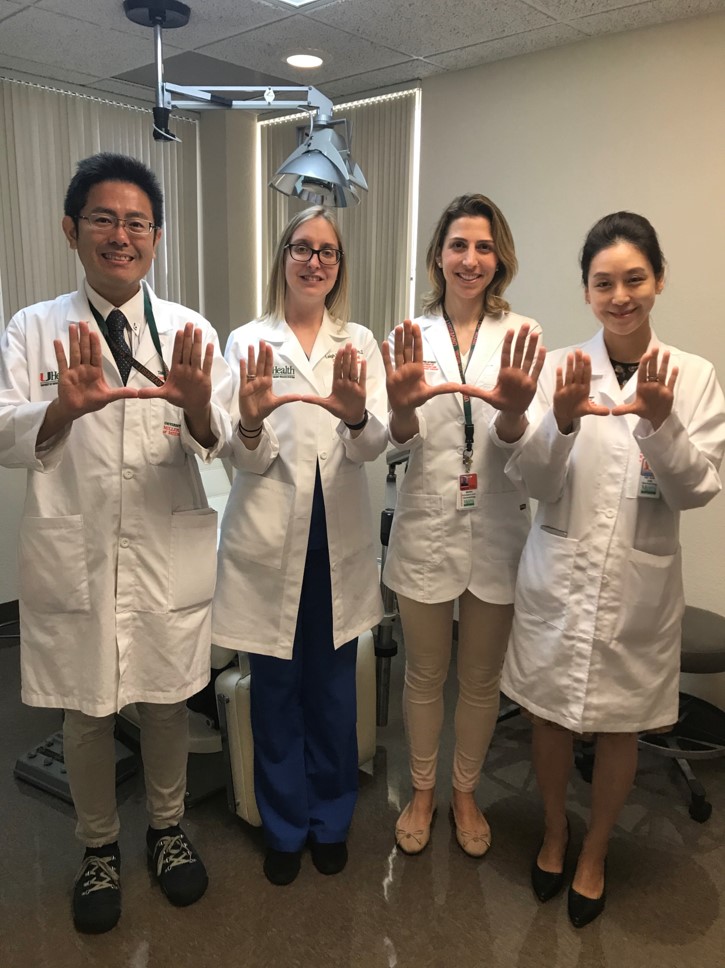 I would like to thank King’s College London warmly for supporting me towards my visit to the Miami Itch Centre. This took place in October 2019, over a period of two weeks. This destination was chosen in the context of my current research project, the PRUMEC trial, which focuses on elucidating the cause of itch in an inherited skin condition known as Dystrophic Epidermolysis Bullosa (DEB). I am conducting this under the supervision of Professor John McGrath in the Genetic Skin Disease Group of St John’s Institute of Dermatology. Dr Gil Yosipovitch, one of our main collaborators for this study, is the Head of the Miami Itch Centre and a worldrenowned itch expert. 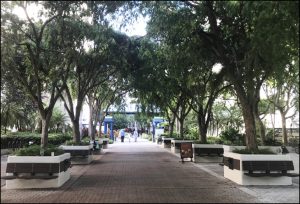 During my visit I was primarily based at the Gil Yosipovitch Laboratory, located within the Rosenstiel Medical Science Building – University of Miami, where I was hosted by Dr Yosipovitch’s dynamic laboratory group. The primary purpose of my visit was to assist with immunohistochemistry staining of 45 skin samples which I had personally collected as part of my study. Each stain set (five in total) was completed through a three-day protocol; the aim was to use fluorescence-labelled antibodies to quantify and compare the expression of major itch mediators and receptors between patient and control skin. I also had the chance to examine our stained samples under a microscope, and review pictures produced by the relevant computer visualisation software.

During the course of my visit I was also fortunate to join Dr Leigh Nattkemper in several clinical trial visits, involving both topical and systemic anti-itch agents. The visits involved amongst other things, induction of itch with histamine or cowhage (a plant native to Africa and tropical Asia, whose seedpods induce itch when touched), sensory testing for itch and pain and the use of itch assessment questionnaires. These provided great insight into translational aspects as well as some sound clinical practices in itch-related research. 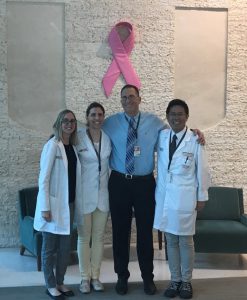 Finally, my visit to the Miami Itch Centre was complemented by a rich portfolio of clinical activities. This included attendance of the weekly Dermatology Departmental Meetings, where several interesting cases were discussed in depth, an exciting lecture on Chronic Itch by Dr Takashi Hashimoto and participation in an all-day itch clinic alongside Dr Gil Yosipovitch. In the latter, we reviewed several patients suffering from itch of different aetiologies. This not only helped sharpen my diagnostic skills, but also allowed me to familiarise with the therapeutic modalities available in clinic for the alleviation of severe generalised itch.

I am grateful to Dr Yosipovitch and his team for organising an exciting and productive couple of weeks for me, as well as to Professor McGrath for making this trip possible; my visit provided a great overview of the scientific and clinical armamentarium available for the investigation, assessment and eventually management of itch. I am confident this will be an excellent foundation to build on as I move on with my PhD project and beyond. I would like to finish by expressing my gratitude to King’s College London once more, for supporting me in organizing this fantastic trip. 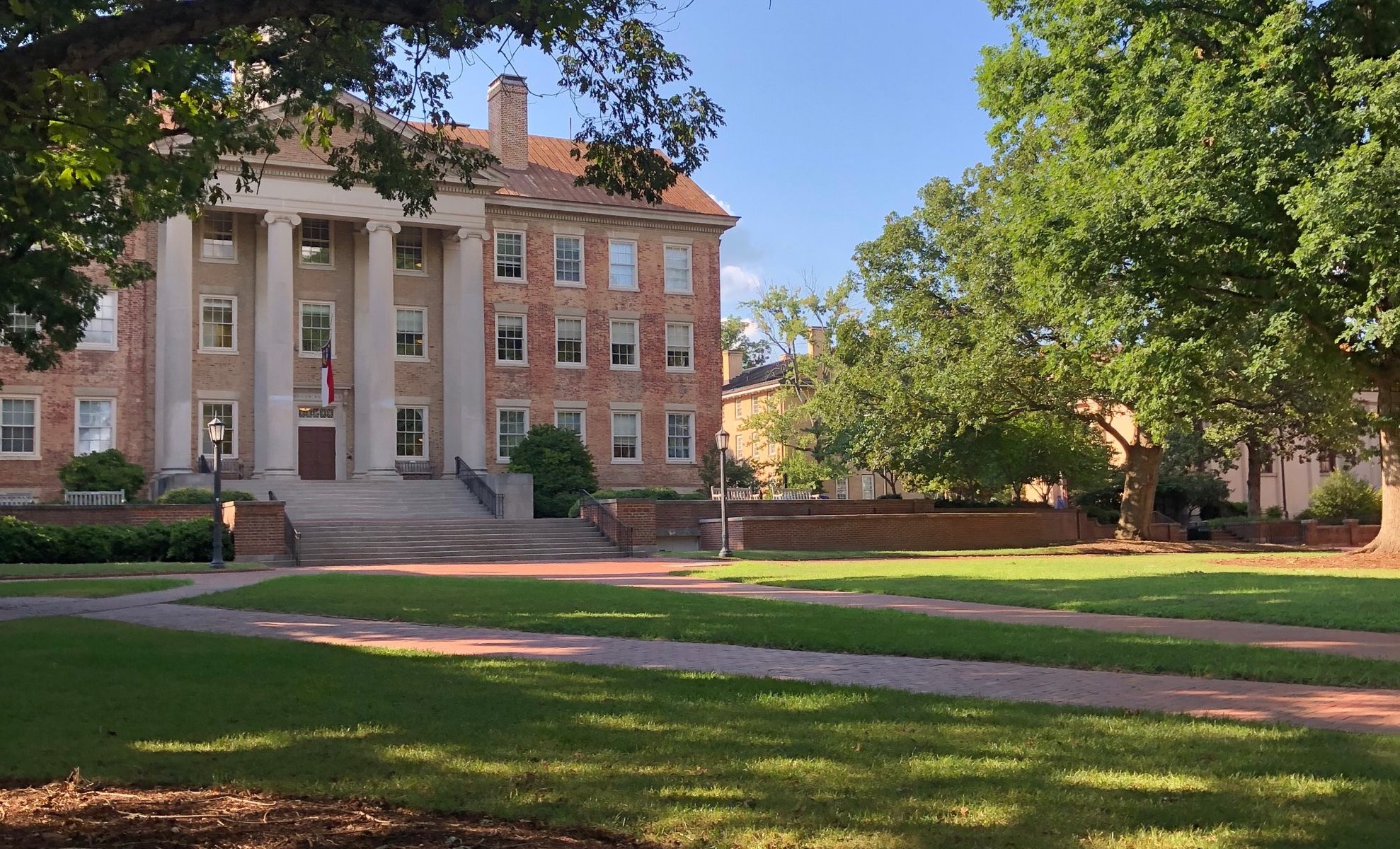 This blog is for those of you who want to do a study abroad in America. I’ll be going over some of the key aspects of the experience and what you can expect. I myself did my study abroad at UNC Chapel Hill so there’ll be some content specifically to do with that University but anyone who’s going to be studying abroad can learn from these experiences no matter what University they’ll be heading to. I’m going to cover some of the basics and then give my overall take on it.

The People and Culture

Put simply, it’s a whole another world out there. You’ll find yourself re-learning basic social behaviours and manners from scratch. People communicate differently, move differently and interact differently. Some things we would consider socially acceptable isn’t considered so over there and vice versa. You’ll find that the majority of people at your university will be from the state it’s located in. This is thanks to a law which makes it cheaper and easier for residents of a state to attend its universities than universities in other states. In a place like North Carolina, people have different attitudes and habits, about pretty much everything. Living in London for most my life I thought everyone is as sarcastic or sharing as a Londoner is. But you quickly realise that that is not the case. This is not to say people in North Carolina are not at all, just not to the extent of Londoners. And they will have personality traits that we won’t have as much of. This is one of the most eye-opening things you’ll learn on your study abroad experience. That people around the world are so different from each other. It lets you clearly see the habits and ideologies that you live by that were brought upon you due to the place that you grew up in. People dress differently, address one another differently and see each other differently. What you and your best friend are willing to do for each other won’t be the same as what 2 North Carolinian best friends would do for each other. And that’s where you learn what’s unique about the ideologies you live by. The personality of people will be different depending on where you attend. For instance, people in California will be different than those at Michigan. There’s no ‘better’ personality, it’s just that they’re different. But no matter what they’re like, you’ll learn that they are very different to you and you’ll ultimately learn about yourself. 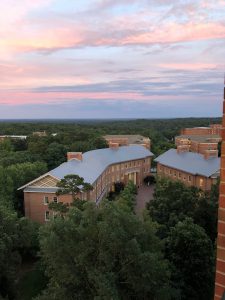 It’s impossible to write an article on American schools without mentioning sports. King’s is in London. London has multiple major football teams. But you’d never know if you were a tourist just looking around. America is the exact opposite. Sports is everywhere and is dearly loved by Americans. In order to play professional sports in America, an athlete has to go through the sports system at universities and schools. Professional sports and universities are very closely tied. This makes universities care greatly about their athletics department. I believe all the universities KCL has a partnership with are Division 1 schools. Meaning, they’re the best of the best in terms of their athletics. No matter what university you go to, the university will have immense sports facilities. I’m talking an American football stadium the size of Wembley, countless basketball courts, free gyms, swimming pools etc. You will run into athletes on campus who will become professionals in a few years and you even get to see them perform for free. UNC in particular is a huge basketball school. Michael Jordan played there, so you can imagine the basketball facilities they have. I was able to attend a few of their games and got to see some players who are currently in the NBA. The best part about this is that they are very inclusive. The American football stadium is open most the time for anyone to go in, the gyms are free, the basketball courts are free. The perks are endless. It’s probably a good thing you have all that access to sports facilities because you’ll find yourself gaining a little weight. Thanks to the incredible food. 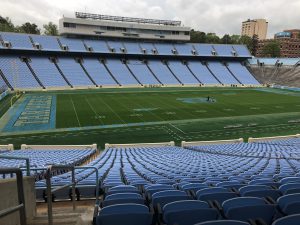 Since I have returned from my study abroad, I have not spent a penny on food in London. Why? Because it’s ‘trash’, as Americans call it. Honestly, the food there is so much better that you won’t want to spend your hard-earned money on English KFC and Sams Chicken ever again. You’d rather save it for when you go back to America. The food options are endless. All the food chains you hear about on the internet are there, and yes, they are very good. Chick Fil A, Wendy’s and a ton of other places you won’t have heard of but are very popular. The food quantities are substantial, and the prices are very fair. Every area in the US has food which is unique to it too. For example, North Carolina is considered ‘The South’ and so there’s lots of southern food floating about everywhere. North Carolina ice sweet tea is a thing, it is served everywhere, and it is utterly wonderful. Every state has some exclusive restaurant chains too which are always worth exploring. North Carolina has a place called Cookout where you can get a massive burger, fries, hush puppies, a quesadilla and an enormous milkshake for $7. That’s basically £4. Imagine all the meal deals you’ve had for £3. Throw in an extra quid and you’ll get all that. Unbelievable Jeff. I know most of you won’t have heard of hush puppies before. Take note that you’ll have lots of food there that you wouldn’t have had before. All the universities will also have a dining hall which is basically a buffet. The students there are so spoiled with good food that they don’t think it’s all that great but the food in the dining halls is easily comparable to the quality of food at Wasabi Sushi and Bento or other semi cheap options in London. It will have burgers, pizza, ice cream machines, unlimited cookies, and so much more. Don’t hesitate to spend money on food there because there are so many more options than in London and you’ll rarely regret the food you end up buying. There’s also a lot more Mexican food and emphasis on dishes that aren’t so big in London. The same way London doesn’t have many burrito places, American cities won’t have so many Thai food places.

The universities out there are a textbook definition of what a university should be. Fun times, big campuses, loads of people, great weather, good food etc. Everything you’ve seen in the movies is real. It’s not a façade. Those massive campuses you see with an American flag planted in the middle of a park size courtyard actually exist. All those frat parties and stories you hear about actually happen. And this is your opportunity to go out and see it close up. You might even realise you like it way more than what you currently have going and alter your life to end up there one day. 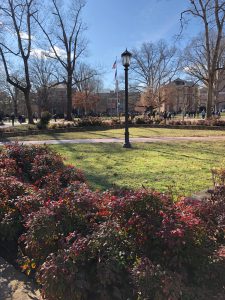 Ultimately the saddest part about the experience is that you can’t properly express all your new learned knowledge and experiences to others. You can read this and pick up that people have different social norms in other parts of the world, but you will not nearly grasp the extent of it until you see it for yourself. I can sit here and tell you that you’ll learn new things, but you won’t truly understand this until you go abroad yourself. This is one of the few chances you’ll have to go abroad and be a fully functioning member of that society, as opposed to a tourist. And as a result, you’ll learn so much. Not only will you learn about the world more and what different places are like, what different people are like. You’ll learn about yourself more. You’ll come to realise what you truly like and don’t like. I’ve lived in London for 15 years and so I’ve never experienced not living in a big city. But now that I have, I’ve realised that I like the quiet life way more. I prefer the nature and scenery to the hustle and busyness of London. You’ll learn about yourself and what you give priority to. On top of that, you’ll learn about the world. What different people around the world are like and the ideas they have. How they approach problems and their outlook on life. And that’s a type of knowledge you can never have too much of.