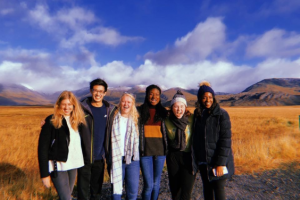 I had two major adjustments when settling into my new life at King’s: the logistical side of setting up accounts, etc. and my new social life.

Regarding the logistics of adjusting to life at KCL, there are two main types of study abroad students. There are those who come over as a part of a university program and those who come over on their own. I am one of those who came to King’s without a group or a program. At first I thought I had no one to go to if I needed help or advice. But, happily, I was wrong.

One’s first couple of days in London are bound to be a bit fraught with sorting out BRP pick up, banking, and phone situations. I know that I struggled trying to tackle all of these situations alone. But helpful people are everywhere; you just have to know where to look. When I (finally!) reached out to the Global Mobility office they got me sorted right away. They taught me how to generate my Confirmation of Study Letter and told me what I needed to say to the bank in order establish an account as an international student. They also had a list of student-friendly banks that they supplied me with, and they were just overall helpful faces in a new place. With their help, the stress of those first few days was lessened hugely. I did not need a university group from the states in order to feel supported at King’s because King’s had an office in place to help people like me! GMO became an ongoing resource for me throughout the year.

Socially, coming to a new country alone can seem daunting. In the first week of the fall term, King’s hosted a social exclusively for study abroad students. It was there that I would meet my dearest friends and the people who would define my year at King’s. We had known each other for a day or maybe two when we decided to go on our first adventure together: we booked a super reasonably priced flight to Iceland for the first weekend of term. It was incredible to get to see the northern lights and experience the hot springs, and I was able to do it with a new pack of fast friends. We would end up spending most of our free time together. If I had never gone to that social, I would never have met those incredible people. That social was one of many new student and study abroad student activities! You never know who you’re going to meet at those.

Settling in to a new country and a new university can be really stressful. But you will make friends and you will hit a stride. After all, we’re study abroad students! We’ve done this before as first years. Now, we’re just doing it in a new place. Settling into King’s may seem daunting coming from wherever in the world you come from, but there are systems in place to help and there are loads of new people who are excited to meet you. So go forth and leap in headfirst! There’s no reason to hesitate. After all, you may just end up in Iceland with forever friends that you met two days ago.