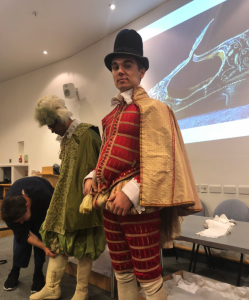 I study English Literature with an emphasis on early modern dramatists and I could not have found a better university to study my particular field.

In the fall, one of my courses was Shakespeare’s London and it was held inside of the Globe Theatre. We were given lectures by people who made the Globe into what it is today. It was a truly unique and amazing opportunity to get to study at the Globe Theatre, but that’s the kind of experience that you get at a university as established as King’s.

My fall courses were all four taught by leading scholars in the specific field of research that the class was being taught about, which was so cool and not an experience that I had at my university in the states. I learned to appreciate things like the sonnet form in entirely new ways from Professor Scott-Bauman—she showed me Heaney’s take on the sonnet form and then pitted it against the contemporary, American poet, Tyehimba Jess’ take on the same format. She invited the whole class to speeches and workshops on the sonnet form that she organised that were being attended by internationally renowned scholars. It was the best of both world because professors like Dr Scott-Bauman seamlessly infused passion into the notoriety and opportunities that sprang forth from their being a leader in their field. I got to be torn apart for my writing style and then rebuilt by people at the top of my field, and it was tough but so refreshing to get new criticism from my professors.

In the spring, I took three modules, two of which have forever shifted my perception of the early modern period. The modules were ‘Gender, Culture & Power in the Court of Elizabeth I’ and ‘Mad World My Masters: Performing in Jacobean Culture’. For Mad World, we were given access to the Senate House Library and required to conduct in-depth research on our chosen topic while at the Senate House. One of the module conveners was Dr Lucy Munro who is on the forefront of early modern research and critical analysis. She designed the Sam Wanamaker Playhouse at the Globe. I knew who she was prior to taking her module, so it was so exciting to walk into the first day of spring classes and get to hear from her!

King’s is a great place academically to study abroad because it is rigorous and you will learn a lot no matter what your subject matter. However, you only take three or four modules at a time so a lovely balance is struck because you still have time to absorb living in London and to travel and have an active social life. It won’t be a year off academically by any means, but you can definitely find a balance. I still had time for two internships, a sport, and lots of travel. And I’m leaving my year at King’s with a better knowledge of how to write scholarly work and a dedication to doing my research correctly and well.