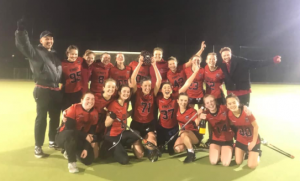 This year has been the most challenging, fun, and growth-inducing of my life thus far. I can honestly say that this is the case because I was able to jump at each of the opportunities placed in front of me.

KCL lets you participate in as many or as few clubs and societies as you desire, and it was because of this that I was able to build a dynamic and amazing year. The way that the British approach clubs and activities is a lot less time consuming than the American way. Each society that you are a part of will probably only meet once a week. Sports usually only meet 2-3 times in a week. So get out there, try several clubs, do what you enjoy doing. Opportunities abound and if you want to explore, grow, and push your own limits, King’s is the place to be.

I went to the KCLSU student fair in September and subsequently joined lacrosse (the best club at King’s). I co-wrote, directed, and produced a play at the Hen & Chickens Theatre, had two internships in London, and visited 13 countries. I had friends who did tennis and the journalism club, a flatmate who leads the tech society, and several people who participate heavily in the King’s Players throughout the year. King’s has an inordinate amount of opportunities and exciting options for you to explore, which is especially exciting for us as study abroad students because you can be anyone you want and cultivate entirely new talents in your time abroad! I know that I did—this year I was given the chance to learn basic carpentry and build sets for Questor’s Theatre in Ealing Broadway (where Dame Judy Dench in the president!) which is something that never would have happened if I hadn’t been living in London. So much is offered at King’s because you are living at the literal centre of the western world. You can easily get around Europe and the UK from London and you will meet people from all over the world. As an American, I had one close American friend. All of my flatmates and friends are from every corner of the world that you can think of. That was a definite pro of living and attending university in the heart of London.