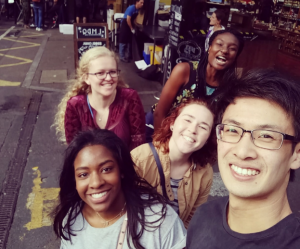 King’s is an incredibly international university. For instance, my flatmates and I represent 9 countries between us with no repeats. Our kitchen is a beautiful amalgamation of smells and spices from all over the world, which is an experience I would have never had outside of London and outside of King’s.

KCL is also a stellar university academically and your professors will most likely be famous in their field. But more than that, King’s supports the whole you. Want to be super involved in five societies? Do it. Want to travel every weekend? You can make that happen, too, on a budget and without falling behind in your studies. I know several kids who made that their pastime. Want to have an internship in the heart of London? Also completely possible.

King’s is uniquely situated by virtue of their location and history to provide you with the ‘real’ London experience; whether you study at Strand or Guy’s campus you’ll be in the halls where many great minds have come before you. You can’t escape the history of a city like London or an institution such as King’s. Even on a night out, you’re being immersed in London life. On Wednesdays for sports night, Guys Bar is where you go with your team, and you’re quite literally at London Bridge.

King’s has a terrific location as well as a great reputation. If you do apply for that internship and you mention that you’re studying abroad at King’s, that name carries weight and institutions have a lot of respect for KCL. Between the global student body, the ‘London experience’ that you get, and the benefit of attending a fabulous university with a stellar reputation, King’s is the best university to study abroad at in England.