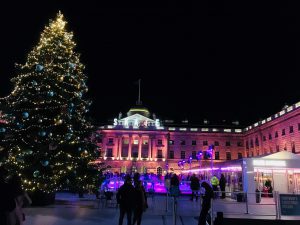 I picked my King’s modules to give me a more international, interdisciplinary perspective than my American-centered classes at Bowdoin. Memory in Modern Spanish Culture looked at the history of Spain in the 19th and 20th centuries through different forms of art.

This class introduced me to examining art as a framework for looking at public opinions and reactions to politics of the time. Similarly, Early Modern Europe I: Society and Religion from 1500 to 1700 showed me how religion and belief affect how a society forms its systems of ruling, from monarchy to more representative government. Sociology of Politics gave me a more theoretical way to look at politics. By understanding people as social beings, political phenomenons such as such as support for xenophobic politicians can be understood by human’s inherent need to feel part of a community, and therefore feel hostile towards an out group. War in International Order examined how different systems—from capitalism to patriarchy, are influenced by war and similarly work to influence how war begins and plays out. We discussed the U.S. frequently in this class, as it is such a large military presence, and theorizing the U.S. from an outsider’s perspective made me look at it more critically. My King’s modules expanded my ideas of what political expression and participation looks like, and helped me recognize that religion, artistic movements, and more are very useful for gauging the political climate of a country.

I was struck by how students in my classes had such global educations—not only did they often speak multiple languages fluently, they also had a deep understanding of the political events happening all around the world. Comparing my international knowledge to my King’s peers has helped me recognize how much my world view is lacking. Rather than discouraging me, this has inspired me—I am now re-learning Spanish, and making an effort to learn more about other current events worldwide through reading the news. I don’t do this for any academic reason, but rather with the hopes that expanding my world knowledge will help me engage with more interesting, international people such as the students I have met at King’s. This motivation to become a more global citizen is just another way King’s has made an indelible impact on who I am and who I wish to be. While can only wish I had more than the three months here, I’m sure that the confidence and perspective I have gained at King’s will last me forever.