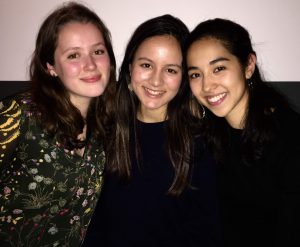 Coming to King’s knowing no one was initially intimidating, but ultimately forced me out of my comfort zone and gave me the most rewarding experience possible. In the first days I explored London on my own. I’ve always spent time by myself, but doing so in a huge city surrounded by people felt very different—they made me hyper-aware of my situation, and self-conscious.

I eventually leaned into this discomfort and loosened up, realizing no one cared that I was alone, and also the fun of exploring a city on my own. I enjoyed visiting museums, shops, and eateries by myself, indulging in my particularities like thumbing through cookbooks for hours at bookstores or staring exceptionally long at whatever morbidly fascinated me (aka the mummies at the British Museum). Without the worries I was holding anyone else, and no schoolwork, I spent my time in a way which felt shockingly indulgent—walking down streets simply because they looked pretty, people-watching, and overall making taking in my surroundings an act in itself. I later came to learn that the need to feel productive and busy all the time is very American, and something to unlearn.

My lack of a social safety-net encouraged to be bold. I’m relatively shy, but in I capitalized on the fact I was only in London for 3 months. Who cared if I came off as the an overeager person with no friends? Number one, that’s exactly who I was, and number two, I was leaving in a few months and my reputation wouldn’t suffer any long-term consequences.  Randomly introducing myself to other students worked surprisingly well as a tactic, and I eventually made friends from France, Germany, Cyprus, and Brazil.

I marveled at how well elements like humor or shared taste in music could bridge a cultural divide so well, and also how deep our relationships quickly became despite our divergent backgrounds. I loved learning about their culture’s language or food, and also more serious political events in their countries. Learning about the personal impacts of events like Brazil’s controversial presidential election, Brexit, and the Yellow Vest Protests provided an added depth to what could seem like abstract stories taking away far away, and to this day my communications with them make me a much more informed person and international citizen. These friendships were the highlight of my experience and beyond anything I could have hoped for coming into King’s.