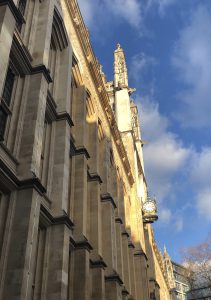 Being able to study in the center of London was an experience that I will forever appreciate. The city has it all: any kind of cuisine you can think of, any kind of shop you could ever need, and a million sights to see. Being central is crucial, and King’s provided that experience perfectly.

During my semester at King’s, I lived in Southwark and took the bus or tube easily to class every day. Sometimes, when the weather was nice (which happened more often than I expected in London), I walked to class, and my favorite part of the journey was getting from Waterloo to the Strand.

The city that I’m most familiar with—Manhattan—is an island, and so there was one aspect of London that I was absolutely obsessed with: the river and its countless bridges. I love the presence and power the Thames holds as it cuts through the center of the city. Though it geographically divides London, the river also unites it through numerous bridges and the constant view of a city skyline from each side. I loved walking across Waterloo Bridge—or any bridge in London, really—and seeing all the buildings and sights lined up against the water, as well as the adjacent bridges lined up left and right. No matter if the sky was gray or clear, the view from above the water was always a serene, surreal feeling. From Waterloo Bridge, you could see the London Eye, lit up red at night, and Westminster and Big Ben further down on the other side of the river. Move a bridge down, and the view would be different but just as beautiful.

I was equally obsessed with the museums in London. Almost all free, and all housed in intricate buildings that could be deemed fine art themselves, the museums amazed me. They added to the feeling that London was a global city—perhaps the most global city—and showcased art, history, and science from everywhere in the world. Even a London-specific museum like the Museum of London taught me so much with its artifacts and recreations, spinning stories of the multifaceted city. Every museum has something unique to offer, even the ones focused on European art: the Wallace Collection is intimate and narrowly curated, while the National Gallery triumphantly bears large, important pieces on massive walls.

Finally, the transportation system. Delays are the norm in New York, but rare in London. Both the Underground and the buses are insanely efficient, and missing your ride means just waiting a minute or two before the next one arrives. The ability to pay with a contactless card is so convenient—even as I traveled through the rest of Europe during my semester, I couldn’t find a transportation system as good as Transport for London. From this combination of effective public transportation and living so centrally, everything I wanted to see in London was always within reach.