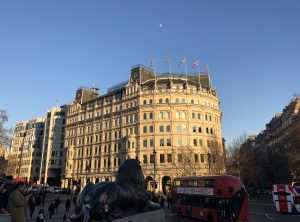 But by European standards, I’m not sure that my American “specializations” would be considered enough expertise—something that I instantly realized once I set foot in a King’s classroom.

At King’s, and seemingly in the English university system in general, students are much more focused on one area of study. My full-time peers at King’s didn’t have to satisfy the liberal arts or general education requirements of American schools; as a result, they were arguably more well-versed in the specific subjects we discussed. This was particularly apparent in my module Politics and Culture in Cold War Germany, a second-year module and my favorite of the four classes that I took. My classmates, largely pursuing degrees in European Studies, had extensive knowledge of modern European history, both from the university work they had already done and from earlier schoolwork in the various European nations they hailed from.

Feeling both inspired and slightly intimidated, I learned an incredible amount in this setting. My instructor for the module was Professor Katrin Schreiter, who was German herself. She was such an articulate and impactful instructor, and though the lectures were early in the morning, I easily pulled myself out of bed to listen to her speak. The readings were also informative and varied, and by the end of the semester, I was completely convinced that Cold War Germany was the most interesting topic in history. When I applied to write a senior thesis for my home university, I proposed a topic about and East and West Germany. I have King’s and Professor Schreiter to thank for that inspiration, and I cannot wait to start my research next year.

My other modules at King’s were also wonderful. I learned about British history from a variety of instructors in two history modules, and bounced around ideas of ethics and politics in a philosophy module. I was surprised by the structure of university here: there are less class hours, and less assessments. My modules only had two essays as assessments, which was both a relief and a source of stress. There was less work to stress over, but those few assignments held so much weight.

Ultimately, my academic experience at KCL not only expanded my knowledge from a European perspective, but also taught me how to be a more independent student. It was up to me, with my increased free time, to do my readings, review my lectures, and write my essays at a manageable pace. It was certainly different from my academic life at home, and I’m grateful that I was able to experience it.