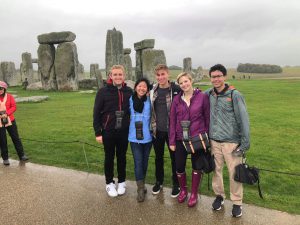 Studying abroad at King’s College London is one of the best decisions I’ve ever made. When researching places that I wanted to study abroad, I had a list of criteria to keep in mind, and King’s checked all of those boxes. I wanted to be in a big city that I could endlessly explore, and King’s location in central London gave me incredible access to amazing landmarks, neighborhoods, and experiences. I loved being in the heart of the one of the greatest cities in the world, and I loved the way that King’s interacted with the city around it.

Two of my modules had local field trips tailored to the material we were learning, and that direct connection between city and school helped cement my understanding of the literature and history of the UK. I can learn about Shakespeare, the 1926 general strike, and Margaret Thatcher all I want in the United States, but there’s something so unique about being in the exact location where the things you learn about took place. I took a short trip to Dublin and visited the Abbey Theater, where a play I had written an essay on was first performed. I was in awe that I could read this material in class and then turn around and visit where these monumental events happened. I felt like King’s made a real effort to embed its curriculum in the surrounding area and remind students to take advantage of the world around them.

I also found that King’s students were so kind and helped me feel comfortable in this new environment. I was initially worried that the British university system would be too different from the American version and that I would struggle in all my courses. Although it certainly was different, the professors walked me through any questions that I had about the module, particularly when it came to technical things, such as essay formatting, participation expectations, and workload. My presentation partner for my Political Economy course sat with me in a Pret a Manger for two hours explaining how British government worked because I could not wrap my head around the Parliamentary system. It may have seemed like a normal thing to him, but it meant the world to me. I became comfortable asking questions in class, questions that might have been obvious to British students but weren’t for me. These questions were met with honest answers and careful explanations of the material, and I was so grateful for that. It’s the type of welcoming environment helped me feel like I could succeed in a completely new country, and I know other study abroad students will have the same experience.