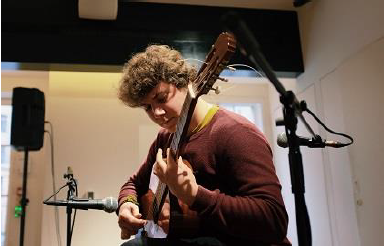 Having studied in the most central University has been a life changing event for me. I had so many adventures and stories that had a massive impact on my life. One of them was a performance I had at a gig called Student Sounds that was organized by the Culture Lounge in the Arcade at Bush House. It was during my first week at King’s, when I attended an event where I met Faye Mahoney, as she was in charge of the culture events I told her that I was a guitarist, she immediately asked me if I would like to play at the Arcade alongside five other students, and I said yes of course. It was a challenge for me as I had never performed in front of people. Two months later, I was there playing in front of some 65 persons playing my adaptation of a sixties French pop song and a prelude of Bach. After I finished my performance, everyone applauded. After the last performer finished we all gathered in front of the crowd and we got applauded for five minutes. I came back home after that feeling so happy because I achieved something I would have never had the opportunity to do anywhere else.

Another thing that I experienced in London was the pub crawls. As I was very much desiring to discover London’s Nightlife, I found out about the pub crawls where people meet at a bar and then continue through many bars until they end at a club, thus offering the opportunity to discover many bars at once. My first one was at the trendy Shoreditch, as I got in the first bar, I met people from all over the world. It was amazing that in every bar we went to, we would meet new people and they would join us on to the next one. The tour ended at a club where I danced, drank and partied to the end of the night with people I had never met before in my life.

Two weeks after that event, I went on a Saturday night to the Banana Pub Crawl, where it ended at the Ministry of Sound, one of the most famous clubs in the world. As soon as I got to the first bar, I met a group of French and as we went to the next bar we were close to 200 people walking in central singing drunkard songs. And so we continued the crawl until the club where we stayed until 4 in the morning. The club had six different rooms where every room had its own type of music. I made lots of friends and I was very happy to have been able to experience the London Nightlife in a way that was very unlike all the nights I had in other cities and places in the world.