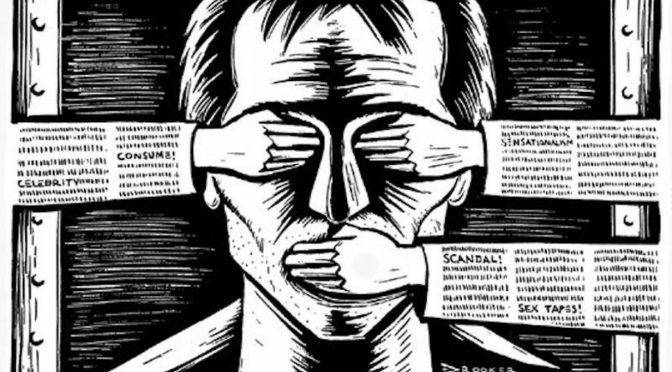 I wrote ‘NewThink’ back in 2019 while at a three-month, 9-5 journalism internship. When my editor asked for daily progress reports, I would minimise the story draft I was spending six hours of each day working on and open an article rushed in the remaining two and pretend it was closer to publication ready than it actually was.

The story is a continuation of the ideas in my first two published shorts: ‘Glass’ (published by STORGY, Quail Bell Magazine, and Lotus-eater) and ‘An Abstract Feat’ (Sweet Tree Review). I did not want to leave the subject of post-creativity alone yet, so set the new piece in a similar story world to a section of ‘Glass’ and the entire backdrop of ‘An Abstract Feat’ – to quote ‘NewThink’ directly, one determined by “the government’s illegalisation of public creative expression and abolishment of the industries relying on it: writing, music, film, theatre, television.” The story follows an unnamed narrator employed by “N. T. F.” to eliminate one of the few writers still writing as part of the underground creative network “The Resistance.”

As 2019 became 2020, I was still sending the piece out to publications and trying to find the right home for it. My success came over a month into the pandemic, both respite from the situation’s difficulty and an opportunity to draw parallels between what was happening and the story’s themes.

After being shortlisted for Ouen Press’ 2019 Short Story Competition, my first rereads of the piece for months – when it was relegated to subject line and attached as a word document to enough emails to irritate a small country – struck a chord with the concrete reality around me: an arts sector completely on its knees. The prospect of a post-creativity dystopia was suddenly not quite so unbelievable.

‘NewThink’ was not fortunate enough to win Ouen Press’ competition, but its shortlisting saw it included in the print collection Zawadi & Other Short Stories published at the end of the summer.

It was also reprinted in Issue 12 of Lotus-eater and exhibited online in Quarantine Art Exhibition, so this piece was responsible for some of the few positives in an otherwise taxing year. The print publication was a landmark in something usually self-dismissed as “hobby” or trivialised as “pastime.” With much of 2021 already assigned to protecting our health service by staying indoors and sitting at my desk, ‘NewThink’ offers a reminder to keep working hard and see where this writing takes me.

Breakdown as public spectacle. Bypassing any system of queue or vendor, choosing their own seats, they decorated the side of the street as I capitulated in the centre of it. I fell apart in front of the audience, to great applause. I’m only what they’re keeping bottled up. I’m a personal sum of the collective parts: unease, discomfort, agitation, angst. Ordinarily they bubble beneath the surface, only threatening release. I exploded the surface, scattering these parts across the road. I rambled about the end of the world, shouting at whoever would listen.

Later, in a more private setting. One of those moments I was alone but for my own thoughts. In my head it was simple: I intended to kill him in order to become him. Somewhat. In my head there were parallels with Chapman and Lennon. I’d take his life and in some way add to my own, consuming a part of my Lennon surrogate: a conversely pathetic, insignificant creative mind, equally driven by the delusion that his “work” would save the human race. This was the job I had been given. I too would take careful, meticulous steps to do it. Plan it over months, structure it around a series of encounters. There are no such obstacles as security or protection here, but I had to ensure that I enjoy the process. I need to. Otherwise what’s the point.

She wakes up each morning wondering exactly how the world will end. She loses hours of her day listing the different alternatives in her head: exactly when, by whose hand, a result of which mistake, which ignorance, which oversight. She’s a five-year-old going on fifty. This anxiety cripples the Girl, day in and day out, as do those belonging to the “family” she’s so often reminded she’s a part of.

The Father is desperate to cling onto the last modicum of stability in a world gone to pieces. His anxiety requires a bit of context. It’s all since NewThink, the government’s illegalisation of public creative expression and abolishment of the industries relying on it: writing, music, film, theatre, television… the list goes on. The Father, a prolific and once successful novelist, had no choice but to carry on writing as part of the illegal underground network for the eight years separating then from now.

Underground, the issues contemporaneous to the world pre-NewThink were still what everyone wanted to write and read about. The Father couldn’t relate to any of them. He is white, straight, male – justifiably, people don’t want to hear from people like him at the moment. There are far more important things to talk about, and far more urgency that this conversation be heard now that the volume’s been turned down and it’s been relegated to below ground.

Moralistically, the Father finds himself in the difficult position of recognising the need for a newer, more diverse palate of voices, but being unable to offer one himself. The powerlessness sickens him. He’s also not a very good writer, but he needs to be able to put food on the table.

His son, the Boy, is crippled by an anxiety that could almost be context free and is applicable to many at his point in life: the anxiety of whether or not he suffers from anxiety. Almost two decades on the planet, he still barely knows the person he should best, even if he recognises the face in the mirror. His morning wakeup coincides with the same incongruity each day: “Is it all in my head?” He would die for the opportunity to spend twenty-four hours in his own company, able to see himself from the outside and realise that there’s nothing noticeably wrong with him, be comforted by the knowledge that he looks fine.

The Mother’s is the most straightforward of the four. The worry that something terrible will happen to her two children will attach itself to her, burrow deep into her head and refuse to leave it. The chance of this happening is statistically more likely than eight years ago, so she sees the danger in everything: quietness must mean something loud and dangerous is around the corner, good fortune must mean bad is imminent, niceness must be nasty in disguise, etc.

I became the involuntary fifth member of this family on a cold November morning almost two weeks ago. I blew in with the wind and slotted into arrangement as if I’d always belonged there. My entrance was timely: I staggered in as the Father and the Boy were locked in conversation that had reached boiling point. ‘… Stop trying to convince me that he isn’t me! My friends agree; it’s clear as fucking day. Why even bother calling him Hal… it’s clearly me.’

‘You know I’d never do that. I always separate my life from my work. Have to. ’

‘You’ve done it again. You’ve used your book to say what you haven’t got the balls to say to me in person.’

‘I agree. A self-loathing teen too smart for his own good, second guessing his own therapy? The heroic parents there to save him? Do you think I’m stupid?’

‘You’ve got it completely wrong. I know there are similarities, but he’s not you.’

‘I do know there’s something wrong with me, you know. This is M.E. we’re talking about. Writing about what’s wrong isn’t gonna make it right.’

I was watching people watch themselves. Tired of listening at the doorway, I planned to glide in, contribute something along the lines of “But then he’d have nothing to write about.” A segue into joining this rich debate, this relationship-destroyer that I find perversely fascinating. I only managed an inelegant stumble, followed by an attempt to clear my throat, which devolved into a coughing fit.

‘Who are you? What are you doing here?’

I finished clearing my throat before I responded. The Boy looked pleased that there’s finally a new voice, a deflection from the Father’s.

‘I was just passing by. I’m not from round here. I’ve nowhere to stay and was wondering if I could stay the night. I have money.’

I was Joseph, a month early and without the pregnant Mary. ‘

We don’t do that kind of thing. You could try further up the street, but it’s unlikely.’

Since the world changed irrevocably those eight years ago, the archaic culture of welcoming in the weary traveller had not exactly seen a comeback. People were even more cautious these days. So, I tried a different approach: ‘I couldn’t help but overhear you. I love the Hal saga. Glad was my late-twenties bible. Adult Undergarment is seminal. I’ve read them all and I’m a big fan. Is there a new book on the way?’

‘How did you know where I lived? People aren’t supposed to know that.’

The worry was palpable. The safety of his family is an anxiety he shares with the Mother. Or, it’s his own safety that worries him.

‘I know people. Your kind of people. I’m a writer myself.’

The underground writing community survived entirely on internal trust. It was self-sustaining because it cautiously welcomed in new writers, no matter how dangerous this got as civilisation continued to crumble. The generations of writers pre-NewThink “made it” the same way I intended to; or so goes the story I was fabricating. They were unforgettably associated with or indebted to their contemporaries: Joyce and Beckett, Tolkien and Lewis, Eliot and Pound, Fitzgerald and Hemingway. Once canonised and now outlawed.

To me: ‘Please, take a seat. You must be tired, wandering the street at this time of night.’

The Boy returned with a scotch and placed it on the table in front of me.

‘Where did you say you were from?’

I hadn’t, so did. I then proceeded to feed the narcissistic writerly ego for the next two weeks. It didn’t take long to win him over and gain his trust. I had successfully established the lie necessary to complete the task I’d been sent here to do.

George is a second year PhD candidate here at King’s, completing a thesis titled ‘The “never-ending end of everything”: Considering ‘post-postmodernism’ in the work of Percival Everett, Jonathan Franzen, Zadie Smith, and David Foster Wallace.’ George is a graduate of the University of Reading, as well as a published writer of short fiction and freelance film writer. Recent journal publications include Lotus-eater, Luma Quarterly, Off Screen, Tales from the Moonlit Path, and Vague Visages.

You can find details of George’s work at: