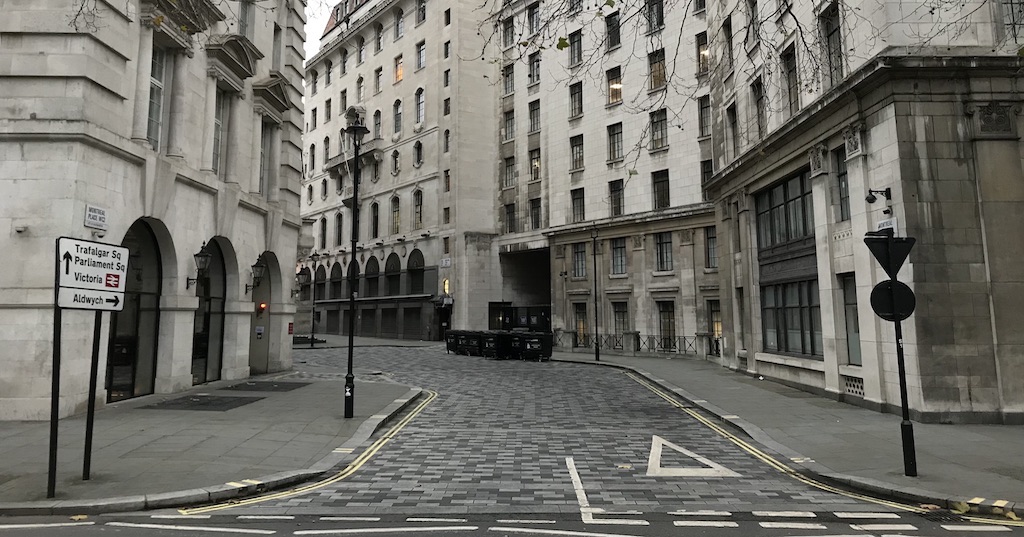 WOOLF’S WRITING HAS BEEN A PART OF MY LIFE FOR SO LONG I NO LONGER KNOW IF IT TAUGHT ME TO SEE THE WORLD THIS WAY OR JUST TAUGHT ME TO NOTICE THAT I DO.

There is perhaps no greater comfort nor reward granted by reading than resonance. It is an indescribable liberation to have our feelings corroborated; to sift through the works of writers centuries past and happen upon an unassuming strand of words that instantly articulates the inarticulable, that echoes an acute emotion lying dormant within. These discoveries serve as whispers through time, as a consoling hand-squeeze in the ether. In my first year studying on the Strand, Virginia Woolf’s 1930 essay Street Haunting: A London Adventure offered me this solace. Woolf’s narrator, having “shed the self our friends know us by,” ventures out into the “long groves of darkness” and “islands of light” of a London winter’s evening, ostensibly to buy a pencil. Leaving the familiarity of the home – “the shell-like covering which our souls have excreted to house themselves” – we are cast out into the unknown. The voice spectrally floats through Holborn, Soho, Mayfair, with the ultimate end being the Strand stationary shop run by a bickering old couple.

Or is the end something rather different? The flâneur – a position in literary history hitherto reserved for men – describes a city-wanderer taken to the streets in search of inspiration. Encountering the shadow of a person who, it transpires, “is ourselves,” and asking the unanswered question “am I here, or am I there?” Woolf constructs an incorporeal, extra-temporal flâneuse who makes not merely a double-journey, but a triple: through space, time and the self.

Flânerie, according to novelist and war journalist Martha Gellhorn, is “as necessary as solitude: that is how the compost keeps growing in the mind.” And indeed, there seems an inextricable link between the flâneur and solitude. Rebecca Solnit described it as that “subtle state most dedicated urban walkers know,” “a dark solitude punctuated with encounters as the night sky is punctuated with stars.” This is what struck me upon my first reading of Street Haunting, how seamlessly and endlessly, while gliding through the streets alone, the voice falls inward.

For in the absence of others, one’s attention is invariably drawn to the self. The self Woolf’s narrator describes is one whose “colours have run,” a self that is “neither this nor that … something so varied and wandering.” We are whole for “convenience sake” but in truth, we are fragmented, fractured, kaleidoscopic. We find shreds of ourselves strewn across the city, “leaning over the Embankment on a summer evening,” in a future that is “even now invading our peace.” This inconstancy, this multiplicity of being; this bleeding across time of disparate iterations of the self is, for me, a distinctly metropolitan sensation. In my first weeks in London, the city had an air of intangibility to it; the Elizabethan and Edwardian architecture, the red buses and swarms of people all seemed reduced to two-dimensional iconography. The lavish surreality disorientated me in an almost claustrophobic myopia – I was hyper-focused on the pavement, then on the white stone, then a flock of pigeons, then the warm flush of bodies flowing past me. It felt as though if I were to walk to the Royal Courts of Justice, the Savoy Theatre, or Eleanor’s Cross, and place my hand up against its cold exterior, it would simply fall through. My isolation in the city bred an unprecedented sense of detachment from the material world, one which was entirely alien and unfathomable to me – Wordsworth’s “dim sadness – and blind thoughts, I knew not, nor could name.” Then, upon reading Woolf’s flâneuse “gliding smoothly across the surface,” upon meeting those “bright men and women, who, for all their poverty and shabbiness, wear a certain look of unreality,” I was given a name.

FOR THE EYE HAS THIS STRANGE PROPERTY: IT RESTS ONLY ON BEAUTY; LIKE A BUTTERFLY IT SEEKS COLOUR AND BASKS IN WARMTH.

Woolf claims that “after a prolonged diet of this simple, sugary fare, of beauty pure and uncomposed, we become conscious of satiety.” This distillation of beauty resonated with me; the metropolitan landscape is one of beauty optimised, beauty both formless – “uncomposed” – yet built. And, as Sam Wiseman puts it, “it is precisely when civilisation and progress most confidently assert themselves that their fragility and contingency become most apparent.” The masquerade of “beauty pure” that the city upholds is immediately inviting for the wandering eye, but is ultimately fickle. The city is fallible, as we are fallible; the city is multitudinous, as we are multitudinous: as Wiseman continues, “metropolitan perception facilitates a more sophisticated understanding of the fragmentary, interdependent character of self.” Suddenly, my disorientation was placated. In having this acute ailment articulated, I was grounded, and no longer alone.

“Woolf wrote,” says Rebecca Solnit, “of the confining oppression of one’s own identity.” Street Haunting is a radical text – a radical rejection of the homogenous, single, self, a rejection of the rural/urban binary, a rejection of the notion of flâneur as an exclusively male role. It is one of Woolf’s notorious attempts to, in her own words, “record the atoms as they fall upon the mind,” and to give voice to the mind in its “soliloquy in solitude.” The narrator transcends boundaries corporeal, temporal and personal, forcing us to reckon with questions of the familiar and the strange, and to find in the reconciliation of these a new profound understanding. I cannot recommend it enough – particularly for lonely first-years on the Strand.

Lauren Elkin, A Tribute to Female Flâneurs: the women who reclaimed our city streets (Guardian, 2016) https://www.theguardian.com/cities/2016/jul/29/female-flaneur-women-reclaim-streets

Rebecca Solnit, The Solitary Stroller and The City, Wanderlust: A History of Walking (Penguin: 2001)

James Mumford is a second-year English UG at King’s College London and Subeditor for Strandlines. A frequenter and student of the Strand since 2017, he can often be found scouting for quiet reading spots with moderate-high foot traffic, as to not be distracted whilst looking mysterious and alluring to passers-by.