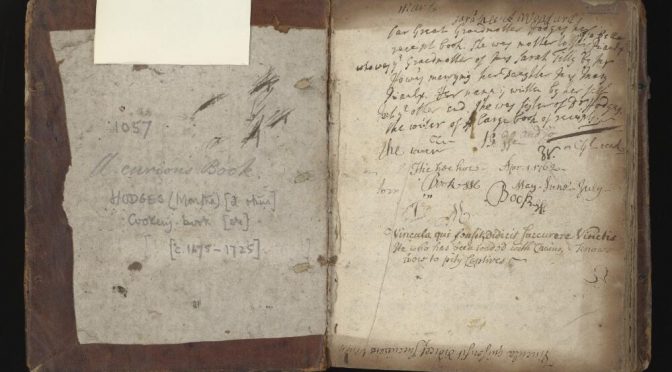 A simple definition of manuscript recipe books is that they are domestic manuscripts which contain household recipes, commonly medical and culinary. During the 1980s these texts were used by feminist historians to recontextualise early modern women as medical authorities. In 1988 Doreen Evenden Nagy uses medical texts in her work to demonstrate women’s ‘central role in Stuart health care’.  However, more recent study has moved away from solely using manuscript recipe books as supporting evidence but has started to look closely at the functions and uses of the texts themselves. For example, by examining how the recipes within these manuscripts were circulated and the social factors involved in their transmission, Elaine Leong and Sara Pennell highlighted the way recipes moved as a form of social currency.

Recipes would be disseminated through social networks by recipe donors as ‘a commodity which flowed between people, the authority and reliability of which was inflected by the circumstances of that movement’.  Recipes functioned as a way to prove one’s domestic skill outside the home by offering recipes to friends and family. However, donating recipes also had an element of risk – if it was trialled by the recipient and found to be unsuccessful, the domestic authority of the donor could be questioned.

The manuscript recipe books written and compiled by women are now also being considered as a form of life writing. As these recipes were used, manuscript owners would document how they have been used in their own lives. In the Temple family manuscript, a recipe for barley water is described as helping the note author’s ‘mother, after [a] miscarriage’. Catherine Field argues that recipe books ‘allowed for the construction of a female self that was correspondingly fluid and in flux between individual practice and coterie […] and became a textual space that enabled women’s positive expression of the self’. In particular, I was attracted to the heterogeneous nature of these texts and the different ways they seemed to function in the lives of their owners.

Aside from being repositories for culinary and medical knowledge, these texts show signs of other uses. Manuscript recipe books were often passed down through families and as a result recipe books could also be considered a textual space to connect with previous generations. Martha Hodges’s recipe book contains a note on the first folio which describes the recipe book as ‘our great great grandmother her receipt book’ and invites the reader to see Hodges’s signature which is written towards the back of the manuscript. This suggests that the signature of the deceased relative was of importance to subsequent generations. Hodges’s recipe book has also been by a potentially younger family member called William as a place to doodle and practice his handwriting.

After seeing the various ways these texts have been used within the early modern home, I became interested in the way that the diverse nature of manuscript recipe books the General International Standard Archival Description (ISAD(G)) by which they have been catalogued by various libraries. ISAD (G) calls for particular mandatory fields to be included within a catalogue, including the date an item was produced and its author’s name(s). This information can then be used to search and find archival material. This can present difficulties when dealing with texts which have been continually contributed to and interacted with over generations.

One also must consider what exactly is being ‘dated’, whether it is the period in which they were contributed to/written in, or the time over which they have been used. I could argue that as these recipe books are still functional, they are still ‘active’ (or at least have the potential to be ‘reactivated’), in the sense that in the twenty-first century, I have been able to use these early modern recipe books to make biscuits.

However, this theoretical standpoint is not conducive to concise and user-friendly cataloguing. Cataloguing fields deal with specificity, and therefore including too much information can hinder a catalogue user’s progress. Throughout my postgraduate study, I learnt to think critically when using archive catalogues and spot incongruities between the archival description and the manuscripts. As a result, I came to the conclusion that due to the sprawling and diverse nature of manuscript recipe books (both in regard to content and use), they lend themselves particularly well to digital humanities projects, which could explore the more complex aspects of the manuscripts use and transmission.

The images in this post are courtesy of the Wellcome Library.