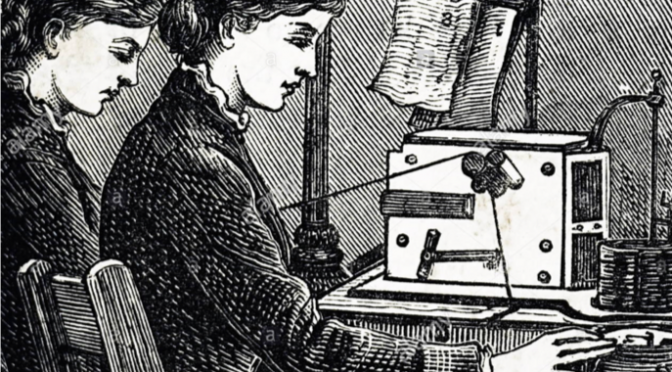 by Harriet Thompson, PhD candidate in the English department at King’s College London.

William John Johnston’s Lightning Flashes and Electric Dashes is a volume of late nineteenth-century American fiction comprised of ‘contributions from the pens of all the prominent writers in the ranks of telegraphic literature’. Johnston was himself a telegraph operator, as well as a publisher, and editor of the profession’s leading trade journal ‘The Operator’. He published a number of notable works of telegraphic literature by women telegraphers, including Ella Cheever Thayer’s novel Wired Love and short fictional works by Lida Churchill and Josie Schofield.

My research explores the ways that nineteenth-century writers represent the electric telegraph and those who operated it, particularly their constructions of gender and sexuality. There’s one story in Lightning Flashes that I keep coming back to, probably because I don’t quite know what to do with it. It’s a text that raises questions about authorship and transmission–themes that are central to much telegraphic literature–engaging with popular notions of sympathy and the spiritual which become associated with technological mediation in this period.

‘A Lady Telegrapher’s Interesting Reminiscences of a Summer in the Country’ is the only story in Lightning Flashes that doesn’t have the author’s full name listed on the contents page. It is attributed to ‘Helen’, but it’s unclear whether this is the real name of its author. It was common for telegraph operators to adopt pseudonyms both ‘on the wire’ and in trade publications to protect their professional career, but that doesn’t bring us any closer to working out who penned this particular piece. The story is narrated by a telegrapher and describes a summer she spent working at a rural hotel office on the advice of her doctor as a break from her city-based work.

Telegraphic labour was understood to be linked to forms of nervous exhaustion, or neurasthenia, particularly in women who were deemed especially sensitive to electrical impulses and thought to suffer more from the strain of repetitive labour than their male colleagues. Throughout the story, the telegraph operator is figured as highly sensitive and sympathetic, qualities that are inextricably linked her profession as a communicator and mediator of messages. Sitting by the lake next to the hotel, she feels the breeze on her face and imagines ‘that I was soaring away through endless space to a far brighter and more enchanting world than this’. Here, she seems to imaginatively embody the electric telegraph, travelling along the network like the messages she delivers as it expands to new and faraway places.

The image of the telegrapher soaring through space also recalls the spiritualist understanding of the material body and the spirit as separate entities. A number of critics have noted the contemporary association between spiritualism and the telegraph. Molly McGarry points out that ‘spiritualists enchanted technologies of modernity–from spiritual telegraphy to spectral photography–for purposes of spiritual contact and connection’. That is, spiritualists drew on modern technologies and understandings of electrical science to add weight to their cause and cast the movement as ‘modern and scientific’. In this story, the narrator is shown to be a highly stimulated and sympathetic mediator, drawing energy from other people’s messages in her work, and seeking out their stories in her leisure time. She is associated with the telegraphic technology that she operates, becoming a conduit for other people’s stories as she lends them a sympathetic ear. In this sense, the telegraph operator is a kind of medium, well-practiced in listening, decoding and transmitting messages.

When walking by the lake one Sunday, the narrator encounters a former telegraph operator whom she has recently met at the hotel. He looks troubled and doesn’t recognise her at first, but she draws him into conversation:

“Believe me, I sincerely feel for you,” I said, in a tone of as great tenderness as I could utter the words. “So far as my own experience goes, I have often found great relief in telling my troubles to another whom I knew would sympathize with and perchance be able to aid me. I should like to ask you to make a confident of me”.

The man is encouraged by her sympathy and proceeds to tell her the story of his tragic romantic past. His fiancée, we learn, was killed in a railway accident a few months before they were due to be married. He describes his initial attraction to this woman as a spiritual one: ‘Her sympathy struck a chord in my heart long dormant, and in all probability rescued me from being now classed among the great army of drunkards. My heart yearned after sympathy’. The separation of spirit and body seems to be a requirement of this sympathy, which in Adam Smith’s Theory of the Moral Sentiments is defined as rooted in the imagination: ‘By the imagination we place ourselves in his situation, we conceive ourselves enduring all the same torments, we enter as it were into his body, and become in some measure the same person with him, and thence form some idea of his sensation’.

The woman telegrapher’s skill, like that of the spiritual medium, is her ability to enter as it were into the body or spirit of another in order to understand and communicate their thoughts and feelings. Indeed, the influence and operation of the electric telegraph was frequently understood in terms of the philosophy of sympathy. In his book Telegraphic Realism Richard Menke quotes an 1881 article in the Scientific American which refers to the ‘moral influence of the telegraph’, claiming that ‘the touch of the telegraph key … welded human sympathy and made possible its manifestation in a common, universal, simultaneous heart throb’. This rather unusual story from a volume of telegraphic literature offers, I think, an interesting insight into the ways in which the languages of technology and spiritualism coalesce in the nineteenth century. The woman telegraph operator becomes a conduit through which to represent shifting understandings of sympathy, sensitivity, and connectivity in relation to instantaneous electrical communication.

This article is a repost. It originally appeared on the British Association for Victorian Studies (BAVS) Postgraduate Researcher blog, The Victorianist.