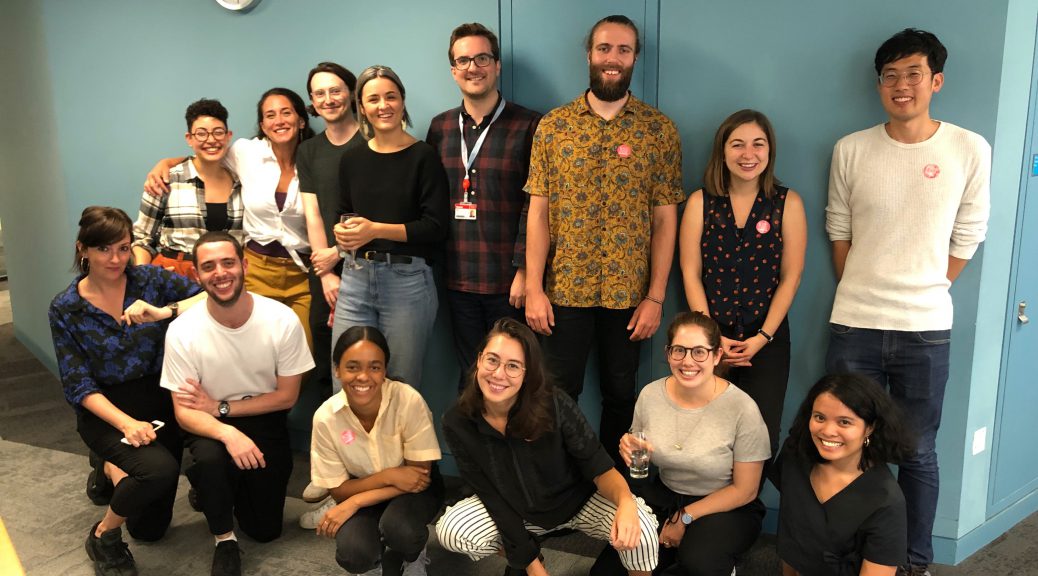 In August 2019, Rafael Lubner and I hosted the third summer conference of Configurations in Bush House’s North East and South East wings. We invited six speakers from UNC-CH’s reading group to present work-in-progress papers. A seventh speaker, due to the risks posed by the current US administration’s punitive visa policies, was able to join us only via video-link. And we were also joined by eight respondents to an open call for papers.

Our theme, ‘Global Flows/Local Knowledges’, was to attend towards the various scales that underpin our contemporary conjuncture of racial capitalism, settler colonialism, climate crisis, and global debilitation. At the heart of this thematic was an injunction to self-reflexive investigation: an interrogation of method. How, in our contemporary moment, do we navigate between the specific and the contextual, the local and the global, the event and the field of circumstances that surrounds it? How do large-scale theorisations of the intertwined violences of capitalism, patriarchy, coloniality, ableism, and climate change relate to the necessity for local interventions, activisms, and resistances? What of theories and practices which refuse the call to scale, instead privileging the minor, the experiential, the fugitive, and the wayward? Rafael and I were also keen to reflect these theoretic and methodological concerns with the embodied and administrative feel of the conference. Our aim of Configuration’s two days was to foreground the bits of conferences that usually take place in the margins – a methodological aim that parallels, resists, and informs our conference theme of scalability, context, and example. We aimed to maximise the times and spaces in which the intellectual energies of conferences often really occur: the conversations over coffee and lunch breaks, the Q&As that operate like seminars rather than back-and-forths, the ideas that click when we have a chance to be by ourselves. We put a lot of work into cultivating this atmosphere. And so did all our speakers and participants, all of whom agreed to share and engage with one another’s pre-circulated work with generosity, courage, kindness, and intellectual curiosity.

Trisha Remetir (UNC-CH): The Configurations of Empire group holds a special place in my heart. Since attending the first conference at KCL three years ago, I’ve come to love the conversations the conference always generates: about contemporary theory, our work, and our place as precarious workers in the university system. The benefit of reading the same writers and meeting every year has made our group closer, and I can now see it in the ways that we challenge each other to develop our ideas and ethics and the ways we approach literature. I can see it in the ways we pick up on conversations about authors and texts from years ago, and reflect on how our positions have changed on them because, well, life changes you. This year we opened up the conversation to make room for scholars not just at UNC Chapel Hill and at KCL, which is exciting. I look forward to more late night discussions of moving towards a world without white supremacy, without prisons, and I look forward to sharing homes, space, and thoughts with them all.

On Friday 16th August we hosted three panels and a keynote by Dr Sita Balani, who presented work on how anxieties surrounding “arranged” and “sham” marriages have been used to police UK borders.

Our day began with a panel titled Settler Fantasies. Andrew Kim (UNC) and Abigail Lee (UNC) led a discussion on two works by Korean American novelist Chang-rae Lee. Andrew Kim talked through Chang-rae Lee’s figuring of environmental devastation and capitalistic futurity – an imaginary which is unable to think outside a world in which capitalism destroys everything but itself. Abigail Lee outlined how Chang-rae Lee’s work depends on, but elides its dependence, on antiblackness. Nessie Nankivell (KCL) then presented her work on Indigeneity, oil infrastructures, and strategies of resistance against Canada’s settler colonialism.

The second panel, entitled Scalabilities, offered three papers exploring questions of example and context in methodology. Carson Arthur (Birkbeck) discussed how categories of “lived experience” in expert discourse surrounding knife violence are used to police young Black people’s lives. James Rakoczi (KCL) presented an account of how myths of epilepsy’s stigmas in global health are mobilised to reproduce systems of economic disparity, and suggested how an “epilepistemology” could be developed to counter these imbricative logics. Nicole Berland (UNC) led a thoughtful conversation on how the concept of “metaseriality” in HBO’s Westworld is imbricated with capitalist, cognitive, and frontier representations of consciousness.

The third panel, Speculation and Temporality, began with two papers on the science fiction of Sam Delany. Sam Fisher (KCL) outlined the ways in which Delany’s work poses problems of abstraction and temporality. Kelechi Anucha presented a meditative and engaging investigation of how Delany’s work led her to think through the discourses of Afropessimism and Afrofuturism. Rafael Lubner (KCL) then presented work on how N.K. Jemisin’s Broken Earth Trilogy can be used to think through the unsettling of the genre of the human and the making and unmaking of worlds.

Nicole Berland (UNC-CH): This collaboration is so special, and these annual conferences have been central to helping me build the kind of academic community I’d always wanted. This year’s “works-in-progress” format felt completely natural in such a generous scholarly environment. It can be hard to share incomplete work, but collaborating with colleagues is exactly how we should go about making our work more detailed and sophisticated. For many of us, the papers we submitted this year developed out of projects we began three years ago during the first Configurations conference, and it was exciting to see how the questions we broached as a group have come to be elaborated and addressed. Also, meeting our transatlantic counterparts has just been plain fun. At this point, we’re not just colleagues, but also friends. How cool is that?

After a pastries and granola breakfast prepared by the lovely team at King’s Venues, Day Two began with our fourth panel, “Mapping Race/Racism.” The co-founder of Configurations of Empire, Dr Christine Okoth (Warwick), presented work from her forthcoming monograph on the relationship between ecology, racialisation, and ekphrasis. Trisha Remetir (UNC) then shared her research on UN legislation which has effected interspecies and international relations in the Philippines Sea and Pacific Ocean. Doug Stark (UNC) then presented work he had undertaken on the function of “play” in the operationalisation of white supremacy in historical video games and its online fandom. Our fifth panel, Gender/Texture/Boundary, began with Emilio Taiveaho (UNC) on the work of Walt Whitman, the Baroque and how the Deleuzean/Leibnizian fold allows him to think through American canonicity in relation to his academic and poetic practices. Rachel Warner (UNC) then offered an account of early-Twentieth century American literatures and its enfolding of national, queered and gendered identities. Our next panellist Savannah Whaley (KCL) discussed the relationship between touch, texture and racial politics in the 1980s New York art scene, focusing on the video-based and performance art of Howardena Pindell. The day concluded with our second keynote Dr Amy De’Ath and a return to questions of the possibility of resistance through a brilliant lecture on value-form and the mis-centring of exchange and wage in Marxist discourse.

Abigail Lee (UNC-CH): This conference is unlike any other. Our participants about friends, comrades, and mentors who work in an intellectual community together throughout the year, which makes the conference that much richer and more meaningful. We think together all year, and so it makes sense to write and revise together, presenting works-in-progress in a collegial, supportive, and powerful atmosphere unlike others I’ve encountered in academia. I got an MFA in poetry writing before starting my PhD, and the Configurations of Empire group reminds me of my poet peers in the best way—they are passionate, attentive, kind, and intensely focused on supporting each other in becoming deeper scholars and thinkers.

The event was generously supported by funds from LAHP, the King’s English department, and UNC’s Institute for Arts and Humanities.

Rafael Lubner and James Rakoczi have been the convenors of Configurations of Empire for two years, and are looking for new volunteers to help continue our project. Get in touch if you are interested.

We have also produced a list of many of the suggested readings that came up throughout the two days of the conference,

or you can explore the schedule of our Configurations of Empire reading group sessions since Autumn 2017, when Raf and I started

or learn more about the Configurations of Empire, UNC website.