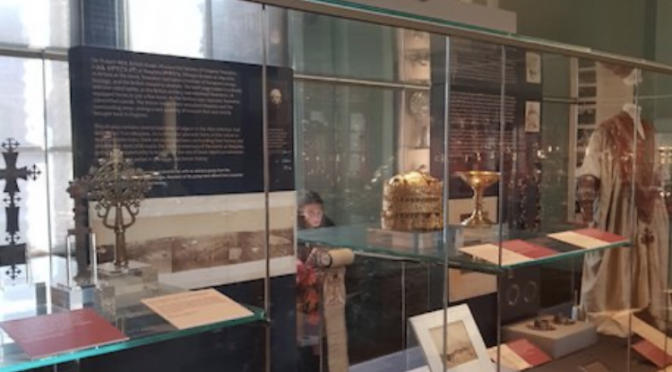 To better understand this fascinating interplay between objects, collections, and museum displays, the Exploring the Institutionalisation of Archaeology seminar series was born. The series was launched by two PhD researchers, Subha Robert William (King’s College London) and Abbey Ellis (University of Leicester / Ashmolean Museum, Oxford). Running from September 2018 to March 2019, we invited PhD researchers, curators, activists and academics alike to present short seminars on their work, providing a basis for further discussion of the broader research area.

The series was truly diverse in terms of subject matter, with speakers presenting on everything from British popular photographic culture in late nineteenth century Egypt to the role of the individual collector in creating object narratives and legacies for sculpture collections. The series was generously funded by the British Association of Victorian Studies (BAVS) and the Faculty of Arts Humanities, King’s College London.

The launch of the series coincided with the Victoria and Albert Museum’s Maqdala 1868 exhibition which commemorated the 150th Anniversary of the Battle of Maqdala. This battle was the final clash in the so-called Abyssinia Campaign fought by the British in Ethiopia, which led to the looting of the Maqdala fortress and the shipment of many Ethiopian treasures to the UK. The exhibition garnered a great deal of press interest so we were keen to invite Alexandra Jones, the curator of the exhibition, to present a seminar focused on her role in bringing the exhibition to life.

The Maqdala objects on display at the V&A included an impressive range of Ethiopian metalwork and textiles including Queen Terunesh’s Kamis and an exquisite 18-carat three-tiered crown. Each object and artefact contained within the display reflected the rich culture of Ethiopian communities. Alexandra Jones spoke sensitively about the significance of displaying these Ethopian treasures. Her presentation contextualised the collection’s position in the museum and fostered thought-provoking discussions surrounding ownership and cultural property. The session provided an important opportunity to elaborate on the V&A’s consultation with various communities throughout the curation of the exhibition. This included the Ethiopian embassy in London, advisory groups from the Ethiopian community, members of the Orthodox Tewahedo Church and representatives from the Rastafarian community. It was only through this discussion that one could gain a sense of the crucial roles that these different organisations and communities had in shaping the exhibition.

Museums still have a long way to go in addressing questions surrounding decolonisation and Maqdala 1868 was by no means perfect, but Jones’s work emphasises that it is not impossible for museums to curate exhibitions with thoughtfulness and sensitivity and to offer a venue for communities whose collections are being included within exhibitions to shape the narrative of the story and the direction of curation.

Sticking with the theme of sensitive and challenging collections, Alice Procter, an art historian and museum activist best known for her Uncomfortable Art Tours (https://www.theexhibitionist.org) joined the series to deliver a provocatively titled talk: Museums are Never Neutral. Procter brought to light stories of human remains collected and displayed in museums without consent, highlighting the objectification and fetishisation evident in the way that many human bodies are sometimes exhibited. Procter’s talk touched upon plaster cast busts exhibited at the Musée de l’Homme, Paris, which were taken in the nineteenth century from live subjects, namely those living under French colonial rule. She expressed her distaste at how these heads are violently displayed on spikes in the Museum in an attempt to turn them into an art display, coupled with the fact that they lack any appropriate contextualisation of how these objects came into the collection. The Museum fails to acknowledge their role in the nineteenth century study of ethnic characterisation, a profoundly racist practice.

Procter’s talk had a wide scope, not only encompassing museum displays but also their gift shops. She challenged the way in which many collections of human remains are merchandised by their museums, asking “Is it really ethical to stock museum gift shops with soaps and chocolates made in the shape of human remains?” This talk was an immensely valuable addition to the programme as it encouraged attendees to cast a new, critical eye over museum collections, holding museums accountable for unethical curatorial practices. Her seminar also equipped viewers with the tools and the confidence to call out unethical practice when it is observed. We left the session with an impassioned desire to bring about real, positive change in museum practice.

The life casts from the Musée de l’Homme were not the only plaster casts featured as part of the programme. The series also touched on archaeological plaster casts, exact replicas of ancient Greek and Roman sculptures made in Plaster of Paris. These were produced en-masse for museum audiences as well as for private collectors in the late eighteenth and early nineteenth centuries. Although they fell from favour with the advent of Modernism, leading many collections to be destroyed, today the objects that survived provoke interesting debates about the evolving values attributed to objects in museum contexts. Historically, casts have been considered as little more than reproductions of ancient masterpieces made in a poorer material; they were often seen as nothing more than teaching tools for learning about the ancient world. However, the seminar series shed a light on just how instrumental plaster casts have been for the development of museums and how they have also helped to shape the study of classical archaeology.

Dr Rebecca Wade (Henry Moore Foundation, Leeds) gave an insightful paper on the subject of Domenico Brucciani, Britain’s most important and prolific maker of plaster casts in the nineteenth century. In 1864, Brucciani opened his showroom in Covent Garden, named the Galleria delle Belle Arti, for the public to enter free of charge. This gallery operated as a proto-museum of classical archaeology, informing the arrangement of the museums that would open during the last quarter of the nineteenth century. Following this, Dr Emma Payne (KCL) gave a fascinating paper exploring the role of casts in the history of restoration. Dr Payne highlighted how the dissemination of casts of restored sculptures across museums and universities encouraged the artificial proliferation of a narrow range of sculptural types and also promoted potentially misleading interpretations of particular statues.

These sessions emphasised the importance of the role of plaster casts in shaping the way in which objects are presented to us in museums and how they have influenced our understanding of original works of ancient sculpture. We realised that our discussions throughout the seminar series had revealed the hidden histories of a relatively unappreciated corpus of objects, encouraging us to take another look at more humble museum artefacts and consider whether they might be a great deal more valuable than first glance suggests.

The theme of uncovering hidden narratives continued in the final seminar of the series, delivered by Dr Amara Thornton (Ure Museum of Greek Archaeology). Dr Thornton spoke on Scripting Spadework: Publishing Archaeology in the late 19th and early 20th centuries, drawing arguments from her recent book, Archaeologists in Print (2018). She showcased the laborious but rewarding archival work necessary to uncover voices which were omitted from the archaeological discourse during this time. Focusing on the work of female archaeologists, she pointed out the various networks of archival institutions and resources within them such as manuscripts, ledger books and guidebooks all of which reveal the extensive depth of archaeological work that female archaeologists were involved in during this time. Dr Thornton’s talk provoked critical re-examination about how investigating these sources reveal a greater understanding of the popularisation of archaeology in print and how performing this archival work brings to surface important narratives which are often obscured from the history of archaeology.