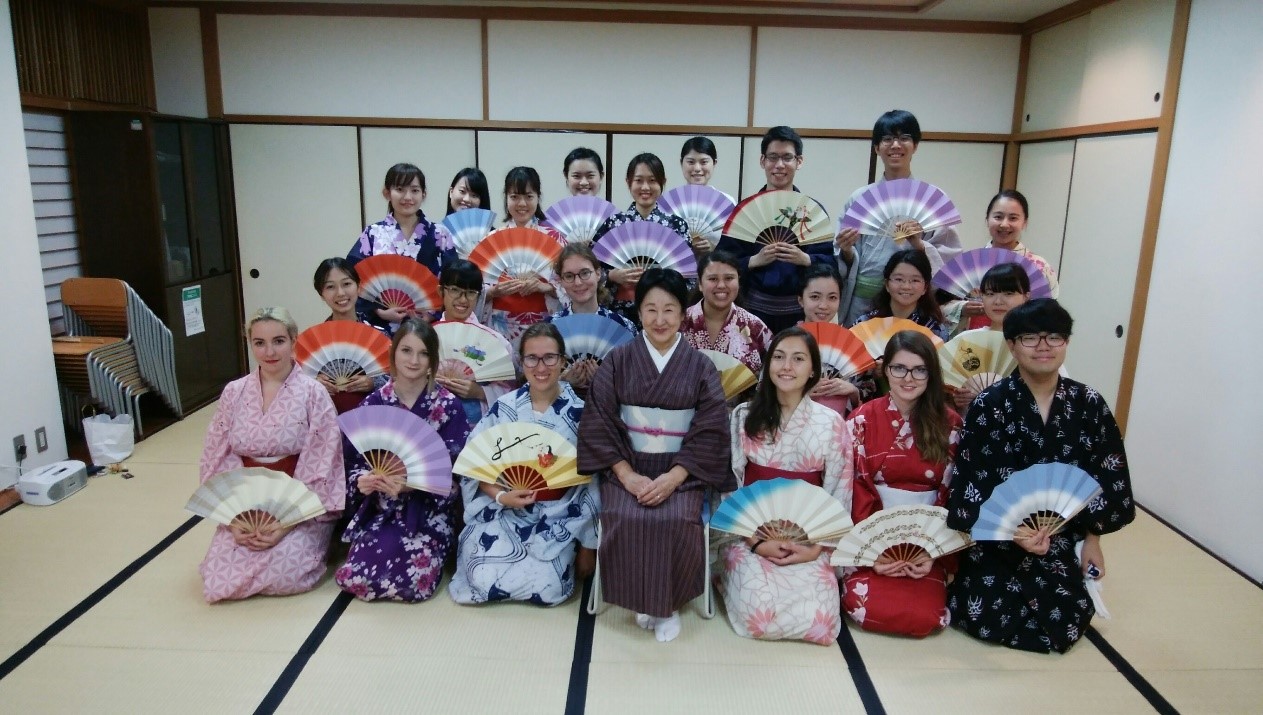 With around 200 000 festivals each year, including 33 festivals now belonging to UNESCO World Heritage, Japanese festivals have become a national and worldwide institution. And yet, they are said to be struggling and progressively disappearing because of a growing disinterest from the younger generation, according to a study produced by The Japan Times in January 2018.

‘During my childhood, I used to join Japanese traditional dance, what we call bonodori, every year […] The dance usually repeats simple and short choreography so everyone can learn it and dance with local people’ Marie Watanabe, a 21 years old student from Keio University explains, when I ask her if she had ever taken part in a matsuri, a Japanese traditional festival. Taking part in a festival seems to be a milestone of everyone’s education in Japan. To the question why festivals are still important nowadays, Marie answers without hesitation: ‘Because they give us a chance to share the happiness with others.’ Telling me this, Marie is telling a wider story, that of Japan itself, which has been written and rewritten every year through the perpetuation of festivals.

That is the reason why I have decided to investigate. My research led me to discover Japanese eclectic tastes for festivals: from Omiya to Kawagoe, to the Sports and Culture day, to the vegan festival and the Indonesian festival, there are festivals for everyone, and if you miss a festival once, you will find out there are plenty of other opportunities as festivals are taking place every week. And what came as a surprise is that the younger generations do generation care and enjoys sharing the ‘happiness’ Marie emphasized in her statement above, with other young people, but also with the elderly. This is what I discovered as I melted into this intergenerational crowd at Omiya festival.

‘This is the expression of myself’, says Fumiko Takada, a professional taiko player, a traditional drum, at Omiya festival. Fumiko has been playing for thirty-three years with the Japanese Taiko Association, and became quiet as soon as I asked for her age. ‘You’ll have to guess yourself’.

And yet, I cannot guess: playing the taiko seems to be her secret to look so young despite being the oldest of the group, one of her fellow taiko players gently teases her. Fumiko believes the presence of the younger generation in festivals is the condition for the future of Japanese traditions. ‘Because the young generation speaks English, they will communicate with you and explain to foreigners why it’s so important for us, these festivals.’ However, Fumiko is the only one who can speak English there, that is the reason why she agreed to answer my questions. Fumiko won’t tell me more about herself, her taiko will express the rest for her as she resumes playing frenetically. What she told me highlights the contrast these festivals draw with Japanese modern society: in a society where introspection and silence are the rule, attending festivals appears as a way to relax, express your creativity and be yourself. 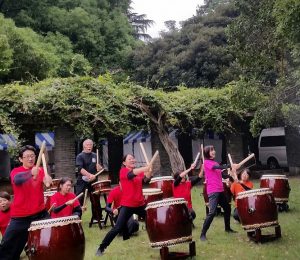 Fumiko’s aspirations to see more young Japanese in festivals is confirmed at the next stall, where I meet with Yoshida Yuta, 25, and Ryota Yamagishi, 23. The two friends came from Okewaga, in Saitama prefecture, to Omiya festival to help their former primary school teachers to organize an event to collect money for the school. Ryota explains to me why the young generation should get more involved in festivals: ‘You know, the Olympic Games are going to be held in Tokyo next year […] some foreign countries will come, and we, as young people, have to export our Japanese traditional culture to them, it’s important’. So, the young generation knows what is left to be done.

And some start taking part in festivals from a very young: festivals are a practice which is part of your education as a Japanese child. This is what Karin Tanashima, 42, Yurika and Hana Tanashima, her 9- and 7-years old daughters, show me. ‘We dance every year in Kawagoe with my daughters, since they are 3’. Pointing at Yurika: ‘She wanted to try on my kimono, so I let her, and now she is there with me.’ Yurika and Hana are standing on the front line of a mikoshi procession, a traditional float, proudly wearing traditional outfits reserved for matsuri. 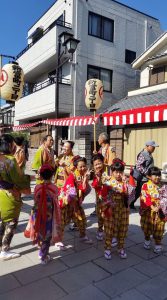 The ‘Japaneseness’ promoted in festivals led me to question their progressive internationalisation: whether it be with the World Heritage classification or with the Olympic Games coming ahead, festivals are becoming an attraction for tourists. And in some of them, you can see even more ‘gaijin’, or foreigners, than native Japanese, what I noticed at the vegan festival for instance, where the majority of the stalls are held by foreigners. I tried to find out what Japanese and foreigners thought of taking part in festivals together. To the question whether foreigners can understand the meaning of festivals, Shogo Hiramatsu, 21, explains that ‘the younger generation like me do not really care about the origin of matsuri. So, I don’t think it’s necessary for foreigners to catch the meaning of it.’

However, on the other hand, foreigners do want to get immersed in Japanese traditions rather than being marginalized because, as foreigners, they supposedly don’t get the meaning. Julia Wright, 21, is rehearsing for the Mita festival. The American exchange student joined Keio nihon-buyo, Japanese traditional dance society, because it enables her ‘to be further embraced in the Keio Japanese community. Nihon-buyo lets me experience a very unique aspect of Japanese culture that I didn’t encounter in the USA, and when learning dances, I also get to learn more about Japanese society.’ In the club, all students, Japanese and foreigners alike, are dressed in yukata, a traditional garment, and learn the same choreography. ‘What about the language?’ I ask Julia. She pauses before pointing at the cloakroom. As I listen, the answer comes straight as I hear Japanese, English, Spanish, German, etc, echoing each other in a cheerful atmosphere, the sort of atmosphere conveyed in festivals. At Omiya festival, Ryota Yamagishi had warned me about the difficulties to integrate foreigners to festivals because of ‘Almost all Japanese people cannot speak English, you may have some trouble there’, but what I found out within the traditional dance club is completely different: English may be the universal language, but here, the universal language used in festivals is called happiness and does not require tremendous efforts, just sharing and respect.

Therefore, the value of festivals can be summarized by a single word: experience. ‘I personally think it doesn’t matter if you don’t know the meaning. You can learn while interacting with local people. What is more important in a matsuri is not to understand but to do it’ says Marie Watanabe. And Marie has a point: the secret of Japanese festivals standing over the test of time may not be so much in the historical background than in the doing and the impact it has on people, regardless where you are from and how old you are. If theory and history are what makes the younger generation reluctant to join festivals because they ‘don’t know the meaning’, it may be time to consider the reasons why those who come still continue to come every year. The answer may be as simple as that: it’s fun and traditional, showing that it may be worth shifting the sacred and traditional meaning of matsuri to emphasize the fun aspect of it. The young generation has already made the first move, so Japanese festivals still have a bright future ahead.