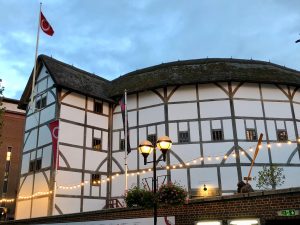 Studying in London was an obvious choice for me because of my academic interest in early modern theater. I wanted a university that would foster my passions, and King’s strong humanities programs made sure that that’s exactly the experience I got.

A module that immediately jumped out to me when I first perused them was Shakespeare’s London, which explored the relationship between Shakespeare’s plays and early modern London. It also had the added bonus of having lectures at the Globe Theater, which was an opportunity I couldn’t pass up. I love looking at the ways that society interacts with literature and how these two elements affect and answer each other. It was a completely different look at Shakespeare than what I was used to back in the US, but I enjoyed that alternate perspective. This class was a unique experience that I could not get anywhere else in the world and I cherished every moment of it. I got to shake the thunder maker in the musician’s balcony of the Globe, touch clothing made by their costumes department, and listen to an expert talk about and play instruments used in early modern theater. It was truly a once in a lifetime experience and I’m so glad that King’s gave me the opportunity to take such an interdisciplinary class.

I also chose to a module in the Department of Political Economy called Elections and Political Communications in Modern Britain. I’ve almost exclusively studied American politics at my home university, so this class was completely out of my comfort zone. I spent an hour after the first lecture googling basic British political terms in a desperate attempt to understand how the UK’s political system worked (my assumption that Parliament was just like Congress was very inaccurate). Even though this module had the biggest learning curve, it was also the class that I got the most out of. It was so helpful to sit down in a small group and hear smart, articulate British students discuss the current political state of the UK. My contributions were from an American perspective and therefore largely about American politics, but I loved the conversations nonetheless. I was only living in the UK for a few months, but these discussions taught me so much about what the country values and how it operates. Although I may not remember the details of every modern British election, our talks about international politics made me privy to information that I can use in my everyday life, and that’s exactly the type of experience I want in a classroom.