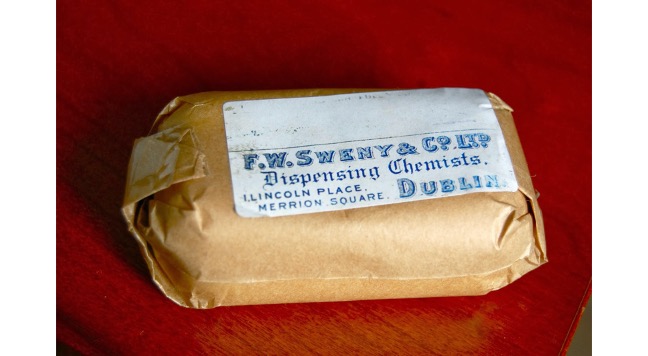 In an effort to mitigate this sensory isolation, I gave a paper at a departmental research hour last term for which, along with the usual PowerPoint presentation and handouts, I provided participants with olfactory slides. The paper was about James Joyce’s Ulysses and odour, and developed out of research I’d done for my book, Novel Sensations (research which ended up on the cutting room floor). My argument in the book concerns the concept of ‘qualia’. In the philosopher Thomas Nagel’s terms qualia are the ‘what is it likeness’ of sensory perception: the particular, irreducible and ontologically subjective qualities of consciousness associated with seeing a colour, or hearing a sound, or smelling a smell. Qualia are endlessly disputed within philosophy of mind. Some philosophers (Joseph Levine; John Searle) believe that qualia account for the ‘hard problem’ of consciousness: the difficulty of reconciling scientific, third person accounts of the functioning of brains with subjective first-person experience. Others (P. M. Hacker) believe they are a misleading concept which obfuscates rather than illuminates the central problems of consciousness. Some (Daniel Dennett) deny they even exist.

As a literary critic I’m not particularly interested in contributing to the qualia debate, but I am interested in the fact that, as a concept, qualia emerged within Anglo-American philosophy around the same time that modernism was revolutionising the arts with a whole host of new aesthetic styles and representational strategies.[1] In my book I try to map the qualia debate onto narratives of modernism’s supposed ‘inward turn’. This is the popular idea that, as Mark Micale has argued,

both psychiatric medicine and the creative arts during the late nineteenth and early twentieth centuries were marked by a massive ‘turn inward’ and a thoroughgoing psychologization of their methods, subjects and intentions. […] Both […] were vitally concerned with the nature and structure of the individual personality, and both pioneered new techniques of narration to capture the inner workings of the human mind and the moment-by-moment experience of individual consciousness. Mark S. Micale, The Mind of Modernism

My thesis in the book is that qualia provide a formidable challenge to the notion of any fundamentally mimetic ‘turn inward’ in literature, and that those critics who use the term to discuss the possibilities of writing consciousness usually commit a simple category error.

This is because one implication of the qualia thesis is that literary descriptions of mental phenomena are always and inevitably partial. If qualia do exist then language itself – whether scientific or literary – will always leave something crucial about sensory consciousness (what it feels like to have it) off the page. No matter how rich and lyrical one’s descriptive facilities are; no matter what new techniques (stream of consciousness, free indirect discourse, narrative fragmentation) one invents, if qualia exist than writing itself is always doomed to be colourless, soundless, and odourless.

What has this got to do with Joyce? Ulysses is a notoriously smelly book. John Sutherland argued that ‘one reason’ it

remained banned for so long in the English-speaking world (and was finally cleared in the US on the bizarre grounds that it was ‘emetic’) was its incidental references to Bloom’s breakfast of grilled mutton kidney, ‘which gave to his palate a fine tang of faintly scented urine’, and his sitting asquat the cuckstool a few minutes later, ‘calm above his own rising smell’. John Sutherland, ‘French Air’ in the London Review of Books (IX, 20, 12 Nov 1987)

Leopold Bloom, one of the novel’s central characters, documents a litany of odours as he walks through Dublin: piss-reeking kidney, oniony bad breath, ‘lobster and mayonnaise’ and ‘[p]otted herrings gone stale’. Joyce was particularly attentive to the new kinds of commodified odour that were in the early twentieth century fundamentally altering what people smelled like, and how they did their smelling: the new perfumes and soaps which developments in olfactory chemistry were making ever more accessible. Modernist attempts to write sensations were often responses to the rise of new mnemonic technologies: machines which seemed to see and hear on our behalf. This isn’t a particularly new argument – critics have long argued that literary modernism was a direct response to the way in which such technologies had reconfigured the human sensorium in the late nineteenth and early twentieth centuries. But while plenty has been written about modernism’s connections with machines like gramophones and cinematographs, far less critical attention has been paid to modernism’s olfactory technologies: to the chemists and perfumers who made as radical a contribution to our understanding of, and relationship with, our own senses as Edison, or Muybridge, did. It’s no accident that Chanel’s No. 5, marketed as the world’s first ‘abstract’ scent, was first released in 1922: the year Ulysses was published. Which is why one Sunday afternoon over the long lockdown summer I found myself spritzing several hundred slips of blotting paper with a variety of different odours – perfumes old and new – which Joyce mentions in Ulysses. I wanted to draw attention to the way in which modernist olfaction underwent transformations – from open sewer to sophisticated late Victorian Plumbing, from mimetic fragrance to designer perfume, from smell as the most ‘honest’ sense, to its use as a form of advertisement – which were just as radical as that associated with other sense modalities. But I also wanted to send my little envelopes of odour out into the world because I hoped that they could connect us in a more intimate way than talking ever can. I think it worked, but my kitchen table smelt of No. 5 for weeks afterward.

[1] Qualia were first defined in relation to philosophy of mind by C. I. Lewis in Mind and the World Order (1929), but the concept emerged directly from debates over the status of ‘sense data’ and ‘sensibilia’ which had been going on within Cambridge philosophy for the previous twenty years. The assumptions underpinning the qualia debate can be traced back to Locke, or to Descartes or, if you prefer, to Plato.