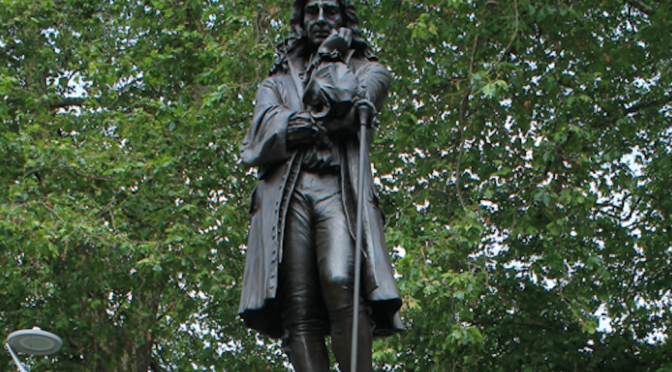 The toppling of the statue of slave trader and MP Edward Colston during a Black Lives Matter demonstration in Bristol on 7th June has led to a predictable wave of outrage at the ‘erasure of history’. But what kinds of history might a statue be said to embody or project? The Colston statue was 125 years old. But it is also an idealised late-Victorian representation of seventeenth-century subject (unveiled 174 years after Colston’s death). What did Colston mean to Bristolians in 1895? Contemporary reports of the statue’s erection in the Bristol Mercury – accessed via the British Library Newspapers database – offer a glimpse of the new monument at its first unveiling.

The citizens of Victorian Bristol didn’t need a statue to remember Colston. His name was inescapable. Many of the charitable schools and almshouses he founded not only survived but flourished into the nineteenth century. Bristol’s impressive Colston Hall, a lavish Byzantine-style concert venue, was opened on the site of one of Colston’s schools in 1867 (the venue announced a plan to change its name in 2017). Every November 13th, Bristolians gathered for ‘Colston Day’, a civic festival of charitable entertainment at which rival Tory and Liberal philanthropic societies competed to raise money for orphans, widows and other worthy causes.

The driving force behind the Colston monument was the local publisher J.W. Arrowsmith. A Bristol phenomenon, Arrowsmith had successfully challenged the London publishers’ domination of the fiction market with a number of spectacular bestsellers, including Jerome K. Jerome’s Three Men in a Boat (1889) and Anthony Hope’s The Prisoner of Zenda (1894). He was also chairman of the Anchor Society, the Liberal branch of the Colston Day charity drive. His plan for a permanent Colston monument in ‘statueless Bristol’ was announced in November 1893. In March 1894, the Bristol Mercury announced that the statue was to be funded by public subscription and to be ‘so placed as to form a companion statue to that of the famous orator and Statesman, Edmund Burke, which is expected to be in place in May or June next’.

Yet in July an anonymous letter to the Mercury complained that ‘response to the appeal has not been by any means as liberal as it should have been’. The Colston Committee eventually organized a handicrafts exhibition to make up the shortfall. Meanwhile, the subscription appeal for the Burke statue was racing ahead. It seems the Irish orator was a more attractive prospect to subscribers, despite his tangential connection to the city. Burke had represented Bristol as MP between 1774–1780, but he rarely visited the city and his opinions were frequently at odds with the city’s powerful merchant class. Now best known for his conservative Reflections on the Revolution in France (1790), Burke was elected MP on a radical ticket. His parliamentary record – including support for Catholic Emancipation, opposition to slavery, and attacks on the rapacious East India Company – made him an unlikely companion for Colston in Bristol’s monumental Centre.

The Irish artist behind the Colston monument, John Cassidy, had trained as a sculptor in Milan before settling in Manchester. Cassidy was something of an expert in sculpting local civic heroes, and his design for the Colston memorial speaks to the vogue for historical novels and fancy dress: ‘Colston is represented attired in the picturesque dress of the period, with flowing wig, coat of velvet, vest of satin and knee breeches. Undue ornamentation in the matter of dress has been avoided … The features denote deep thought’. A bas-relief on the pedestal depicts ‘Colston distributing alms to distressed widows and orphans’.  Allusions to the source of Colston’s munificence were oblique. An assemblage of anchors and dolphins were, according to the Mercury report, ‘symbolical of maritime enterprise, supported by the powers of the sea’. The inscription simply refers to Colston as ‘one of the most / virtuous and wise sons of / their city’.

Critics of campaigns to remove monuments to slave owners and imperialists, have been quick to protest the sanitising of history in the service of ‘political correctness’ or ‘wokeness’. But the Victorians were also touchy about monuments and frequently recoiled from the bloody realities of history. Even the most ardent supporters of British imperial expansion generally justified empire as philanthropic endeavour. In Africa, for example, supporters of imperial annexation argued that Britain had a duty to suppress the Arab and Portuguese slave trades. For many Victorians, empire was a righteous sequel to the abolition of Atlantic slavery. If Colston was to be monumentalised as a local imperial hero, his hagiographers had to be attentive to the political sensitivities of the day. In the unveiling speech, Bristol’s mayor, W. Howell Davies, concentrated on Colston’s philanthropic legacy. But he also claimed Colston as a heroic representative of Bristol’s maritime past.

“Bristol is very rich in historical memories. We have had many great and illustrious citizens who have helped to build up her renown and her commerce, and yet at the same time our city is strangely destitute of some permanent mementos of these men who figured so much in our past history … The trade of our city was second only to London, and the ships of our city went everywhere in the known world. Such was the commercial character of Bristol at the time when Colston became a regular merchant of the city. His business was mainly with the West Indies, and it may be interesting to many to know that his residence in the city was so near to the statue…”

Davies’s speech is consistent with the buccaneering image of the Britannia ruling the waves expounded in the historical novels of Frederic Marryat and Charles Kingsley. Heroic early modern naval exploits offered an imperial exemplar – and a mild rebuke – to the landlubbing youth of the modern industrial city. The opportunities of empire seem to offer the prospect of making Bristol great again. Warming to his theme, Davies almost gets into hot water (‘His business was mainly with the West Indies’) – though he quickly swerves back to the immediate local context (‘his residence in the city was so near to the statue’). On a long day of pageantry and pomp, this is as close as we get to an acknowledgment of Colston’s involvement in the slave trade. The unveiling was followed by a sermon from the Bishop of Gloucester, Charles Ellicott. A conservative theologian and erstwhile Professor of New Testament exegesis at King’s College London, Ellicott implored the citizens of Bristol to see ‘in that statue, and in their cultivation of the memory of Colston, the recognition of two principles, namely, business and benevolence’. History erased.

A year prior to the unveiling of the Colston statue, the Liberal Prime Minister, Lord Roseberry performed the honours for Bristol’s Burke monument. Referring to Burke’s fall from favour with the electors of Bristol in his own lifetime, Roseberry suggested that contemporary reputations ‘are the shadows upon the canvas’, while ‘the reputation of a man like Burke, which is honoured a century after his death, is what is real and what is enduring’. It would be harsh to universally condemn the desire of communities to mythologise and occasionally sanitise their civic heroes. Yet the relevance of such shared monumental histories, as Roseberry implied, relies on continued consensus. The scheme to fund and erect a monument to Edward Colston as an imperial civic hero involved the deliberate erasure of the history of slavery. The activists who hauled the statue down – as exhaustive media coverage has shown – have brought this history to light for a remarkably wide audience. At the time of writing, 36,000 people have signed a petition to replace Colston with a monument to the activist Paul Stephenson, organiser of the Bristol Bus Boycott in 1963. History resumes.