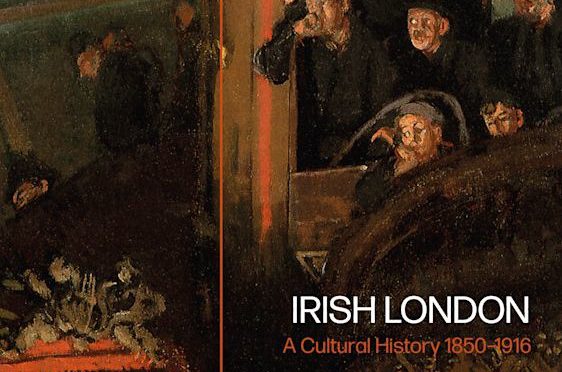 Written by Professor of Irish Literature & Cultural Theory Richard Kirkland, Irish London: A Cultural History 1850-1916 was published by Bloomsbury in September 2021, and has a paperback release forthcoming in 2022.

I’ve always written about Irish culture – it’s been my life really – and in the area of Camden where I live the history of Irish London is inescapable and compelling. So I hoped the book would be a way of connecting my research interests with my day-to-day experience and the friends I have here. I’ve also thought a good deal about London itself over the years, partly because it is such a strong research and teaching area in the English department. In fact, so many of the events I describe in the book happened within a few hundred yards of what is now the Virginia Woolf Building!

What were your aims with this book?

My aim was to try to tell a story about Irish experience in London that hadn’t been told before, one that could account for the diversity of Irish experience in the city while still tracing the enduring connecting threads. This story extends from the mass immigration caused by the historical catastrophe of the mid-nineteenth century famines, through the establishment of numerous Irish enclaves across the city, to the period of the cultural revival in Irish literature and art and the assertiveness of the Home Rule movement, and on to the emergence of militant Irish Republicanism. Alongside this, the book explores the dialogues between such phenomena as Irish and Cockney performers in the music halls, Irish trade fairs, temperance marches, the Fenian Dynamite war of the 1880s, St Patrick’s Day events, and the energetic cultural agitation of Revivalists such as W.B. Yeats and Katharine Tynan.

What’s your favourite chapter and the book’s most memorable or funniest quote?

One of the book’s emblematic figures is the music hall singer Bessie Bellwood. Born in 1857 into a family originally from Cork and raised in Bermondsey, she began her career as the self-styled ‘guileless daughter of Erin’ singing Irish ballads at venues such as the Jolly Tanners in Southwark before remaking herself as a Cockney comedienne. Indeed, she was one of the first to codify the idea of ‘cockney performance’, paving the way for singers such as Marie Lloyd. In the context of the book’s narrative, Bellwood is an important transitional figure within Irish-London culture, negotiating the limits of one identity formation, and creating from the residues of Irish sentimentality about exile a new form of mass popular culture. She was also a formidable presence; her obituary in the Daily News praised her ability to deal with hecklers, noting that ‘she could rout such “Johnnies” as she called them, with great slaughter’.

Were there any challenges writing this book?

With Irish London I was very conscious that I was moving quite deliberately from literary studies into the field of cultural history. This is a boundary that — in Irish Studies at least — continues to have its diligent gatekeepers, so one must tread carefully! Is it a continuation of other research you have done? Does it expand ideas from a previous book?

As I have mentioned, I have always written about Irish matters, although I have ranged widely across subjects and genres within that. My previous book, Cathal O’Byrne and the Northern Revival in Ireland, 1890-1960, was concerned with roughly the same period as Irish London but its focus was on the North of Ireland and the aftermath of partition. Many of the key individuals from that earlier book, such as Roger Casement and Alice Stopford Green, reappear in Irish London; it was quite fun seeing what they got up to in the British capital – especially when they thought no one was watching.

Was any of the work for this presented at conferences or published in journals?

I disseminated some of the research here and there in seminars and journals and (frankly) to greater or lesser effect. I knew the material in itself was strong, but it took me some time to make sense of how it would fit together. I was also Head of the English Department for four years during this time, which was great in many ways although it wasn’t really conducive to the process of formulating the overall shape of a monograph. Looking back, the advice I received from an old friend Colin Graham after a seminar I delivered at Maynooth proved to be the catalyst in putting it all together. I could then see my way.

What are you working on next?

I think I have to continue with this really!  It has been pointed out that, in many ways, the book’s end date of 1916 is also the moment when things were getting particularly interesting for the London Irish, with the fallout from the Easter Rising and the subsequent War of Independence. So a sequel would be great, although, at this point, embarking on another project of this scale feels very daunting…

Richard’s research is focused on the literature, culture, and politics of Ireland in the modern period of contemporary Northern Ireland, during the Irish Literary Revival of the early twentieth century, and in the context of the Irish in London. He has written four monographs and co-edited two collections of essays grouped around these areas. He can be found on Twitter @richardnw5.