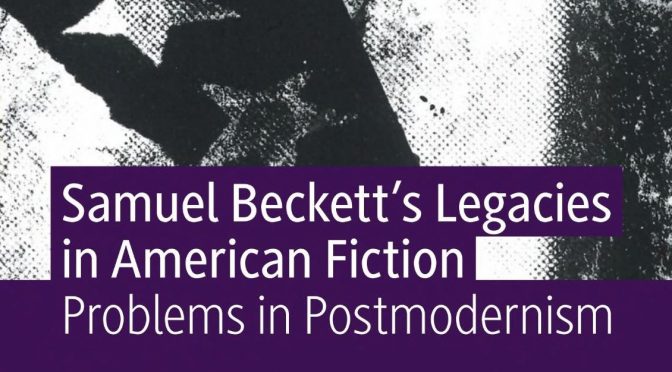 What were your aims with this book?

Beckett would only travel to the United States once—to oversee Buster Keaton in the haphazard production of 1964’s Film—and so it seemed important to convey the unique distance between Beckett and his American contexts (by comparison with his more hands-on approach in Europe). For this reason, I made the decision to foreground Beckett’s American publisher Barney Rosset of Grove Press and the in-house magazine Evergreen Review—the latter serving as a kind of loose foundation for Beckett’s deracination into the postmodern melange. Beginning life as a late modernist review before shifting into a mass-market glossy in the mid-sixties, Evergreen would regularly publish Beckett alongside authors like William Burroughs, Allen Ginsberg, Susan Sontag, Robert Coover and Kathy Acker. Above all, I wanted to tell this story in a way that puts the literature itself in the foreground as much as possible, while hopefully retaining a bit of the madcap energy of the period.

Chapter 2, which covers the full history of Beckett appearances in Evergreen, is the best (and unrelatedly the longest!) chapter of the book. However, I’m also very fond of Chapter 3 on Beckett and the metafiction of Barthelme and Coover which was definitely the most fun to put together, and sees Beckett’s hobbling protagonist re-emerge as a kind of stand-up comedian, an ‘idle student.’

Were there any challenges writing this book?

A lot of the writing for the book took place during the first Covid-19 lockdown when myself and my partner were living out of a converted shed in New Cross. While this sounds like the set up for a Beckett short, it definitely created difficulties. As an independent researcher, it can also be difficult finding headspace and time to balance academics with obligations to work/staying financially solvent. Space and money: in a nutshell. Is it a continuation of other research you have done?

The book began life as a PhD thesis conducted at the University of Reading: home to the Beckett Collection and the Samuel Beckett Research Centre. While it is not an archive-focused project per se, it was definitely impacted by easy access to back issues of Evergreen Review and available holdings on Beckett’s relationship with Barney Rosset.

Was any of the work for this presented at conferences or published in journals?

A version of Chapter 3 was published in Textual Practice—the writing of which was a major consolidatory moment that helped to knock this project into shape at PhD stage. A small section of Chapter 2 was published in the volume Pop Beckett: Intersections with Popular Culture edited by Paul Stewart and David Pattie, and I’ve a forthcoming article on Beckett and American magazine publishing which is due to appear in the forthcoming issue of Samuel Beckett Today on ‘Beckett and Gender.’

What are you working on next?

I’m putting Beckett to one side for the time being and turning to the role of mass-market publishing and ‘big little’ magazines as major channels of mass-modernism in America. My research into Evergreen has been a big factor here, and an entry-point into considering the successes and failures of other publications like New American Review (1967-1977) which explicitly set out to bridge the worlds of ‘quality’ writing with the social concerns of the late counterculture. I’ll be presenting on New American Review and mass-modernism as part of the ‘Unlikely Legacies, Problems in Periodisation’ panel at the forthcoming BAAS Annual Conference 2022, alongside two KCL PGRs: Samantha Seto and George Kowalik.

Dr James Baxter holds a PhD in English Literature from the University of Reading, studying the legacies of Samuel Beckett in postmodern American fiction. His current research concerns mass-market modernism in post-war American magazine culture. As well as Samuel Beckett’s Legacies in American Fiction: Problems in Postmodernism, he has been published in journals such as Textual Practice and Samuel Beckett Today. He can be found on Twitter @chromakeydream.