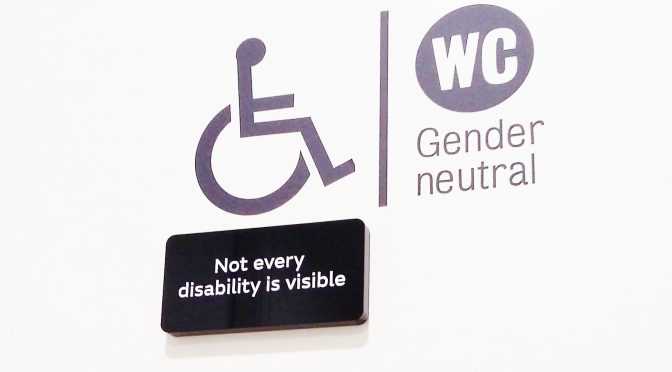 Disability+Intersectionality is a fortnightly reading group based at King’s College London where members meet to discuss key texts in critical disability studies, situating them within the broader context of the humanities and social sciences. Each session will focus on a theme and explore how disability intersects with categories such as gender, race, sexuality, and class.

Christina Lee is a second-year PhD student in the Department of English and a co-organiser of Disability+Intersectionality. In this post she reflects on lessons from the reading group and what intersectionality means to her.

I am terrified of intersections. There is something about the open space in the middle that petrifies me. Once, while I was trying to cross the road, a car suddenly turned right and the driving instructor – sitting next to the learner in the passenger seat – stuck his head out of the window to rail at me for being on the road. I was actually on the pavement a few seconds before and left to cross to the right. I did not go on the pavement because it was too narrow and had poorly cut curbs. He didn’t want to listen and continued to insist I should be on the pavement. Eventually they drove off, though not before he proclaimed that I ought to be run over by a car. This is what I used to think of when I hear ‘disability’ and ‘intersection’.

Pavements, sidewalks, footpaths, are designed for pedestrians, people who use their feet and walk with an easy, steady stride without canes, crutches or prosthetics.

For the session on ‘Disability + Culture’, we watched Judith Butler’s Examined Life. In the film, Butler takes a walk around San Francisco with Sunuara Taylor to ask ‘what can a body do?’ and what that question means for the two of them – Taylor, a person living with arthrogryposis who uses an electric wheelchair, and Butler, a gender non-conforming lesbian – to walk around the city.

As they walk, Judith Butler tells the story of an eighteen-year old young man who liked to walk with a certain feminine sway in his hips. On his way to school, he was pushed off a bridge and murdered by a few classmates who didn’t like the way he walked. For Butler, this story showed her how walking, a seemingly harmless activity, can inspire violence and the desire to kill. In response, Taylor comments that when she was still able to walk, people would mock her and joke that she ‘walked like a monkey’. Bodies have meaning. How people dress, how they use their hips, their feet (or not), say something about who or what they are, and how other people react to them.

Pavements, sidewalks, footpaths, are designed for pedestrians: people who use their feet and walk with an easy, steady stride without canes, crutches or prosthetics. Walking ‘like a girl’, walking in a ‘funny’ way, or not walking at all, are all ‘wrong’ ways of moving. Robert McRuer describes this demand to act normal as ‘compulsory ablebodiedness’, the expectation that every human being must have (or desire to have) legs and feet that enable them to walk, run, and squat.

When a disabled person applies for Personal Independence Payment (PIP), Employment Support Allowance (ESA) or Universal Credit (UC), they are asked to attend an assessment where a ‘health professional’ decides whether the person has limited capability for work and is eligible for the benefits. One of the key questions the claimant is asked is if they are able to mobilise ‘unaided by another person with or without a walking stick, manual wheelchair or other aid if such aid is normally or could reasonably be, worn or used’, and if they are able to ‘walk 50 metres on ground level without stopping and without causing significant discomfort or exhaustion’. At these assessments, the person is often advised to perform disability – so that they look disabled enough to the non-medically trained assessor and get the support they actually need.

A person with mobility-related disabilities, particularly if the person uses a mobility aid, is much more likely to receive benefits than those with chronic illnesses, non-visible illnesses, or mental illnesses.

As Lennard Davis argues, disability is not an old woman with a cane, but the fact of the matter remains that normative assumptions about disability are still firmly rooted in physical impairment. A person with mobility-related disabilities, particularly if the person uses a mobility aid, is much more likely to receive benefits than those with chronic illnesses, non-visible illnesses, or mental illnesses. As we learned during ‘Disability + Borders’, women with chronic illnesses like ME/CFS are less likely to be taken seriously by doctors because it’s not a ‘real’ illness; they are also less likely to be prescribed analgesics than men because women supposedly exaggerate pain more.

Taylor mentions in Examined Life that she moved to San Francisco because it is one of the most accessible cities in the world, which means that she can go into coffee shops and other public places by herself. Yet while she can physically access the coffee shop, she still requires assistance in carrying the coffee to her table. Although she can carry the coffee cup independently using her mouth, she often chooses not to because this attracts attention and causes embarrassment.

The social model of disability argues that making public spaces physically accessible means more disabled people will be out and about, and nondisabled people will get used to seeing and interacting with disabled people. But as Garland-Thomson writes in Staring: How We Look (2009), ‘An encounter between a starer and a staree sets in motion an interpersonal relationship, however momentary, that has consequences’. Looking implies passing a judgement; you don’t always like what you see. Transphobic, homophobic, and disability hate crimes are all consequences of ‘bad looks’.

The intersection is a space for hesitations, decisions, clashes, and redirections.

When you are disabled, looking both ways before you cross isn’t enough. To be a disabled woman of colour is to be stuck in the middle of the intersection, with cars called “Sexism” from the right, “Racism” on the left, and “Ableism” coming at you head on. I am still afraid of busy intersections, but over the past few months, I’ve also come to see them as spaces with potential for resistance. The intersection is a space for hesitations, decisions, clashes, and redirections. Being in the middle gives me a vantage point for seeing where the cars are coming from and who they are heading towards. I see the bigger picture of oppression as part of a system created by capitalism and neoliberalism. All forms of oppression are interrelated and seeing this gives new meaning to the intersection. The intersection is not an island. It is where advocates and allies come together to cause disruption.

‘Human Curiosity has a Revolutionary Power: An Interview with Paul Gilroy’