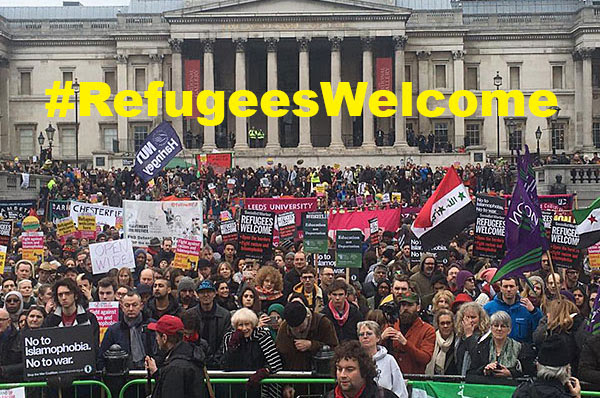 by Penny Newell, PhD student in the English Department

A political demo is nothing without people. But what is it without poems?

On a Saturday in March 2016, over 20,000 people marched through London in solidarity with refugees who are forced to flee from their homes. The event was the yearly Stand Up To Racism national march, with the continuing aim of speaking out against racism.

We stood gathered on the smoothed flagstones of Trafalgar Square, cold, fidgety, absorbing words that confirm the great injustices of the world, eating fig rolls and sipping tea… as is the way with these things.

I wondered if anyone else was remembering the times they’d stood here before: Anti-Austerity. SlutWalk. Pride. The passage through, on the way to hear Jeremy Corbyn’s speech, when my friend turned to me and said ‘I’ve got goosebumps…’

Electricity. Static. Gravity. Grace. ‘Goosebumps’ certainly go some way to explaining the unfounded jolt of vitality that mysteriously holds a clutch of people together on the flagstones of Trafalgar Square.

But at Stand Up For Racism, that clutch took the form of a poem. It was poetry that held us together.

To begin, Sally Hunt, General Secretary of UCU, read Warsan Shire’s ‘Home’. Shire is a Somali-British poet, who has been speaking out for refugees alongside the likes of JJB Bola, Yovanka Perdigao, Yomi Sode and Deanna Rodger.  Shire’s poem confronts the notion of voluntary exile. To seek ‘refuge’ is to leave a home that is no longer a home:

When Sally Hunt read this poem, it changed the tone of the anti-racism march. In Shire’s poem, ‘no one’ and ‘home’ set up a rhythm. She turns the refugee ‘crisis’ into a poetic patterning. As this rhythm picks up, Shire’s poem buzzes with the gravity of its own statement.

It builds, yet it remains static.
It proceeds, yet it returns.
Read it out loud as many times as you like, the poem remains the same.
The world is static to the poem, and the poem still before it.
And there they are: the goosebumps.

Shortly afterwards, Julie Ward, poet and MEP who beat BNP Nick Griffin to the North West seat in 2014, took to the stand. Ward openly mixes politics and poetry. Her MEP homepage blurb opens with an excerpt from James Russell Lowell’s ‘The Present Crisis’.

Then Michael Rosen, former Children’s Laureate, read a poem he wrote on his way to the demo. It too uses a rhythm of breath-work:

Listening to this poem in Trafalgar Square, we tried to follow the variants of each couplet.

Bombs. Drones. Bullets. War. Money. Billions…
But eventually, all we hear is a bolt of electricity running through the static construct: ‘Our governments migrate… but they don’t call that migration’.
The poem is painfully simple and ingloriously graceless.
And there they are again: the goosebumps.

What is poetry doing in these nooks and crannies of politics?

A handful of writers are trying to understand how and why poems are making themselves known at political demos. Franco ‘Bifo’ Berardi thinks poetry can bring an uprising. For poets Danny Hayward and Jennifer Moxley poetry is invaluable, because, literally, it contributes nothing. Poetry defies capitalism.

There are obvious counterpoints to this idea. Austerity Measures: The New Greek Poetry has just been published by Penguin. It contains translated modern Greek poems that deal with austerity in Greece. But it’s retailing at £10.99… On a more sour note, in January Donald Trump used a poem about snakes to dehumanise refugees.

But Austerity Measures, Shire, Rosen and Ward, are signs that poetry is engaging the literary world in the political world. As the editor Karen Van Dyck notes, Greek poetry has become abundant in an age of austerity: find it on walls, at demos, at slam events, and even in empty car parks.

The many pockets do not have a common political programme as such… their heterogeneity may be a promise. What they have in common is their defence of the redundant, the next-to-be-eliminated, and their belief that the Fourth World War is a crime against humanity.

There’s a question that insists upon itself, as it has done before. King’s academics Jo McDonagh, Rowan Boyson, Sejal Sutaria, Paul Gilroy and Pat Palmer, amongst others, recently asked: ‘How might the humanities contribute to an understanding of the current refugee ‘crisis’?’

Poets and poems are responding to this question. This response is unfolding through the poem. Through the sheer nothingness, or what Audre Lorde called ‘the farthest horizon of our hopes and fears… cobbled by our poems’.

‘What can the humanities do?’ we ask.
‘Look what poetry is already doing!’ the poet responds.

And here we are again, in Trafalgar Square. And there they are again: the goosebumps.