One of the most endearing and interesting experiences at uni is being part of a student-run society. These societies are of the students, by the students and for the students – making them rich with different kinds of experiences and a great place to meet new people.

One of the biggest challenges I faced when I moved to the UK was adjusting to life away from home. Apart from being away from friends and family, I missed the hustle and buzz of celebrations during festivals. As the month of November arrived, I could experience this more than ever as it was time for Diwali – the Festival of Lights. Three KCL societies helped me solve this problem.

KCL India Society had arranged a lovely Diwali boat party. Seeing everybody decked up in their traditional clothing and jewellery made me feel like I truly belonged! In addition to this, the society had arranged for a DJ to play some of the best Bollywood tracks, including classics which most of us have been listening for our entire lives. Finding someone you can resonate with so far from home with the beautiful backdrop of the River Thames is truly a fulfilling experience. They also have an event for Holi – the festival of colours – later this year, which I’m definitely looking forward to! 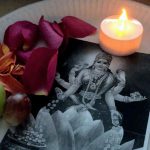 One of the most important parts of our festivals is the Pooja – a prayer ceremony which involves chanting mantras and offering flowers and food called Prasad to God. This was also arranged at Guy’s campus by KCL Hindu Society. It was called the Laxmi Pooja, everybody was provided with a picture of Goddess Laxmi, an electronic diya, and flowers and fruit to offer. One of the committee members from the society conducted the Pooja with the main idol and chanted the mantras, everybody else had to simply follow! The Hindu society arranges several similar events including informative and myth-busting sessions about Hindu dharma, practices and beliefs.

Last but not the least, I was lucky enough to be part of KCL Charity Diwali Show this year. This society puts up an annual show with several different acts to raise money for charity. This is in keeping with the spirit of compassion which we uphold during Diwali and it was a lot of fun working with other students during rehearsals. The concept of social responsibility is highlighted through this show and it reinforces the fact that one of the key parts of celebrating any festival is giving back!

Apart from this, there are several other societies which I’ve had great experiences with. There are over 100 societies under the KCLSU, it’s all about finding what suits you best and getting involved!