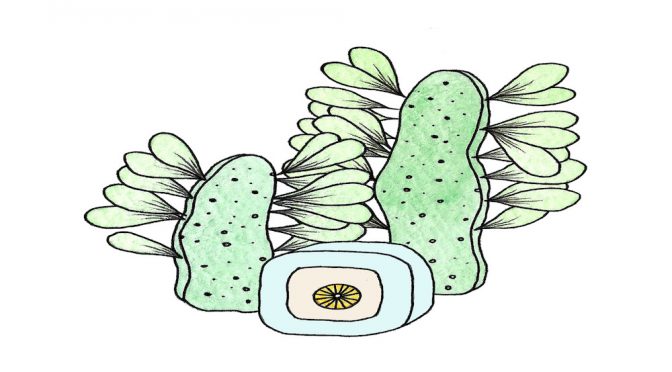 A short story and illustration by Lee Jia-An

“This story is influenced by my reading of Borges, whose works I’ve been researching for my dissertation. I’m interested in the idea of mirrors and repetition in Borges’s short stories and how repetition is indicative of the Eternal Return. This short story is about repetition and how the secrets that we keep hidden from the gaze and the mirror are still echoes of each other. One day, we’ll have to bury them and leave them behind.” I was waiting that day, as I usually did on Wednesday evenings, for bus 198 at the bus stop when I caught sight of the florist running towards me with a safe cradled in his arms. The florist, who was occupying the apartment above mine during those times, had the habit of collecting dried flower petals and of storing them carefully into tiny safe boxes.

“Take this with you.” The florist said, holding the safe out to me. “I know the bus is taking you to the lake now.”

I looked at the safe in his arms and took it from him. “What did you hide in here?” From the way that he’d given me the box, I knew it wouldn’t be filled with dried flower petals. This was a different safe.

The florist paused and looked behind him. We were the only ones waiting by the bus stop at this hour.  “I need you to take it to the lake.” He whispered, refusing to answer my question. Evasion was one of the florist’s many bad habits that I’ve grown accustomed to.

Bus 198 arrived then and I boarded it wordlessly, the safe now cradled in my arms. I took a seat by the window and looked out at the florist who was standing by the pavement, sending me waves of goodbye. It should be made known that the residents of our apartment building have always been hoarders full of secrets. This was something we all knew instinctively, something we never had to discuss with each other. We were all hiding something within the four walls of our respective apartments and the secrets duplicated itself from one apartment to the other and to the other before it. It was a system established long before I moved in, a system that each resident of the apartment building respected and adhered to.

When the bus finally pulled to a stop by the lake, I was suddenly left with the strangest impression. It seemed as if the florist’s safe, sitting quietly on my lap, was speaking a silent instruction to me. Maybe this was why he needed me to carry the safe today, I told myself while standing up.

I stopped by the doors of the bus and turned to the driver. I asked him: “How deep do you think it’d be today?”

He stared at me for a moment and then glanced toward the direction of the lake. “Not as deep as it could be.”

“Should I come back when it’s deeper?”

He paused. “Probably shouldn’t. After all, you’ve always known this day would come. And you know what needs to be done, don’t you? You know what you have to do.”

I know what I have to do, I said to myself. There is a hole at the bottom of the lake, the only place where the safe should be buried.

“Its time to go now.” The bus driver said. “If you want to make it back before the moon rise and the last bus home.”

The clock face read 20:13 when I was back outside the apartment building again.

I walked the three flights of stairs up to my empty room, knowing all the while that the apartment above mine would be vacated and put up for rent now. The florist no longer had any reason to stay and I wondered if we’d ever find each other again in this place because you never know where you’d end up tomorrow. You just never know.

I looked up and came face to face with the resident who occupied the apartment across the florist’s. She was carrying a stack of books with her, maybe going somewhere far. I peeked at the cover of the top book: only a date, 17.07.00, was visible and printed across it. “Something is happening.” She said, lowering her voice and tilting her head upwards. I followed her gaze past the third floor landing to the fourth. We stood there, heads tilted up, for a few minutes before she walked past me and down the stairs. After she disappeared out of the building and into the night, I repeated her previous statement to myself.

My footsteps traced our lingering gazes up to the fourth floor. Like the third floor where I live, the fourth floor is a long stretch of corridor with six apartments each on both sides. I looked down the corridor and only then realized that it was completely deserted. The twelve doors were all left wide open, each apartment now unoccupied. I could almost hear it at a distance, the wheel making its slow turn with every passing second. These secrets are no longer stretching and multiplying itself from one apartment to the other because some things were meant to be buried under the sun.

Back in the living room of my apartment, the hands of the clock were pointed to 20:44. I unhooked the clock from the nail where it hung on the living room wall and placed it gently beneath my pillow. The sound of the turning wheel accompanied me to sleep that night. It wouldn’t be long before it was my turn and it wouldn’t be long before a resident of the second floor comes up to find there being twelve doors left wide open in the night.

Lee Jia-An is an MA Contemporary Literature student at King’s College London. Due to her love affair with the written word and books, she believes that it is important to spend time working in gardens to return to the environment what has been taken from them.

When she is by her desk making work, Jia-An is likely to be found weaving dream-tales. She is fascinated by cyclical narratives, the eerie writings of Silvina Ocampo and the way that broken mirrors have of inspiring tales. Dream-tales are important to her because dreams are unpredictable and foreign. She likes the way that we fear what we don’t know and yet let ourselves be tempted by it. The spaces that she paints are as such: uncertain and wary of itself, always just searching for a place to lay its roots. She is currently a member of the Daughters of the Daily Special, an independent grant organization aimed at supporting female artists.