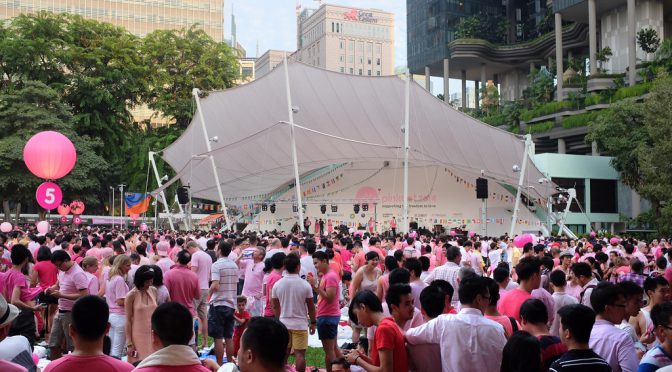 PhD candidate Pavan Mano explores how the seeming reticence of Singapore’s biggest queer movement to openly challenge the status-quo is in fact its key organising strength.

Singapore can be a strange country in many ways. And one of those ways is how it projects an image of a modern, forward-looking metropolis whilst remaining home to a backward (albeit unenforced) law in the form of Section 377A – a legislative hangover from British coloniality – that criminalizes sex between men. Section 377A isn’t an anomaly in the Singaporean landscape – it’s merely the most visible symptom of the primacy of place that heterosexuality retains in the country. Which, amongst other things, means that there’s plenty of work for queer movements to do in terms of advocacy and activism. And one of these movements is Pink Dot.

Pink Dot is easily the biggest queer movement in Singapore. And at the risk of flirting with hyperbole, it’s also the biggest and most successful social movement in the country. Whilst muddling about attempting to conceptualize a PhD project two years ago, I was struck by how effectively this movement managed to enact dissent in an environment that is distinctly averse to configurations of dissent. After I’d picked myself up off the floor, my intrigue persisted.

I was particularly interested in how this queer movement had grown from attracting roughly 2,000 people when it first began in 2009 to drawing more than 25,000 in 2019 in a country where citizens are disinclined to protest.

Since its inception, Pink Dot has styled itself basically as a fun day out with friends – essentially, a very pink picnic. It’s certainly morphed a little bit over the years and become somewhat more pointed in its call for queer rights, but the overall tone it strikes is very much one that emphasizes harmony between all communities and happiness for everyone rather than open dissent at a status quo that marginalizes the queer community. I’ve come to find that this is no accident – when initially planning the event, Pink Dot organizers made the decision not to model it on Pride and wanted a different approach that would stand a better chance of gaining broad public support. I wanted to understand why. Reading Pink Dot in this way – as an exemplar, in other words – means I’ve focused less on sexual politics and exclusion in Singapore and more on the pressures that shape movements and articulations of dissent in Singapore. And in some sense, I mean this quite literally.

One of the defining features of Pink Dot is an aerial photograph of participants forming a literal Pink Dot that’s taken at the end of the event as a visual record of collective solidarity.

But these photographs are not only records of solidarity, they simultaneously reflect the limits of dissent in the country. For, the imperfect dot traced by the mass of pink is also the shape of Speakers’ Corner at Hong Lim Park. Modelled on Speakers’ Corner at Hyde Park – a trace of the colonial orientations that so often continue to animate former colonies – Singapore’s Speakers’ Corner was introduced in 2000. It was gazetted as the only space in Singapore where public speeches could legally be delivered without needing a permit – with the caveat that speakers had to keep clear of topics related to race and religion. Then, in 2008, the government relaxed legislation further and announced that public demonstrations – which, till then, had also required a police permit – would be freely allowed at the Speakers’ Corner. Taken together, this meant that for the first time in independent Singapore’s history – and probably colonial Singapore, given that Britain famously wasn’t a champion of freedom of expression in its colonies – there was a space in Singapore where public assemblies could be held. And this opened new possibilities of collective mobilization and organizing. Even so, protest and dissent were things Singaporeans instinctively shied away from. And not for nothing – it is a wariness borne out of a keen awareness of dissidents who have come before.

In May 1987, the Singaporean government had authorized Operation Spectrum. This was a covert security operation carried out under the Internal Security Act (ISA). State security forces arrested sixteen church workers and social activists, accusing them of using the Catholic Church and other religious organizations as part of a “Marxist conspiracy” to undermine the state. A year later, the ISA would be wielded again – this time on the former Solicitor-General Francis Seow who was representing two of those who had been rounded up in Spectrum. Seow was accused of accepting foreign funds in support of his campaign to become an MP. He was detained without trial for more than two months.

Ordinary citizens deemed to have raised their voices too loudly have been similarly slapped down and very publicly put in their place.

In 1994, the writer Catherine Lim published an op-ed in the national broadsheet about the opening up of what she called a great affective divide; it was essentially a commentary in which she claimed the government was losing touch with its people. It wasn’t a particularly harsh piece but it attracted a disproportionately aggressive response from the government. One minister suggested that anyone with strong political views should join a political party and stand for election. Another commented that her views smacked of intense disrespect. And in Parliament, the Prime Minister Goh Chok Tong remarked in response to Lim that “if you land a blow on our jaw, you must expect a counter-blow to your solar plexus”. Of course, he was speaking metaphorically but it was a weirdly vivid and violent outburst over what was really one person’s fairly bland critique. The fear of being on the end of the state’s wrath played a significant role in determining the contours and limits of the nascent LGBT movement then. And this genealogy helps make sense of Pink Dot today.

Despite its evolution over time, the trace of that old fear continues to manifest. Less so in a fear of openly mobilizing but more in the rhetoric that’s mobilized to expand the space for the queer community in Singapore. The habit of not openly challenging power is a particularly hard one to shake. It’s reflected in Pink Dot’s messaging that performatively neutralizes the discordant elements of its rhetoric while simultaneously using that state of apparent neutrality to draw public support. At first glance, one might say this isn’t the most radical of approaches, and it might well be true, but in a space where the contours of radicality have been exceedingly tightly drawn, perhaps Pink Dot deserves a second glance, and a second reading, as a manifestation of possibility.