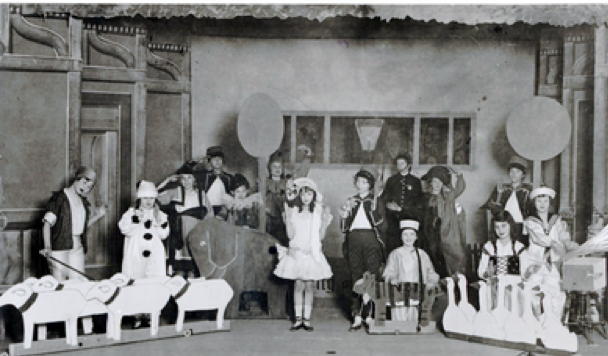 Even as audience members took their seats, the steel voice of David Bowie reverberated round the chapel creating an uncanny collage of distant and futuristic past, scattering echoes about the room.

The performances then began with excerpts from Elena Langer and Emma Jenkins’ Rhondda Rips it Up! sung by Stacey Wheeler and Kate Woolveridge and accompanied by Satoshi Kubo on the piano. The opera, ‘a riotous romp’ through the life of the Newport suffragette, Lady Rhondda, aims to uncover; adding to the popular, Pankhurst-dominated suffragette narrative by unearthing this lesser-known fragment, the work of Lady Rhondda, and magnifying it with vaudeville-style music and a comic libretto.[1]

Then followed performances by pianist Lana Bode and soprano Olivia Boen from the Virginia Woolf and Music Project founded by Emma Sutton and Lana Bode. Harnessing the democratising power of exposing forgotten fragments, they began with Six Chansons Françaisesby Germaine Tailleferre, a composer whose career was impeded by intense misogyny. Bode and Boen also performed extracts from Debussy’s La boîte à joujoux, that was first performed by the Omega Workshops in 1915 as part of a ‘pacifist concert series’ intended to express European solidarity during conflict. The short ballet, written for children, is thus presented in short, digestible episodes, with amusing musical quotes and recognisable themes that can easily be paired with characters. A style intended for children, it also eerily embodies the modernist propensity towards fragmentation. This link perhaps illuminates the aesthetic desires of a generation shattered by conflict and shaken by social and technological change. Surely not unrelated is the contemporary interest in child psychology.

Next was the world premiere of artist Deborah Pearson’s performance of Hope Mirrlees’ influential and famously fragmentary poem Paris. Pearson deftly navigated the poem’s itinerant voice as it dons many different verbal costumes – that of announcer, conspirator, advertisement etc. – in its journey across Paris. As these vocal shards are assembled, we are offered a geographic and historical snapshot of post-war Paris, one that Pearson took care to lay out in a way that was straightforwardly faithful to Mirrlees’ intention, simply projecting parts of the poem so its innovative spatialization was not lost in its temporal recital. This fluent and unfussy combination of spatial and temporal rhythms conveyed the poem to elegant effect.

This was followed by two songs by Amit Chaudhuri, who was accompanied by Oliver Jarvis on the saxophone and Matt Hodges on the piano. They began with Chaudhuri’s ‘One Fine Day’, that employs a North Indian svara, where each note of a scale is named, comparable to English solfa. In this way, the fragments combined are ordered and predefined, but limitless in potential combinations. Patterns of preestablished elements form and repeat like mosaic tiles tessellating and shifting together, so that a new element, a new colour, is introduced to striking effect. Their next piece, ‘Famous Blue Raincoat Suite’, was another patchwork of voices as Chaudhuri arranged the works of Leonard Cohen, Ravi, SD Burman and more. These voices, in chorus with the controlled moan of the plaintive saxophone, the soft song of the piano, and the echoes provided by the cavernous space, created an exciting modernist ensemble.

Finally, Isabella McGuire Mayes performed an extract from Rimsky-Korsakov’s Scheherezade. Making use of the irregular space and dancing down the aisle, McGuire Mayes performed the ‘Ballet Russes’ inspired choreography that challenged expectations; disrupting classical balletic lines, almost like a duet with the shimmering violin solo from the ballet’s second movement. In addition to the ballet being famously a story of stories, a tale made up of pieces, this was the first we had seen of fragments of movement, as McGuire Mayes exquisitely followed the lilt of the violin’s triplets, poised, then veering together from the regular 4/4 rhythm, accelerating and decelerating, only to return to the start.

As I begin work on a dissertation about rhythm in the modernist period, the way in which it was redefined, underwent scientific experimentation, and was adopted by many different disciplines, this revue seemed particularly pertinent.

Beyond the rhythmical developments that occurred within the disciplines themselves, that could be seen in the evening’s performances, such as Chaudhuri’s 5/4 time signature or Mirrlees’ unusual typography mimicked by Pearson slowing her spoken rhythm, the performances each had their own rhythm as they were comprised of fragments collaged together. Beyond even this, the revue made me reflect upon the rhythm of performance itself: the ritualistic practice of meeting to appreciate art, the evening punctuated by applause, silence, and the art itself, a rhythm so familiar as to seem rehearsed.

Thus, I would like to add to the tide of revisionary understandings of the idea of ‘fragmentation’ in modernism and suggest that the direction of this process is important to note. While the term suggests a kind of breaking down, a whole torn asunder, the rhythm of performance implies a joining together, a collage, an attempted unity engendered by sharing in the rhythms of the art itself and the ritualistic gestures involved in performance.

So, I am led to the conclusion, which will prove valuable to my own research, that performance, and perhaps modernist performance in particular, composed as it was of fragments, is an important iteration of aesthetic rhythm that is used in grasping some form of unity, of collective identity. This is a conclusion that vindicates Woolf’s famous words, that ‘Behind the cotton wool is hidden a pattern; that we—I mean all human beings—are connected with this; that the whole world is a work of art; that we are parts of the work of art’.[2]