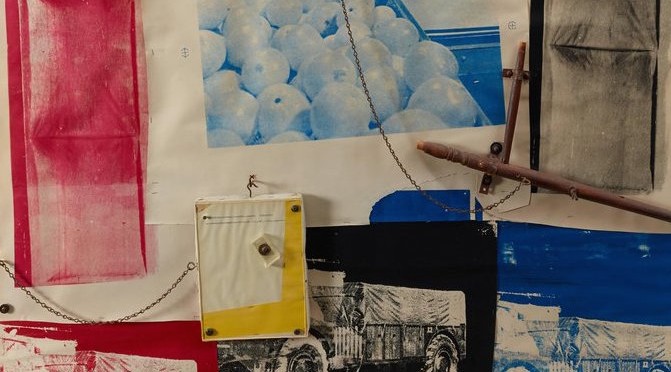 ‘Performance/Museums/Practice’ is a monthly research seminar which considers the overlapping and intersecting practices around performance and museums, in all their complexity and richness. It is an interdisciplinary group, open to academics, practitioners, and those with a general interest in the topics, and seeks to stimulate discussion and debate around these areas of research.

The first session, held at King’s on December 4th 2017, considered ‘Collaborations and the Expansion of Performance’. The seminar usually involves two key texts and one case study which form the basis for the conversation during the seminar. In this first session, we looked at Simon Martin’s ‘Painting the Stage and Screen: Burra and Performance’, Robert S. Mattison’s essay on ‘Sleep for Yvonne Rainer’, and looked at the work by Robert Rauschenberg, ‘Sleep for Yvonne Rainer’, currently in the collection of the Museum of Modern Art, New York.

One of the big areas of discussion which came out of this first session was around ‘spectatorship’, inspired by Simon Martin’s observations of Edward Burra’s focus on drawing and painting audiences at theatrical and musical events, but also by our own responses to the Robert Rauschenberg work ‘Sleep for Yvonne Rainer’, our case study. Linking to Burra’s voyeuristic tendencies, we looked also at his similarities to the works of Edward Hopper, but also the more contemporary works of Yayoi Kusama and Thomas Struth, in the prevalence of photographs of people engaging with art or art spaces in their works. This led to a very interesting discussion around the problems and possibilities of engaging with art experiences through social media, and the anxieties and pressures of enjoyment and participation within this.

Our discussions around spectatorship and participation in Rauschenberg’s work also strayed into the territory of documentation and museumification, particularly of historic works with previously interactive or moveable elements. This also led us to consider the prevalence of the term ‘choreograph’ within descriptions of audience interaction with changeable works such as Sleep for Yvonne Rainer, as opposed to ‘curate’ or ‘interact’, an issue that will hopefully continue to be debated throughout the seminar series. The challenges of works entering a period of ‘stasis’ within the museum, as a result of preservation, conservation, and curatorial practice, is something which we are sure will also be a point of consideration in session two, which will look at curating performance and time-based media.

Another strong thread throughout our discussions were around ethics, labour, and capital, particularly linking to body-based artistic activity. This led us to considerations of how participation can challenge our sense, as an audience, of the social contract and demand unexpected labour.

We also took an interesting diversion into looking at the Museum of Modern Art (MoMA’s) recent acquisition of works by choreographer and dancer Simone Forti and their transmission by a trained and experience instructor of the work.

We considered the issue of remuneration for knowledge, rather than for labour, and how this might intersect within the discipline and practices of dance. There was a nice sense of circularity within this, pointing back to an earlier consideration of the arts market’s influence on Burra’s career, in his cross-disciplinary work between theatre and visual arts, where his scenographic work often supported his other artistic activities.

Performance/Museum/Practice is a reading and discussion group founded by Bryony White (King’s College London), Ellie Jones (King’s College London) and Acatia Finbow (University of Exeter). The next seminar will be held in the Virginia Woolf Building at King’s College London, Monday January 15th, from 6.30pm. More details can be found on the Facebook group (https://www.facebook.com/groups/1809478739311127/) or on our website (https://performancemuseumpractice.wordpress.com/) where the readings for each session are also listed in advance. The group is open to everyone, regardless of research interests or expertise, and we hope to see you there!

Reimagining the Witness in the Eternal City