With the move to fully online teaching, it soon became apparent the most advanced KEATS (Moodle) training session, KEATS 3: Personalising the Learning Experience, was not appropriate for synchronous delivery. The session was re-designed as a completely flipped session, but attendees would often miss the pre-work instructions. The use of Microsoft Power Automate was explored to automate instructional emails, but the uses of the tool were further reaching than initially considered. 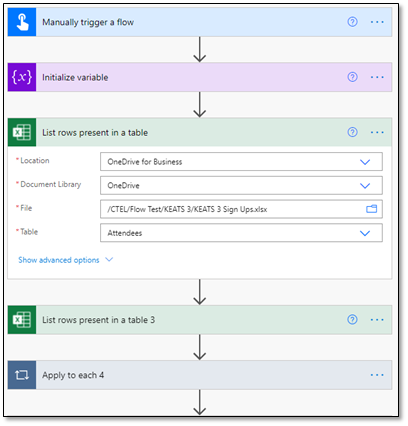 KEATS 3: Personalising the Learning Experience is the most advanced KEATS training session the Centre for Technology Enhanced Learning (CTEL) offers. The workshop covers a range of tools within KEATS for academic staff to offer a personal learning experience for their students. Activities covered in the course include.

These activities are fairly advanced and require a good deal of pre-existing knowledge around KEATS. When lockdown was first announced this session was delivered synchronously online, and it became apparent that attendees were becoming confused with the amount of screen switching that was required. Attendees would have to watch a screen share demonstration via a Microsoft Teams Meeting, test the demo that had just taken place as a student to gain an understanding of a student’s point of view, then navigate to their own editable KEATS page to build the activity. For those using one screen, this was incredibly difficult and frustrating. Those that were more experienced with KEATS would feel frustrated that they had to wait for those that may require more help, and those that were less experienced with KEATS would feel disheartened about holding everyone else up and lost out on building some activities.

I decided to re-design the workshop as a flipped session: Attendees would be granted access to a private editable KEATS page and a PDF guide would be provided for them to follow to build the activities in their own time, a week before the scheduled online meeting. The online component of the session would be used for the cohort to come together and discuss the activities, discuss how they would use the activities in a real-world context, share ideas, ask follow up questions and mitigate any potential problems with the instructor. This format worked well and was praised in the feedback, but only by those that completed the pre-session activities. For those that didn’t, the online component was useless.

I took to emailing the attendees at strategic points to remind them of the pre-session work, but at times this was not always possible due to annual leave and a high workload in other areas, and at times forgetfulness. I had looked into using Power Automate for another project and considered that it could be usefully applied in this context. I quickly realised that I could schedule emails to be sent out at certain points, but an exploration of the rest of the features in Power Automate led me to realise that there was potential to automate the entire process. Working in conjunction with an Excel spreadsheet that contained all necessary contact details and formulas, the Power Automate flow would automatically create and send out the Teams Meeting invite, the reminder emails at designated times, and the closing and feedback request emails at designated times at the push of a button. All that needed to change were the email address and names of the participants, and the date and start time of the session in the Excel spreadsheet. 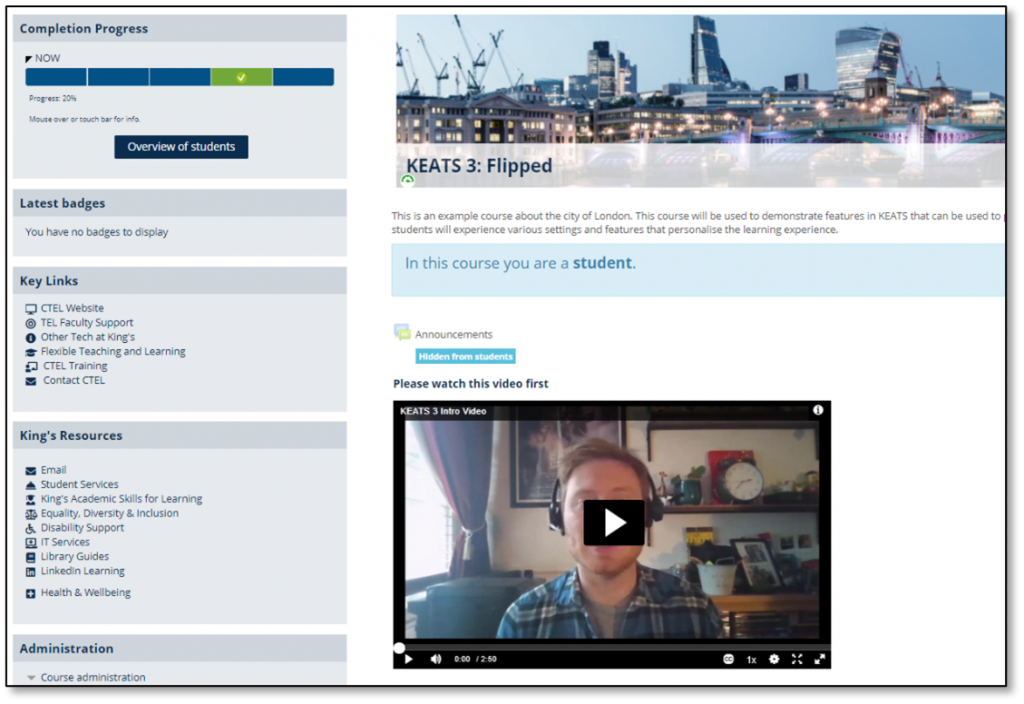 Once testing had been completed with members of the CTEL team, I rolled this out to a KEATS 3 session. I was surprised to see that 100% of the attendees who showed up had completed at least some of the pre-session work, with most completing all of it.  However, although attendees completed the pre-session work it did not mean that they were any more willing to collaborate in the online session and revealed that I need to work on my eliciting technique, ensuring that more people in the session collaborate. At the end of the session, I revealed that the email notifications they had received had been automated and asked if they could include any feedback for this in the form, whether the emails were too many, too few etc. Those that left feedback reported that the number of emails was enough (1 initial email and 1 reminder email) and they welcomed the prompts.

I have used Power Automate a number of times for this session and have discovered that although the email prompts have been useful for reminding attendees about the pre-session work, they have also been handy for those having any issues to get in contact with me regarding access to KEATS areas, or simply letting me know that they can’t attend the online component, helping me manage the session more effectively.

As Power Automate is a Microsoft product, it is fantastic at automating processes within the Microsoft catalogue but anything outside of Microsoft is not available to be brought in to automation. I still need to manually log into the training booking system (Skills Forge) and manually extract the email addresses and names of the attendees, and I also send an announcement via KEATS in the main KEATS 3 area to remind attendees that they need to complete the pre-session work. This multi-pronged approach does work well.

One aspect that needs to be improved from Microsoft’s end is the ability to take into account a response to the initial Teams Meeting invite. If an attendee can no longer attend the training session and declines the initial Teams Meeting invite, they will still receive the reminder emails and the feedback request emails. To be able to stop these emails going to an individual no longer attending the session would be a big benefit.

After a successful rollout of using Power Automate for the KEATS 3 session, CTEL is now exploring automating the entirety of its CPD offerings. KEATS 3 is the potentially the most complicated session to build automation around as it is the only session that is flipped. The belief is that the other sessions CTEL offer will be easier to automate due to the fewer steps they will need in the automation flow. As experience with Power Automate grows, efficiencies will be spotted and acted on. Like any technology, it has its limitations and its advantages and once these are understood the benefits can be fully realised.

The use of Power Automate to support KEATS 3 has been a success due to the feedback received and the amount of engagement before the session. However, contributions from all attendees during the online discursive session could be improved and this is something I need to develop to provide a worthwhile experience to attendees.

Using Power Automate in this way has helped me realise and evaluate potential crossover to other projects. For example, I am exploring using Power Automate for targeted comms in one project, as a booking system for another, and as a way to share relevant feedback information with the relevant parties.

He has a keen interest in the use of artificial intelligence in education.

View all posts by Georgios Aretakis