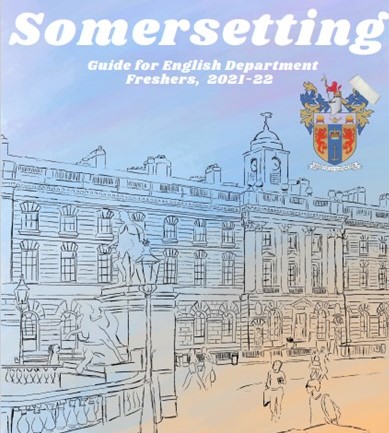 For today, we have an insight into the module ‘Early Modern Literary Culture’, including a chat with Dr Sarah Lewis, the module convenor.

Some of you may be familiar with the term ‘Early Modern’, but don’t worry if you’re not since encounters are key to this exciting and varied module which will introduce you to the world of Early Modern literature! You will revisit familiar works like Romeo and Juliet and extensive works which literary critics have wrestled with for centuries, such as The Faerie Queene and Paradise Lost. If you’re interested in performance and court politics, Ben Jonson’s Court Masques are absolutely something to look forward to!

Although The Faerie Queene and Paradise Lost may seem a little daunting at first, they are both thematically rich texts filled with allusions, magic and betrayal, making them the ideal texts for us, as readers and critics, to unpick ‘Early Modern Literary Culture’ is the type of module where your personal encounter with and exploration of the texts are key. Your lecturers and seminar leaders will provide you with plenty of contextual knowledge, additional readings, and critical concepts you can explore that will enhance your experience of the text. For example, The Fairie Queene is the only book in my entire three years of study that I have experienced in so many different formats: different editions, modern translations and audiobooks have all been a part of my exploration of the world of The Fairie Queene.

‘Early Modern Literary Culture’ highlights the importance of combining how you individually experience the texts, what fascinates and puzzles you, with what literary critics and historians have already written about them. This module was certainly a turning point in my studies – it made me think, engage and write more critically whilst also unravelling a whole world of Early Modern literature before me. If you love ‘Early Modern Literary Culture’ as much as I did, I recommend the following second-year modules: ‘A Mad World, My Masters: Performing Culture in Jacobean England’ and ‘History, Politics & The Elizabethan Imagination’.

To give you more insight into ‘Early Modern Literary Culture’, I had a chat with Dr Sarah Lewis, the module convenor.

Which skills does this module develop the most?

This module challenges students to engage with texts which are unfamiliar, and which, as a result, may seem ‘difficult’. That unfamiliarity takes many forms: you’ll be reading texts by writers you’ve never heard of; examining genres of writing it’s unlikely you’ll have come across before; and exploring early modern ideas and ideologies which, although in many ways familiar, can also be strikingly and sometimes disturbingly different from our own. Learning how to profit, from that unfamiliarity through your own thinking and writing is the key skill you will develop through this module.

How can a student make the most of this module?

I think the most important thing students can do is read the texts! If you can consistently read the materials, and show up to class week on week, you’ll do well!

Do you have any reading recommendations which aren’t studied on the module but resonate with its themes?

Perhaps rather predictably, I would recommend Mantel’s Wolf Hall trilogy. We don’t look at any texts from the period in which the novels are set, but they are still useful for evoking the cultural contexts we will be exploring. They are an obvious choice, perhaps but I think both the form and content of Mantel’s writing (can we separate the two?!) evokes brilliantly the smooth veneer of social decorum and the frantic scrambling for power (in its many forms) which are an ever-present undercurrent. Like early modern writers, we’ll be thinking about this tension between the form of expression – performance / spectacle / decorum – and the underlying and incredibly fraught political negotiations of social status, gender, sexuality, race, nationality etc., which often bubble up through the cracks.

What is your favourite text/theme/part of the module?

I really enjoy introducing students to the Court Masque, which is a particularly niche literary / performance genre.

And finally, a special message from Dr Sarah Lewis to you all:

I’m really looking forward to welcoming you all to the module in January! Do get in touch if you have any questions, or if you just fancy a chat about the literary culture of the sixteenth and seventeenth centuries!

The full magazine can be found here: Somersetting Magazine. Check back tomorrow for more coverage on the department blog!