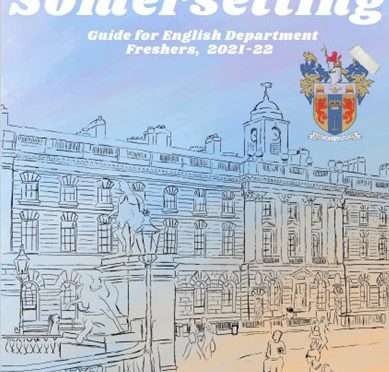 For today, we have an insight into the module ‘Medieval Literary Culture’, including a chat with Dr Joshua Davies, the module convenor.

Whether you love Medieval literature or you find it slightly puzzling, this module provides you with a great introduction to the genre and builds your confidence in working with Middle English.

Before ‘Medieval Literary Culture’, the only Medieval literature I had studied was Chaucer’s The Wife of Bath’s Tale and my view of the Middle Ages was primarily influenced by films and TV shows. Through this module, however, I expanded my understanding of the relationship between the Middle Ages and its depiction in popular fiction and media today. The texts you will study are filled with exciting and familiar stories of magic and adventure, as well as some which you may be less familiar with such as martyrs, medieval comedy and travel writing. Whether you’re acquainted with Medieval literature or not, you’re certainly going to learn plenty and have fun!

My favourite text on this module was Beowulf because it has so much that I enjoy reading about, like heroes, monsters and profound questions about what it means to be a monster. The history surrounding the text, its adaptation and reinterpretation in the 20th and 21st centuries was particularly engaging and learning about them made it easier to understand nuances within the text. The wide variety of texts studied in this module and the in-depth analysis certainly strengthened my confidence in working with Medieval literature.

The most important tip I can give, in fact for all modules, is to not be afraid to ask questions and to book office hours with your lecturers and seminar leaders. Hearing about my seminar leader’s dissertation on Medieval literature made me realise how much there is to study about the importance of how we practically engage with it today, which developed both my critical thinking and made me even more excited to explore Medieval literature. If, like me, you love the Medieval drama and performance on this module, I highly recommend that you also check out the second-year module ‘Performance in Medieval Culture’.

To give you more insight into ‘Medieval Literary Culture’, I had a chat with Dr Joshua Davies, the module convenor.

Which skills does this module develop the most?

This module is all about close reading, but doing close reading in a way that recognises the importance of historical context. This might sound a bit confusing, but this module is also about texts that belong to multiple contexts. That means that we think about the moments in which texts were first composed and circulated, but also the moments at which texts were read, whether that is in the Middle Ages or modernity. One of the things we learn is that the meanings of a text change according to the context in which it is read, and also that texts never belong to only one context, it all makes sense after a few weeks, I promise!

How can a student make the most of this module?

Read! One other really important piece of advice keep an open mind! One of the topics we discuss in the module is popular contemporary perceptions of the medieval period. If you say ‘medieval’ to someone, what kind of image comes to mind? Dragons? Kings, queens and castles? Peasants? Monks? We all approach medieval culture with preconceived ideas that have been shaped by things we have read, watched or played in the past (Tolkien perhaps, or Game of Thrones, or Skyrim). Part of the work we do on this module is about thinking through those preconceived ideas, so it is very important that students try and keep an open mind as they read. There is another question we need to ask as well: why is our contemporary popular culture full of references to the medieval period? What’s that about?

Any reading recommendations which aren’t studied on the module but resonate with its themes?

A text I’ve read recently that resonates in really interesting and surprising ways with our themes is Hazel Carby’s Imperial Intimacies. A Tale of Two Islands. This is an absolutely brilliant and very moving book, and one of the things it is about is the way in which ideas about the past shape our lives in the present. A text with more explicit connections to the work we do on this module is Miller Wolf Oberman’s poetry collection The Unstill Ones, which includes translations from Old English poems (don’t worry if you don’t know what ‘Old English’ is exactly we will teach you!). Another is Paul Strohm’s The Poet’s Tale, which is a very fun and readable biography of Geoffrey Chaucer that gives really valuable insight into what medieval London might have been like.

What is your favourite text/theme/part of the module?

My favourite part of the module is the seminars. I love talking to the students about these strange, wonderful and sometimes slightly annoying (in a good way!) texts. I love the surprising connections students are able to make and the way their ideas develop over the course of the module.

The full magazine can be found here: Somersetting Magazine. Check back tomorrow for more coverage on the department blog!