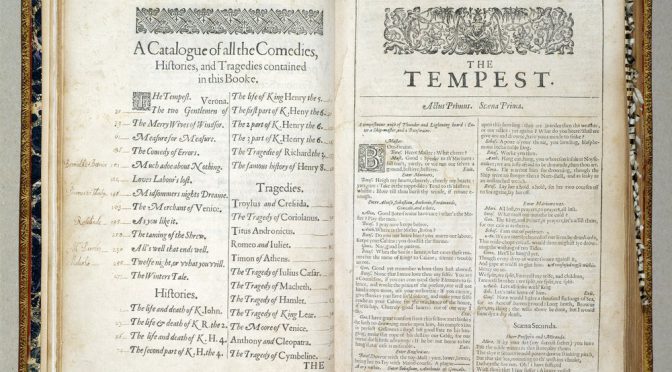 By Kirsten Tambling and Sally Barnden

Dr Kirsten Tambling and Dr Sally Barnden, postdoctoral research associates on the AHRC-funded project ‘Shakespeare in the Royal Collection’, discuss their work and findings ahead of the launch of their online database and exhibition on the 15th of July.

Kirsten: In 2018, Cole Moreton wrote a piece for the ‘i’ on the ‘transformation’ of Prince Harry. Arguing that ‘Prince Harry’s transformation from wild child to hero is uncannily like that of Shakespeare’s warrior Hal’, Moreton traces the trajectory of the Prince of Wales’s second son from tearaway teenager – sent to rehab for smoking cannabis – to one of the royal family’s most popular members, alongside that of Prince Hal of Henry IV Parts 1 and 2.

The article pre-dates the sudden departure of Harry and his wife, the former actress Meghan Markle, from the fully paid-up ranks of ‘the Firm’. However, with the British royal family increasingly a frontier in the modern ‘culture war’, the Shakespeare comparison, evoking at once British national identity and historic tradition, and the more transgressive magic of powder and greasepaint, seems all the more relevant. But, as we have discovered via the AHRC-funded ’Shakespeare in the Royal Collection’ (ShaRC) project, run by KCL in partnership with Birkbeck and the Royal Collection Trust – it is at least as old as the Hanoverian succession.

Sally: The first prince that we know of to be compared to Shakespeare’s Prince Hal was Frederick, Prince of Wales, in a painting dating from the first half of the eighteenth century, and we’ve found instances of the comparison for almost every subsequent Prince of Wales. I think there are a few threads at work here. One is Shakespeare’s long-established status as national poet, which makes his plays obvious reference points for anyone who wants to write about history and monarchy. And another is that the Prince Hal story has been politically very useful to royal figures over the years, because it treats youthful indiscretion as a step on the way to greatness – as Prince Hal himself says in the play

I know you all, and will awhile uphold
The unyoked humour of your idleness:
Yet herein will I imitate the sun,
Who doth permit the base contagious clouds
To smother up his beauty from the world,
That, when he please again to be himself,
Being wanted, he may be more wonder’d at[.]
(Henry IV part 1, 1.2.150-56)

So, if you’re a prince who wants to spend some time indulging in drinking, gambling, partying, and petty crime, Prince Hal’s example suggests that perhaps you’re doing that with a view to your dignity and majesty being shown to better merit when you change your ways.

Or, if you’re observing the prince hoping that he’ll undergo a transformation before he comes into power, or that he’ll exchange his current cronies for some others that you think would be more sympathetic to your politics – well, Prince Hal again provides a literary precedent for that pattern of reform, rejection, and renewal. Exploring this history for the ShaRC project, we’ve found that some princes have actively courted associations with Prince Hal, while others have had it applied to them by satirists and pamphleteers.

Kirsten: Frederick’s grandson, George IV, was the earliest target for this kind of satire – in 1783, a print by John Boyne showed George, Prince of Wales, as Prince Hal to the Falstaff of the Whig politician Charles James Fox. We’ve included Boyne’s print in our online exhibition, ‘Making History’, which launches on 15 July. Fox’s great girth, and known propensity for wine and women made him an obvious Falstaff but, in the case of George IV, the wished-for transformation into Henry V was never to be: later satires show him turning, instead, into Prince Hal’s sack-swilling, womanising companion.

The theme of the Shakespearean Prince of Wales was clearly useful for satirists seeking to critique the royal family, but, at the same time, it’s also politically useful for the royal family themselves. If the Prince of Wales is a focus for opposition to the crown, that opposition has a safe, reassuringly royalist outlet and, if he identifies specifically with the historic figure who went on to become the Hero of Agincourt, its effect can be positively celebratory. This is probably one reason for the continued dominance of the Prince Hal theme through history: so far, we’ve found it applied to Edward VII, Edward VIII and the current incumbent, Prince Charles – a self-proclaimed devotee of Shakespeare’s plays, who was probably thinking of the Henriad when he named his second son Henry, known as Harry.

Under George’s niece, Victoria, the monarchy increasingly came to define itself as it does today – as a royal ‘family’, partly a response to the threats posed to monarchies by the revolutions of 1848. Here, too, we’ve noticed them turning to Shakespeare, both as a subject for patriotic royal patronage, and, via Shakespeare’s most pointedly ‘English’ play, The Merry Wives of Windsor, a way to root themselves in the national landscape.

Sally: Victoria’s relationship with The Merry Wives of Windsor was complicated. The play’s main plot focuses on Falstaff’s attempts to lure two married women into love affairs, and though his attempts all end in humiliation, the queen was appalled by the subject matter. She wrote to her daughter in 1859 ‘I have never had courage to go to see it—having always been told how very coarse it was.’ However, Merry Wives‘s setting in the environs of the royal family’s oldest residence made it difficult to ignore completely.

Falstaff’s final humiliation in the play takes place at a landmark called ‘Herne’s Oak’: a tree haunted by a long-dead hunter who hanged himself from its branches, according to local folklore which Shakespeare either borrowed or invented. By the nineteenth century, several different trees in Windsor Park had been identified as ‘the real Herne’s Oak’ or (on one map published in 1742) ‘Sir John Falstaff’s tree.’

One candidate was felled on the orders of George III in 1797. In 1863, another tree associated with the legend blew down in a storm, and one William Perry, styling himself ‘wood-carver to the queen,’ set about carving relic objects from its wood, several of which are in the Royal Collection today. Perry published a treatise defending the authenticity of the ’63 tree, using maps, charts, and tree-ring analysis to argue that this particular oak was known to Shakespeare.

As with the story of Prince Hal, Shakespearean connections can be useful to the royal family: the location of a tree mentioned by Shakespeare on royal land helped to re-entrench the relationship between the national poet and the monarchy, and to situate that relationship in a firmly English context.