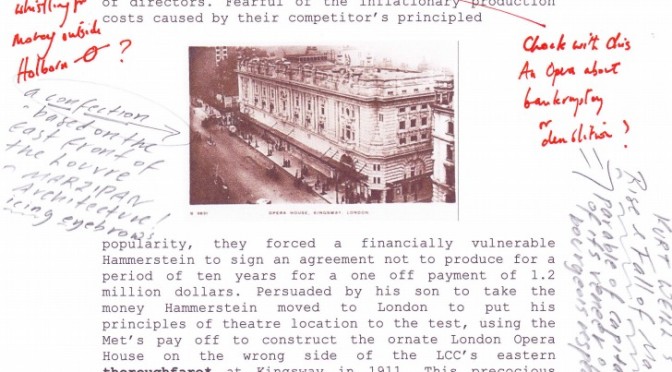 22 Kingsway: This is Your Life tells the remarkable story of the site for which the English and Comparative Literature Department is the current sitting tenant. Conceived by the theatre makers Forster & Heighes in collaboration with the Performance Foundation and 20th Century Magazine, and generously supported by the KCL Principal’s Fund, our intention was to trace the hidden history of a building that to the outside eye would appear to have little to say. As we discovered, nothing could be further from the truth. Some buildings are silent, some speak, this one, despite its mute modernism, sings.

Characteristically Forster & Heighes deploy a neat rhetorical device for their project. Early in their archival research (each of their projects is a meticulous archaeological reconstruction of the performance histories of location), they discovered that the popular, if somewhat cheesy, version of Life Writing, This is Your Life, was presented from the Thames Television Studios that occupied the Royalty Theatre at 22 Kingsway (the forerunner of The Peacock) through the 1970s and 1980s. The show was presented by the ubiquitous Eamonn Andrews who would often intercept his ‘unknowing’ celebrity guests on Kingsway, before bringing them inside to be confronted by all kinds of people from their past they often did not look that happy to see again. Forster & Heighes offer up their project in the form of a mock ‘shooting script’ (nestling in the characteristic red covers of the series) for the ‘life’ of the building itself, and in so doing take us on a journey as fantastical as it is unlikely for such a sober example of modernist excellence.

You can access the illustrated and annotated shooting script here:

Opening with a courteous nod to Virginia Woolf’s equating of memory to a ‘capricious seamstress’, Forster & Heighes weave a tapestry that takes us from Oscar Hammerstein’s London Opera House built on the site in 1911, via the Stoll Picture Theatre of 1916 (combining Ciné Variety and Ice Shows through to the 1950’s), and eventually to Lewis, Soloman, Kaye and Partner’s office development that arose from the ashes of bankrupted theatrical aspirations in 1960. Unusually for the time the LCC planning department insisted on the retention of a theatre on the site, as part of the new complex, and hence the way the Peacock, previously the Royalty, is embedded within this beautiful paean to modular functionalism with its daring curtain walls.

For theatre aficionados it could not have had a more auspicious opening with a 60 week run of Peter Brook’s celebrated Broadway production of Friedrich Durenmatt’s demanding work, The Visit. But this success could not delay the sweeping taste for epic cinema and the installation of Cinerama facilities booming out soundtracks to films such as Ice Station Zebra for all those in the open plan offices above to hear. As King’s now encourages shy academics out into the open with increasing economies of open-plan sharing, so 22 Kingsway offered the Open Plan masterpiece of its age. It is a lovely irony that most of it has been subdivided into a warren of human scale compartments.

By the late 1970s Cinerama had given way to Paul Raymond’s ‘Royalty Follies’ and his ‘International Nude’ Show, which featured the ever popular Dolphinarium, a 10,000 gallon tank cranked up from beneath the stage, in which the dolphins Pixie and Penny, were, as Forster & Heighes delicately put it in the shooting script: “trained to remove the bikinis of participating dancers”. If you can manage the disturbing issues ranging from ‘animal consent’ to ‘precarious labour’ that such an image suggests, you will find pictorial evidence in the attached project record. We stand on the smooth shoulders of giant dolphins in performance.

But these considerations don’t have to be just flipper’nt. Thanks to Forster & Heighes we know that there has been a continuous history of theatre at 22 Kingsway since at least 1660, when Gibbons’ Real Tennis Court on the site was used for theatrical production by Killigrew, and became the venue for the first ‘professional’ performance by a woman on the London stage.

22 Kingsway: This is Your Life, as with all Forster & Heighes / Performance Foundation projects is not intended as a piece of archival research that stops short of performance. It has been designed to offer a stimulus and invitation to others to act on its findings, and to put into practice events that might pay heed to what went before, and what might be. If you are interested in Forster & Heighes other work you will find evidence of their thirty-year adventure here:

The Performance Foundation has worked with Forster & Heighes on numerous occasions over the last three decades, most recently at King’s in collaboration with the Cultural Institute who generously supported the sensational sprawling installation at Somerset House, Plant Science (2013) in which vast parts of the abandoned Plant Sciences facilities at Herne Hill were cut up and brought to the East Wing, where they were displayed in the form of an unruly auction sale.

If you are interested in this kind of work and would like to get involved there are two ways to do this. On the one hand you can sign up to the Performance Research Group, convened by Dr Lara Shalson, Dr Kélina Gotman and Dr Harriet Curtis in the English Department at King’s, which holds regular events related to performance study and supports our postgraduate cohort.

Second you can contact me at alan.read@kcl.ac.uk if you would like to participate in Performance Foundation events such as the forthcoming Artangel collaboration with Maria Fusco and Joanna Walsh:

The Performance Foundation was established at King’s in 2010 to support external, publicly facing projects with artists, architects and designers. Regular participants in the Foundation include the Stirling Award winner Steve Tompkins of the architectural practice Haworth Tompkins (who provided the initial drawings for the Anatomy Theatre & Museum development), the designer and publisher Simon Josebury, founder of the design company Secondary Modern, (who conceived and designed the Performance Foundation publications identity) as well as the site theatre makers Forster & Heighes.

Projects to date initiated by the Performance Foundation include the conception, build and delivery of the Anatomy Theatre & Museum (2010) on the Strand in collaboration with Professor Sheila Anderson and the Centre for e Research at King’s; the conception and development of the Inigo Rooms (2012) in the East Wing of Somerset House in collaboration with Katharine Rabson Stark, Katherine Bond and King’s Business; and the conception of King’s Cultural Partners (the forerunner of King’s Cultural Institute) that built upon long-running initiatives in culture and the arts such as Creative King’s:

Perhaps appropriately, the Performance Foundation has now turned its attention to the possibilities inherent to King’s recent acquisition of the lease on Bush House, previously the long-term home of the BBC World Service. Working with faculty from a range of disciplines and long term collaborating artists, a proposal is in development to initiate a Performance/Broadcast and Media initiative that would recognize the astonishing broadcast legacy of that site that sits imperiously watching the traffic on Kingsway.

Those two figures atop Bush House, signaling its inauguration as an iconic site for Anglo-American business relations, look towards the Eastern side of Kingsway on which 22 Kingsway stands. If they know their theatre history they know the challenge for us. ‘Our side’ has long been considered ‘the wrong side of the tracks’ by theatregoers. Widened, electrified and tram-lined in the early twentieth century, the peculiarly article-less Kingsway (like an inversion of the more popular article-less Strand) has been considered a bridge too far as long as there was no bridge to cross the treacherously channeled highway. The presence of the Arts and Humanities Faculty and the Performance Foundation, resolutely standing with those at this Midtown margin, will continue to contribute to the many-storied history of the 22 Kingsway site.

The apparatus to winch that Dolphinarium back up to that stage is still there. Does anyone have a 10,000 gallon tank, and some dexterous dolphins to spare?