This article has been divided into two parts. Part 1 is about the Production process and Part 2 discusses Student engagement, feedback, and reflections.

In the summer of 2018, I challenged myself to produce video “prelude” lectures to create a partially flipped classroom for an Organic Chemistry module. This first blog entry describes the creation process. 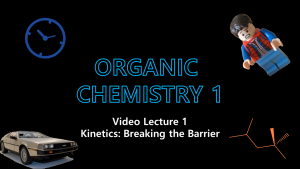 One of the major hurdles in teaching organic Chemistry (and there are a lot of these) is the amount of content that it seems necessary to cover in class to be able to do justice to each key topic within a lecture course. After starting teaching on a first-year undergraduate module in 2017, I quickly felt that, despite my best intentions, my lectures were turning into the dense info-dumps that I had often dozed off in during my own undergraduate years. I knew I wanted to include more opportunities for class discussion and active learning, but fully flipping the lectures felt impractical.

I found inspiration from several YouTube channels (notably, ‘Crash Course’), and decided to create a set of 7 videos, each covering the introductory essentials of a topic – effectively a revision of A-Level material. This would allow me to quickly move onto more complex concepts in lectures, and provide time for other class activities – creating a “partially flipped” classroom.

Scripts were written, a suitable camera was found (my phone) and a reasonable amount of money was spent on a decent lavalier microphone. I taught myself advanced PowerPoint animation techniques (with a little help again from YouTube), and found suitable free audio and video editing software (Audacity and Shotcut). Filming was completed on two separate days, my flat rearranged into a makeshift studio – complete with a rickety construct of books and Lego supporting the camera! Despite the finished videos being 4-10 minutes in length, recording took a lot longer as I frequently forgot my lines – perhaps next time I’ll invest in an autocue…

Each video probably took about 3 days of work in total to complete – scripting and filming could be done in a couple of hours, but animating and editing took much longer (and put a lot of strain on my computer at points). Additionally, I also created an animated title sequence, partly as a means to hone my skills, and also to create a unifying “brand” across the series of lectures. The finished videos were uploaded to YouTube to make use of its auto-captioning feature to provide subtitles (correct about 95% of the time) and then linked to the module’s KEATS page.

Each video was set to release immediately after the first 7 lectures of a 10 lecture course – students were informed of the videos during the first lecture, so the videos were acting as preludes to lectures 2-8 (the reasons for not providing any for 9 and 10 will be explained in part 2). The day of the premier of the first video arrived – now I had to see if the students would make use of it…

Dan Cornwell joined King’s College in 2016 as a Teaching Fellow in the Department of Chemistry and has recently accepted the position of Lecturer in Chemistry Education. As well as delivering lectures, workshops and labs across undergraduate year groups, they work on designing, developing and implementing innovative methods to support the teaching of Chemistry. Their pedagogic research interests include technology-enhanced learning, Team-Based Learning methodologies, and the types of language used to explain complex scientific ideas.