The moment I walked through the doors signposted ‘King’s College’ with the hallmark red labels, I realised this job was unlike many first graduate jobs. My first three thoughts were research, specialist and “I’m just a grad”.

I joined King’s College London as an IT Graduate Analyst, having graduated a few months prior in English Language and Linguistics. Whilst I was excited and enthusiastic to start, I was worried about heading into an unknown path, specifically the world of technology. IT as an area of expertise was foreign to me. I knew how to navigate and roam MS applications and could just about tiptoe around a few creative studios, but apart from that, I was an amateur. Much to luck and coincidence, I was placed in most probably my best fit in King’s IT.

At first, everyone kept referring to the department as CTEL. Whilst I now know that CTEL is the abbreviated form of the Centre for Technology Enhanced Learning, I have to admit at first, I thought it stood for a robot that could speak, well that or….a fancy microwave. Soon after joining, I realised that all the technical jargon and specialist language would soon become second nature. I now know that SSO (Single Sign-On) and ITIL (Information Technology Infrastructure Library) aren’t short forms for dating apps, I learnt the hard way…I jest. 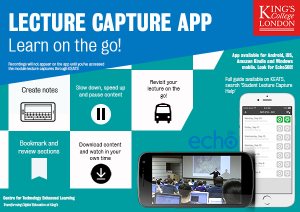 On a more serious note, since joining King’s, I have been witness to some of the most exciting and influential projects in King’s TEL (Technology Enhanced Learning) community, from assessing the importance of technological platforms, such as Lecture Capture, to promoting exciting initiatives like Lynda.com and GDPR. Each initiative has been valuable in terms of experience and has made what could be a conventional nine-to-five office job something more exciting… cliché to say it but no two days are the same.

On arrival at KCL, I created user guides and CPD evaluations. I later worked on Policy reviews and with time I co-project managed a Lynda.com IT project. In a more conventional day, I carried out horizon scans, business benefit realizations and had a grasp on CTEL communications. My line manager gave me the flexibility to test drive a few areas, which meant whilst I hit one or two small bumps in the road, I could always find the nearest roundabout and turn left. Some of my favourite projects have been the review and change to university-wide policies on Learning Technologies, as well as visiting the LinkedIn office to plan an effective strategy to engage students with Lynda.com 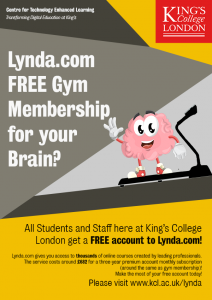 CTEL as a team are a genuine pleasure to work with. The team are happy, forward-thinking and innovative. With every job comes obstacles, time pressures and stresses, but I can honestly say that CTEL do everything they possibly can to mitigate and manage that. CTEL allowed me to gain confidence in an unfamiliar area and allowed me to share my thoughts regardless of the seniority of a meeting. For example, I created and updated CTEL branded templates and administration tasks for greater effectiveness (online storing of documents related to TEL). I also had the chance to create new branding for CTEL. Please see some of my designs in this post.

Ultimately, I never felt like I was an outsider on loan, which is easy to feel if you’re a Graduate on placement. As my graduate experience drew to a close, I knew that the skills I learnt within CTEL would be transferable to other sectors and give me the confidence to build on in my career. 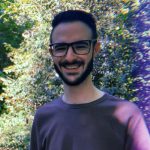 Tom Madden worked in CTEL from 2017-18 and was an IT Graduate Analyst having joined Kings College London through the IT Graduate scheme. Tom has since left Kings to work at the Department for Business, Energy and Industrial Strategy in Policy. Tom’s work in CTEL provided him with core transferable skills for his new role, and Tom is still in touch with CTEL.