Understanding the Uncertainty of Learning to Learn

that describes the data generating distribution is assumed to be random and is endowed with a prior distribution. This distribution is conventionally chosen based on prior knowledge about the problem. In contrast,  Bayesian meta-learning (see Fig. 1 below) aims to automatically infer this prior distribution by observing data from several related tasks. The statistical relationship among the tasks is accounted for via a global latent hyperparameter

for each observed task

is drawn according to a shared prior distribution

. Following the Bayesian formalism, the hyperparameter is assumed to be random and distributed according to a hyper-prior distribution 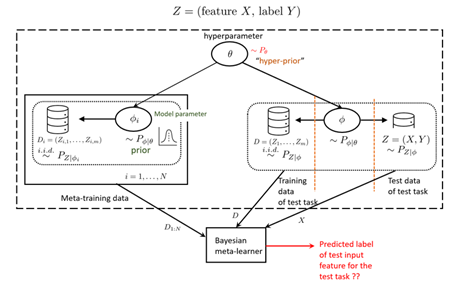 The data from the observed related tasks, collectively called meta-training data, is used to reduce the expected loss incurred on a test task. The test task is modelled as generated by an independent model parameter

thus maps the meta-training data, the test task training data and test input feature to an action space.  The Bayesian meta-risk can be defined as the minimum expected loss incurred over all meta-learning decision rules, i.e.,

. The epistemic uncertainty, or minimum excess risk, corresponds to the difference between the Bayesian meta-risk and Genie-aided meta-risk as

Our main result shows that under the log-loss, the minimum excess meta-risk can be exactly characterized using the conditional mutual information

which scales in the order of 1/Nm+1/m, and vanishes as both the number of observed tasks and per-task data samples go to infinity. The behavior of the bounds is illustrated for the problem of meta-learning the Bayesian neural network prior for regression tasks in the figure below. 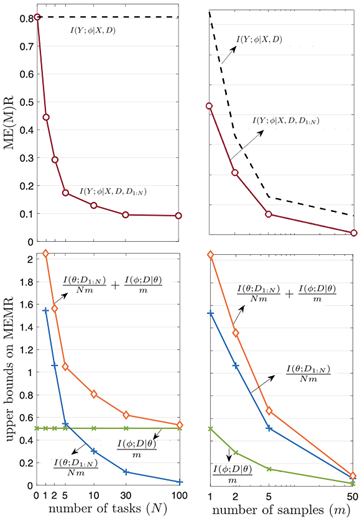 Figure 2: Performance of MEMR and derived upper bounds as a function of number of tasks and per-task data samples