Learning How to Adapt Power Control in Dynamic Communication Networks

An essential property of any wireless channel is the fact that it is a shared medium, much like the air through which sound propagates is shared among the participants of a conversation. As a result, communication engineers must deal with the resulting interference,  which may substantially limit the reliability and the achievable rates in a wireless communication system. A proven remedy is to adapt the transmission power to current channel conditions, which was successfully addressed by the data-driven methodology introduced in [1] in which the power control policy is parametrized by a random edge graph neural network (REGNN).

In our recent work to be presented at SPAWC 2021, we focus on the higher-level problem of facilitating adaptation of the power control policy. We consider the case where the topology of the network varies across periods of operation of the system, with each period being in turn characterized by time-varying channel conditions. In order to facilitate fast adaptation of the power control policy — in terms of data and iteration requirements — we integrate meta-learning with REGNN training.

Our meta-learning solution leverages channel state information (CSI) data from a number of previous periods to optimize an adaptation procedure that facilitates fast adaptation on a new topology to be encountered in a future period. We specifically adopt first-order meta-learning methods, namely first-order model agnostic meta-learning (FOMAML) [2] and REPTILE [3] that parametrize the adaptation procedure via its initialization within each period. While GNNs are known to be robust to changes in the topology, the proposed integration of meta-learning and REGNNs is shown to offer significant improvements in terms of sample and iteration efficiency. 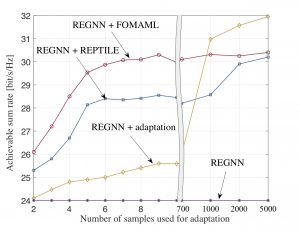 Fig 1. Sum rate as a function of the number of samples used for adaptation, for a network with dynamic size.

The achievable sum rate with respect to the number of CSI samples used for adaptation is illustrated in Fig. 1 for a network in which the number of transmitters and receivers changes in each period. Meta-learning, via both FOMAML and REPTILE, is seen to adapt quickly to the new topology, outperforming conventional REGNN, even when allowing for fine-tuning of the later. This significant improvement can be attributed to the variability of the topologies observed across periods in the considered scenario, which makes the joint training approach in [1] ineffective. That said, when the number of samples for adaptation is sufficiently large, conventional REGNN training as in [1] outperforms meta-learning, as the initialization obtained by meta-learning induces a more substantial bias than joint training due to the mismatch in the conditions assumed for the updates on meta-training and meta-testing tasks (i.e., the different number of samples used for meta-training and adaptation).

Please see the paper for more results and a more extensive analysis, which is available here