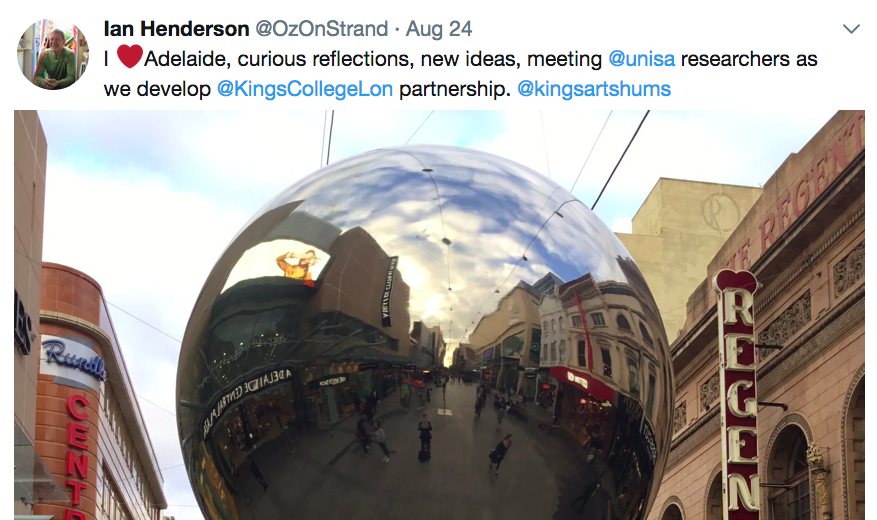 by Ian Henderson, Director of the Menzies Centre for Australian Studies and Senior Lecturer in Australian and Victorian literature. This post was first published on The MCAS Director’s Blog.

Ordinarily September arrives like a high-speed gear change with the clutch still half engaged. The teeth-shearing rasp ratchets across British academe as we shift from August’s intensely imagined worlds of more-or-less cloistered research and writing into the induction circus of Welcome Week.

Most of us brush off last year’s complaints about teaching for threadbare repartee in student-filled hallways, while concealing the thrill of it all. Teaching is the lifeblood of most academics, after all; in reality it’s harder to stop us doing it, shut us up.

This year is a little different for me (re the gear-change, not the shutting up). The nature of my role in directing the Menzies Centre for Australian Studies means I was chipping away at College business throughout summer. That kept me in the habit of coming into King’s rather than going to the library or writing at home.

But more to the point, teaching itself came to occupy the place of a research-project ‘question’ during this summer’s ‘research period’: intensely scrutinised, carried about with me in myriad different places (half way around the world, as it turned out), looked at from many sides, held up as a lens and a foil for whatever print matter fell before my eyes.

There were specific reasons for this. For a start, one of my ‘other’ administrative roles is to co-ordinate the English Department’s Graduate Teaching Assistant training scheme. This puts me in direct contact with our mid-point postgraduate research (PhD) students, and what a stellar bunch of people they turned out to be. I should have known that, of course, but there was something about meeting well over thirty of them one-to-one in June that drove home their talent, their commitment to academic research, and their sheer drive.

It also got me thinking further on a key hobby-horse of mine: encouraging discussion about what the future of ‘intellectual work’ might look like. I’ve seen some remarkable changes in the higher education sector during my own 15-year teaching and research career, but nothing compares, I think, with the changes about to come.

It dawned on me, then, that these brilliant GTAs comprised a cohort of young intellectuals who would be finding their first jobs—I hope—as academics just as the real change kicks in…

What was I going to do about that? (Not that the future isn’t already here: it’s highly evident in controversies surrounding the ‘zero hours’ contract effect of the academic ‘early career’ experience.)

Now, as a Department we have encouraged GTAs to treat the application and allocation process of their entry into the programme as a practice-run for applying for postdoctoral academic jobs. For my part I realised how not-yet-in-the-habit many postgraduates are with regard to spelling out their own philosophies of higher education teaching (for themselves, that is, rather than for a graduate ‘academic practice’ course). They are excellent in practice; so a nudge towards setting down on paper what their experience and ideas have taught them about teaching per se was all that was needed.

But I needed my own nudge. What was my own philosophy of teaching? That became the ‘research question’ of my summer.

Education itself is not my research specialism, but I listened and learned about teaching as I next embarked upon a whistle-stop tour of Australia, feeding the Menzies Centre’s fledgling strategic partnerships with the Universities of South Australia, Tasmania, Melbourne and Western Australia; and developing future plans with new contacts at Curtin, Flinders, Canberra, AIATSIS and James Cook University (this trip I really charted the coast from Perth to Cairns!).

As the main topic of my visits was the Centre’s soon-to-be-unveiled British-Australian Indigenous Knowledge Exchange (the title is provisional), I met many Australian scholars working in Indigenous Studies, and many Aboriginal and Torres Strait Islander leaders. If that’s not a good way to learn about teaching, I don’t know what is.

I heard accounts of amazing research but also witnessed the extraordinary commitment of these fellow academics to making a difference for their students and the wider community: in extraordinarily challenging circumstances. (Some seemed to be held responsible, also, for enhancing the ‘cultural aptitude’ of non-Indigenous Australians like myself… but that’s for another blog.)

When I returned to Britain, the teaching focus continued. King’s released its own new Education Strategy 2017-2022, the product of much labour among my colleagues this last year, and a calibrated response to the College’s inspiring Strategic Vision 2029 document. More grist to the mill.

But in fact these marvellous institutional visions found great resonance with the lessons I learned from my trip around Aus: lessons which rather had their roots in country and deep awareness of shared human kinship, and the intellectual wealth of thinking with land.

The ground is our source; its dry fount flows through our feet…

Engaging with these Indigenous thinkers and leaders this trip and over many years has taught me the significance of prioritising community even when in the cloister; and certainly in the classroom. Or to put it in HE speak, I have learned that my own teaching philosophy is to nurture in students research and teaching methodologies which integrate personal development, multi-disciplinary and transnational intellectual work, and engagement with professional services, communities and business people to effect change.

The people I met have also given me a question to ask of all students as they confront why and how they should engage with formal education: ‘What qualities, interests and methods should I develop and what social, intellectual and business connections should I foster to make which communities stronger?’

This is all about recognising the ubiquity and worth of human intellectual work: that everyone has an intellectual life, and it is a valuable quality of every human, lost with her or him, unless brought into communication. (It’s easier than you think to forget this.) The Euro-American system of higher education is just one tool for developing that intellectual work’s effectiveness in oneself, with one’s peers and for communities. It is an immensely powerful tool, I think. But it is a tool which should only be exercised within wider fields of human value: not as arbiter of that worth.

All this is a long prelude to explaining why I found myself so overwhelmed by Professor Irabinna Rigney’s inaugural David Unaipon Lecture, delivered at King’s College London on 18 September 2017. (The Annual David Unaipon Lecture series is the ‘shop window’ to a deepening set of collaborations between the University of South Australia and King’s, brokered by the Menzies Centre.)

I always expected to be engaged by Professor Rigney’s lecture, which—on the face of it—was on ways forward for decolonising the education of high-school age Aboriginal Australians. But I didn’t expect to be knocked out by it.

The lecture, which I urge you to watch, was deeply researched, persuasively argued, and powerfully delivered. It made a knock-out case for change in policies regarding the education of young Australians. And it made some excellent other points along the way (about not sending our youngest teachers into the hardest classrooms, for example).

Moreover it clarified for me the biggest mistake we continue to make as educators, and as custodians of great Western educational institutions. Every time we market ourselves as exclusive centres for talent or rank ourselves obsessively, puff out our chests about student numbers or take pride in obstruction-strewn processes of acceptance and enrolment, we seem to say to everyone else in our communities, whether we mean to or not, ‘your ideas do not count, your fields of imagination are less, the country of your intellect is null’. We are paying the price politically for this mistake every day lately; for others it costs their lives.

Looking from the outside, what I have learned about traditional Indigenous Australian pedagogy does quite the opposite. And for me, Professor Rigney was offering ways to take those lessons and turn some bad habits of Traditional British Knowledge inside out…

So I was overwhelmed because Professor Rigney’s lecture so absolutely confirmed in my head—and in my flesh and bones—a notion which, I think, has driven my own contributions to the Menzies Centre’s recent development. That custodians of Indigenous Australian Knowledge, their intellectual lives flourishing through that epistemology’s structures of learning (its systems rooted in country but ready for the world), their habits honed (for better, often for worse) through forced translation into other planetary epistemologies, are first among the many innovators we need—youthful and wisdomful—not only to make Traditional Euro-colonial Knowledge, my own intellectual heritage, fit-for-purpose in a mixed-up planet, but to create something wholly new that will embrace and transform 21st-century life.

The ‘Knowledge Exchange’ that the Menzies Centre will soon host is underpinned by recognition of the enormity of intellectual encounter between the peoples of Briton and of the First Nations of Australia: and, more importantly, the far-reaching potential for innovation of bringing together custodians of vastly different, but now ‘entwined’, intellectual traditions.

That recognition does not erase the importance of resistance and protest. And it must incorporate the attention, empowerment and funding critically needed to build the capacity of young Aboriginal and Torres Strait Islander Australians, thinkers of our shared future.

But the broad applicability and innovation potential of Professor Rigney’s deeply researched ideas with regard to education, were what his inaugural David Unaipon lecture really brought home to me. It was quite a lesson.

On the trail of Doris Lessing: Lara Feigel explores the velds of Zimbabwe