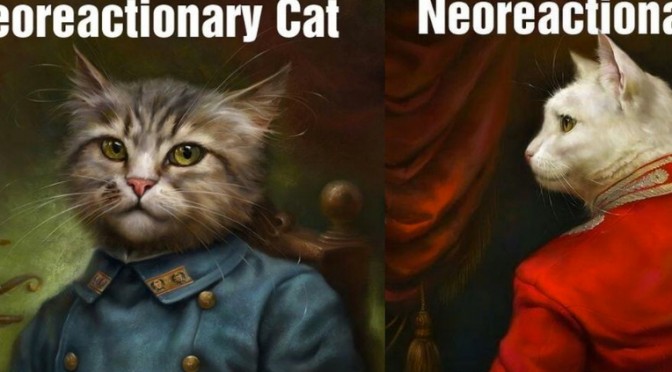 Following on from a discussion of conspiracy, paranoia and the conservative disavowal of expertise, I discussed neoreactionary movements, and questioned whether or not conspiracy thinking was at work in the formation of a central conceit of neoreactionary ideologies, that of ‘The Cathedral’.

Neoreaction (NRx) is a category used to refer conveniently to a diverse group of thinkers. It should not be taken as a consistent or even coherent political philosophy but as a generous taxonomy used to describe overlapping political commitments that stem from divergent corners of the political quadrant. Simplified, NRx thinking emerges from some overlapping principles whose juncture contains elements of technology capitalism, ethno-nationalism and self-determination reached through limited government intervention.

The gestation of the NRx movement is not my primary objective in writing this blog post. However, it is important to  gesture cursorily to the multiplicities of viewpoints enshrined in NRx thinking, which produces some very fascinating synthesis of far-right, even evangelical thinking and extreme libertarian principles. These mostly converge on principles that defend the rights to self-determination bolstered by visions of small-scale authoritarianism , mainly the state functioning as paterfamilias or as a neo-monarchist superstructure.

Another phenomenon frequently cited alongside NRx thinkers is the Dark Enlightenment, which is basically a superset of ideas that encompasses the plateaus where NRx thinking is cultivated. Proponents of the Dark Enlightenment style themselves as concerned with unveiling the truth about society by exposing and critiquing the flaws that they perceive in the basic operations and values that form the foundation of democratic systems.

According to NRx, ‘The Cathedral’ is the name for a self-organising ideological alliance of the elite: this alliance is composed of academics, the media, government, and, in some models, businesses. It is an engine of abstract, universalist consensus building and distribution.

Someone who supports the Cathedral theory would probably suppose that this very blog post is, technically, written by one corrupted by the Cathedral’s ideological imperatives and hosted on one of its platforms for consensus-building.

The name comes from NRx founder Mencius Moldbug’s use of the phrase ex cathedra (‘from authority’) to describe the way that the university-media-state nexus propagates liberalism from positions of power. To anyone uninitiated into the discourses of NRx, the conceit of the Cathedral might read like a cyberlibertarian conspiracy inflected with the ludicrous delusions of an Alex Jones-style paranoid hyperbolisation.

Despite it being referred to on some occasions as a conspiracy (see the entry ‘The Cathedral’ in The NRx Compendium of Concepts and Terms), it is both incorrect and counterproductive to ask: is the Cathedral a conspiracy? This is the wrong question for several reasons. It forecloses the opportunity for a thorough understanding of what role the Cathedral plays in structuring NRx thinking prohibits left-leaning thinkers from understanding how to challenge, revise, or correct the assumptions undergirding the Cathedral as a conceit.

What do we mean when we ask: ‘Is the Cathedral a conspiracy?’

Is the Cathedral a result of conspiratorial thinking by NRx?

Is the Cathedral a social technology misclassified as a conspiracy by NRx? That is to say, does the Cathedral function as a form of social segmentation, organisation and classification? Does it generate symbols, creates code and parlay these structuring metaphors into an understanding of social systems?

Is the Cathedral a real power structure operated by liberal conspirators?

If we want to grasp the discursive and schematic role that the Cathedral plays in constructing a political worldview, we must reframe the questions and our own orientations to the subject matter. We should ask questions that consider the ways that the Cathedral functions to account for mass action and collective behaviour that positions itself as frictious to – or out of the control of – conservatives. Our inquiry can be rerouted and mobilised more successfully if we ask:

What work does ‘The Cathedral’ as a discursive structure do? What if we reconsidered it as a social technology, operative through the lenses of NRx, and not as a conspiracy – a condemnation from the outside, made to denigrate and stifle closer inspection of a topic?

These questions are more generative ones to ask about the way the Cathedral is introduced in NRx and why referring to it as a conspiracy is problematic. Like the Patriarchy, the Cathedral is viewed as a social or cultural programme, and functions as an extended metaphor that codifies social and cultural operations and values under one convenient heading.

It’s a more accurate conclusion to say that the Cathedral functions, on the NRx view, as a kind of social technology.

Understanding why and how the Cathedral works as a structuring metaphor makes it less likely that NRx detractors commit the short-sighted error of dismissing it ‘conspiracy theorising’. It opens up the possibility for genuine political oppositions and positive challenges to be introduced against this framework.

King’s College London’s ‘Speculations’ seminar series engages in current research in speculative and science fiction, but with a particular interest in intersections across a spectrum of disciplines that engage in varieties of speculative thought. Five ‘episodes’ were held in the spring term of 2017, and ‘Speculations’ will resume at the start of the 2017/18 academic year.

The ‘Speculations’ series is organised by Sinéad Murphy (@S1nead_Murphy), PhD candidate in the Department of Comparative Literature, and is  supported by the Faculty of Arts and Humanities at King’s.

People and Poems at Political Demos