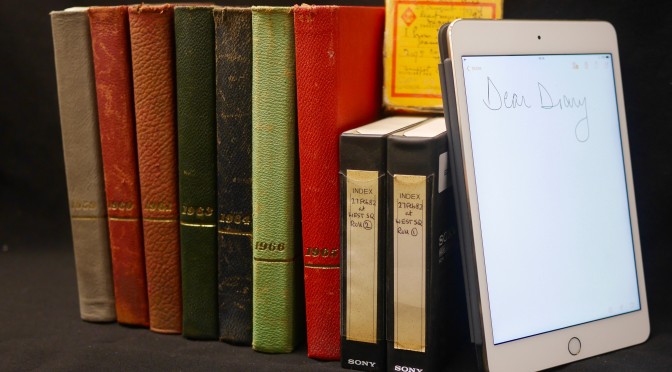 is a phrase you still hear. The expression gives no clue as to whether the speaker uses a paper diary or an app, and not needing to make the distinction shows how old and new forms of diary co-exist happily. The paper appointment diary is still an everyday object – I have a Filofax I was given in the 1990s when they were fashionable and it’s still easy to buy an annual refill. Meanwhile an increasing number of apps make the diary mobile-friendly, multi-media, synchable – and, if you want to keep it private, encryptable.

Do you have a paper diary? Do you use a diary app? Do you contribute to an online diary platform? Do you do none of the above but are curious about diaries? Then put in your diary 26 May – 7 July, the dates for Dear Diary, a forthcoming exhibition at the Inigo Rooms, East Wing, Somerset House on diaries old and new. It’s a collaboration between the Centre for Life-Writing Research, which I co-direct, and the Great Diary Project, directed by Dr Polly North.

The GDP is a thriving archive housed in the beautiful and friendly Bishopsgate Institute near Liverpool Street station. Its founder, Irving Finkel, argues that ‘Diaries are among our most precious items of heritage. People in all walks of life have confided and often still confide their thoughts and experiences to the written page, and the result is a unique record of what happens to an individual over months, or even years, as seen through their eyes. No other kind of document offers such a wealth of information about daily life and the ups and downs of human existence’.  The GDP came to talk at the Centre for Life-Writing Research in 2014 and then suggested we partner for an exhibition.

I could write about the months spent planning Dear Diary as a production diary, something like playwright Simon Stephens: A Working Diary (Bloomsbury, 2016) a calendar-based account of his spectacular successes in 2014. The blurb sells it as ‘an exceptionally honest account…unprecedented access to [his] mind’, hyping up a common association between diaries and revelation. Or I could make a video diary like Planet Earth Diaries (2006), segments of narrative which explain behind-the-scenes efforts, or how footage of elusive camels involved a two-month trek across Mongolia… Ah yes, similar to putting on an exhibition. I could share Instagrammed developments every day, or I could share lists and goals from an ornately-decorated bullet journal. Or I could creep into a small space like Big Brother’s Diary Room and complain to camera.

Each of these diary genres spins off from a genealogy which stretches back to Babylonian almanacs, clay tablets from around 1400 BC recording the movement of the sun, moon and stars. So one of the puzzles of the exhibition has been how to put varieties of diary together, and how do we define these varieties in the first place? What connects them conceptually?

Diaries can make everyday lives seem extraordinary. At times I left the GDP thinking never again will I assume anything about a human being.

The puzzles got bigger over the exhibition planning process, but so did the team of helpers and thinkers. The Ego Media research group, based in the English Department, has expertise in blogs, vlogs and life-logging; funded by the European Research Council (pre-Brexit), its main research question is ‘What’s happened to life writing in the digital age?’. Diaries are a fine test case. I think there are at least three answers, and they help to structure the exhibition’s layout in what proved to be a difficult space with many practical challenges.

Diaries can make everyday lives seem extraordinary. At times I left the GDP thinking never again will I assume anything about a human being. People are full of surprises. It’s difficult to replicate that effect in an exhibition when there’s so much to be said and shown from diaries’ long and global history. But we’ll try.

We will show film interviews with living diarists and footage of daily life made by refugees in camps in the Middle East. A forthcoming blog post here will talk more about the political and ethical questions raised in exhibiting these diaries alongside domestic journals.

Famous diarists include Virginia Woolf, Anne Frank and Anais Nin, also Frances Burney, Anne Lister, Dorothy Wordsworth, Beatrice Webb… we give them a namecheck, but this exhibition is not about famous or even literary diarists. It’s about the genre. Instead, we’ll show women reading their teenage diaries – brave! – and engage with mummy vloggers. We’ll explore the profiles of users of fitness apps, descendants of the Puritans who turned to diaries to review their faults and aspire to virtues. Critics have noted how women gravitate to journals as a place where self can be fluid and prose experimental, and the exhibition features many such examples.

There’ll also be a day of  talks about diaries by writers, artists and critics: Diaryfest, on the 30 May 2017 in the Council Room, Strand Campus. Register for free and see the full programme on the King’s website. Speakers will include Alexander Masters who took possession of 148 diary volumes found in a skip and turned them into a biography in A Life Discarded (2016), an ingenious book which foregrounds diary reading and refreshes the idea of reader as detective. For most of the book neither he nor we know who the subject is. Anonymous isn’t confined to diaries of course, but it has particular resonance given the diary’s association with secrecy and illicitness – an idea given a room in our exhibition, where Disney princesses, call girls, bankers and spies come together.

The blog, of course, is a diary descendant, now with a literary history of its own – hence a happy medium in which to alert you to Dear Diary. In 2013, Technorati’s Digital Influence survey declared that blogs were the fifth most trustworthy source overall for information on the Internet. And believe me, Dear Diary will be thought-provoking and fun. We look forward to seeing you there.

Stay up to date with Dear Diary #DearDiaryExpo