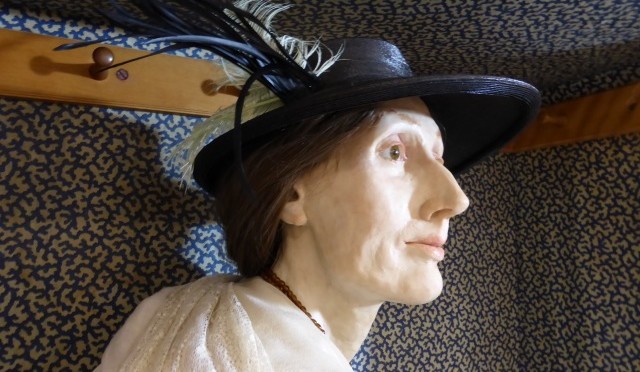 One of KCL’s most famous alumni has returned to the college, taking up ‘a room of her own’ in the lobby of the building named in her honour.

‘Wax Virginia’, a work by sculptor Eleanor Crook, was unveiled – or ‘unleashed’ – on Wednesday evening, at an exciting event organised by Professor Clare Brant, co-director of the Centre for Life-Writing Research at King’s, and well-attended by staff, students, and other Woolfish enthusiasts. The sculpture is the result of over 120 hours of work and careful research – Crook studied photographs of Woolf in order to trace the changes in her face over time and to select the particular moment – and emotion – which she wanted her sculpture of Woolf to occupy.

Introducing the event, Clare Brant explained that ‘Wax Virginia’ (a name chosen because of the symmetry of the initials WV with Woolf’s initials VW) was conceived in a conversation with Dr. Ruth Richardson, a Senior Research Fellow in the Centre for Life-Writing Research, who commented that Woolf, despite attending courses in Greek, Latin, German and History at King’s over the course of five years, from 1897 to 1902, had never actually been awarded a degree. Professor Brant suggested that a degree ceremony should be held – complete with a wax model of Woolf. The proposed ceremony has now been abandoned, but Professor Brant and Dr. Richardson commissioned Crook, a sculptor known for her anatomical and pathological waxworks, to make the model.

Watch the video of Eleanor Crook working on ‘Wax Virginia’.

Professor Brant’s introduction was followed by a speech by Anna Snaith, Woolf scholar and Professor of English Literature at King’s, who described Woolf’s enthusiasm for the waxworks at Westminster Abbey, about which she wrote an essay, ‘Waxworks at the Abbey’, and her interest in what Professor Snaith described as the ‘uncanny effects of extreme realism’ produced through the medium of wax. Professor Snaith also explored Woolf’s interest in Kingsway (a relatively new thoroughfare at the time) and pointed out that Wax Virginia’s placement in the lobby is highly appropriate given her ‘outward-looking’ attitude and her passion for London as a place of ‘serendipity’, ‘trespass’ and ‘protest’.

A video was then played which threw light upon Eleanor Crook’s fascinating creative process. Particularly notable were the shots of Crook making subtle manipulations to Wax Virginia’s eyelids – a process which can take the same amount of time as the whole rest of the face – and using the surface of a lemon to give Virginia’s head a ‘natural’ texture. A lot of thought clearly went into Virginia’s clothing, which was modelled upon a photograph of Woolf with her friend Lytton Strachey.

The only surviving recording of Woolf’s voice accompanied the video, ending with Woolf’s comment about the power of words ‘to mean different things to different people’. In the Q&A which followed the video, Crook explained her attempts to retain the ambiguity of meaning which was, to Woolf, so important; instead of limited her sculpture to one single expression Woolf is caught between two, the right side of her face expressing a more ‘introspective’ mood, the left side more ‘social’ and engaged.

When the cupboard doors were opened and Wax Virginia was finally revealed – and toasted by all of those present – it became clear just how true Crook had been to the spirit of Woolf’s writings. When, in her feminist, pacifist polemic Three Guineas, Woolf imagines her ideal ‘women’s college’, she describes:

“… An experimental college, an adventurous college. Let it be built on lines of its own. It must be built not of carved stone and stained glass, but of some cheap, easily combustible material which does not hoard dust and perpetrate traditions.”

Wax Virginia embodies the qualities of impermanence and contingency so valued by Woolf. She resists the cold authority of traditional sculptures of ‘great’ figures. Instead, she leans forward, engaged, alert, slightly ironic, looking as though she has just sat down for a moment in the lobby to read her book. You can imagine her feeling, as her character Rhoda does in The Waves, that ‘Month by month things are losing their hardness; even my body now lets the light through; my spine is soft like wax near the flame of the candle. I dream; I dream.’