Sensing, Communicating, and Classifying with Spikes

Or how to remotely classify data with 80% accuracy and zero latency at Signal-to-Noise Ratios (SNRs) as low as – 8 dB. 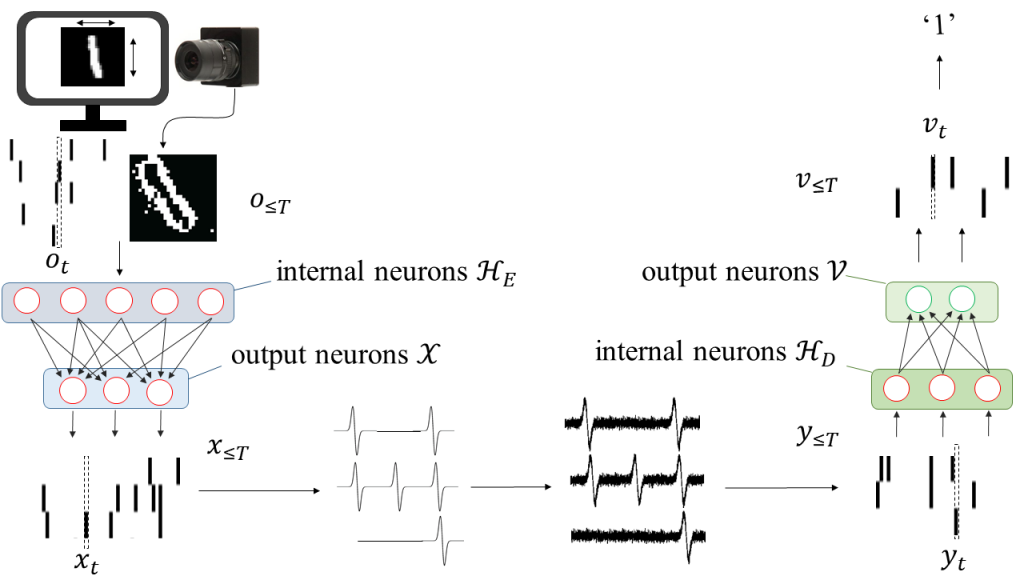 Problem
The development of Internet of Things (IoT) systems, with applications ranging from personal healthcare and wearable devices to drone-based monitoring, is driving research efforts on edge-based machine learning. In such systems, data may be collected by battery-powered sensors and processed at a remote device, which may itself be energy-constrained. Standard hardware implementations pose major energy and latency limitations for such applications.
In our new paper, recently accepted at Asilomar 2020, we investigate a novel solution based on neuromorphic sensors, processors, and transmitter/receivers. In neuromorphic sensors, spikes (i.e., binary signals) mark the occurrence of a relevant event, e.g., a significant change in a pixel for a neuromorphic camera. Extremely low energy is consumed when the monitored scene is idle. In neuromorphic processors, known as Spiking Neural Networks (SNNs), spiking signals are processed via dynamic neural models for the detection of spatio-temporal patterns. SNNs have recently emerged as a biologically plausible alternative to ANNs, with significant benefits in terms of energy efficiency and latency. Finally, for communications, pulses, or spikes, can encode information for radio signalling via low-power Impulse Radio (IR). Commercial products are available for all these blocks, including DVS cameras, Intel’s Loihi SNN chip, and transceivers implementing the IEEE 802.15.4z IR standard.

System model
As seen in Fig. 1, the proposed system consists of the integration of neuromorphic sensing and processing with IR transmission, and it carries out Joint Source-Channel Coding (JSCC), as it performs source and channel coding in a single step. The signal sensed by the neuromorphic sensor, e.g., a DVS camera, is encoded as a vector of binary spiking signals, and processed by an encoding SNN that performs source and channel coding. The SNN defines a probabilistic mapping that is defined by its parameter vector. The output of the encoding SNN is modulated using parallel IR transmissions, with each spike encoded by an IR waveform such as a Gaussian monopulse. The channel is modeled as a frequency-flat Gaussian channel. Finally, the received signals are classified via a decoding SNN whose output can be interpreted as a class index using standard methods for SNN-based classification. For example, rate decoding predicts a class by selecting the neurons in an output layer with the largest number of spikes.
The proposed system in Fig. 1, termed NeuroJSCC, is trained by maximizing the log-likelihood that the decoding SNN outputs desired spiking signals in response to a given input. Details on the training procedure, and the resulting algorithm, can be found in the preprint. 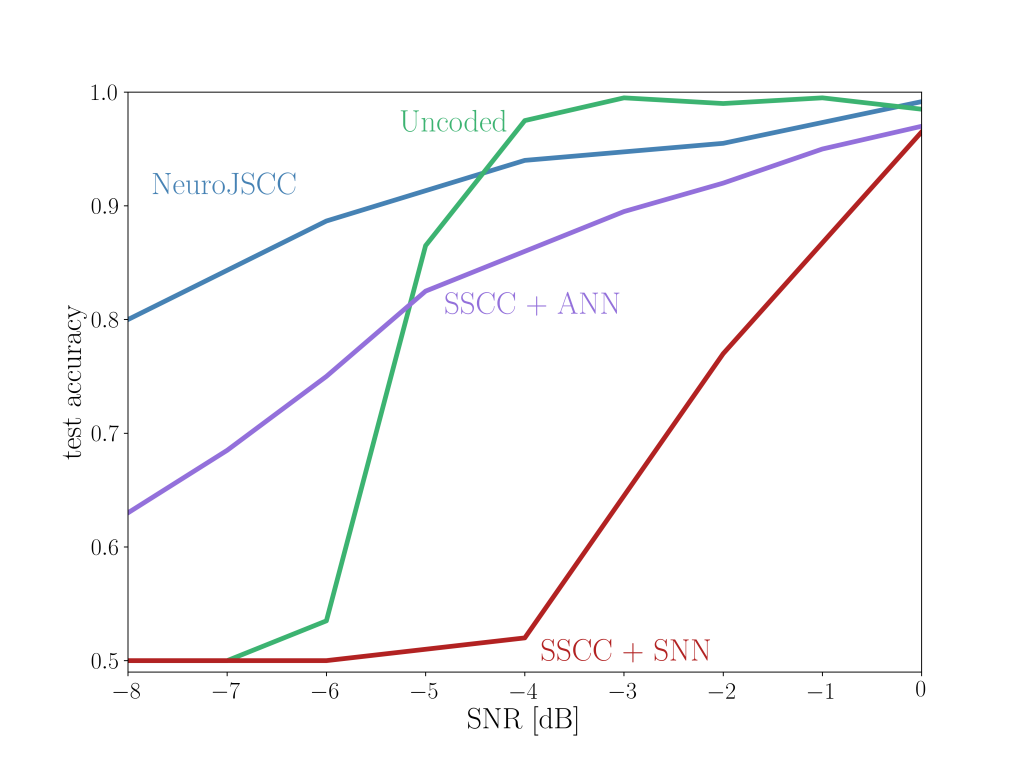 To illustrate the advantage of the system, we focus on an example consisting of the remote detection of handwritten digits recorded by a neuromorphic camera.
We compare NeuroJSCC to two benchmark schemes:
1) Uncoded transmission: The observation is directly transmitted through the Gaussian channel using On-Off Shift Keying (OOK), and classified using an SNN.
2) Separate Source-Channel Coding (SSCC): The encoder applies state-of-the-art quantization based on the Vector Quantization Variational Autoencoder (VQ-VAE) scheme, followed by LDPC encoding. The spiking signal is encoded as frames, and the scheme is applied separately to each one of them. At the decoder side, frames are decoded using the Belief Propagation algorithm, decompressed using VQ-VAE decoding, and then classified. We consider two different classifiers, namely traditional ANN and SNN.
In Fig. 3, we evaluate the test accuracies at convergence obtained for different levels of SNR and the different schemes. The accuracy of Uncoded transmission drops sharply at sufficiently low SNR levels. In contrast, NeuroJSCC maintains a test accuracy of 80%, even at an SNR level as low as −8 dB. Separate SCC with an SNN as classifier suffers the most from the degradation of the SNR. Using an ANN proves more robust to low SNR levels, since an ANN can benefit from the non binary outputs of the VQ-VAE decoder without further loss of information due to binary quantization.
We refer to the main text for further experiments and analysis.
Code will be released shortly on our Github page.