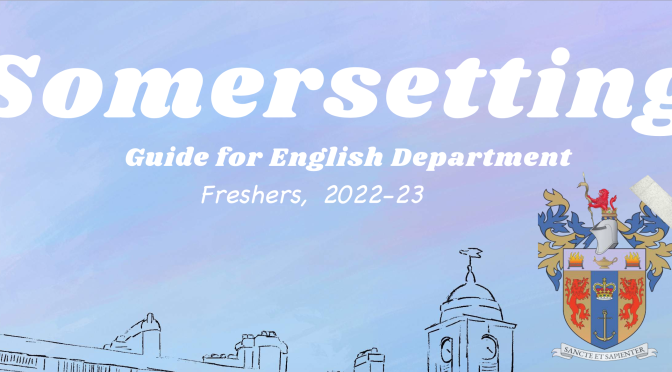 Each year, departing third-year students in the English department put together a guide for arriving first years. This year’s Somersetting magazine offers a student perspective on studying English at King’s and addresses some issues of concern for new students.

I present English Student Representatives, Giulia Cellerini and Madiha Qureshi, in conversation with Dr Josh Davies, Senior Lecturer in Medieval Literature. The student reps share advice that they would give to first-year students starting their time in King’s English Department.

First of all, congratulations to both of you for graduating and thank you for all the work you put in as student reps! Let’s begin broadly thinking about your time studying English at King’s. How would you describe it?

I would describe it as absolutely fantastic! I think studying English is really different to any other university subject because the range of what you can study is just so much broader and you can just really either choose to go really specific into one kind of strand or keep it extremely broad and study anything from contemporary political pieces to Shakespeare or even medieval literature. I think that’s really amazing. Also, just being in the centre of a huge global city and how the course integrates that into the things that we study is really fantastic. We have some really great tutors.

I would definitely say the same as Giulia. I would say it’s not, like, easy to own. It is a bit of a roller coaster, but that’s all part of the uni degree. I really enjoyed being at King’s and meeting the people that I got to work with and be taught by. It is just a lovely environment. And I was going to say the same about being at the heart of London: being in Holborn, being on the Strand, was just really nice in terms of having that dynamic culture around you whilst you’re learning.

I think one piece of advice I would give to the incoming first year is to say think proactively about creating communities for yourself. One big difference for students to think about is that at university you’re not with the same bunch of people all the time so you’ve got to kind of seek out and create new connections. Would you two agree with that?

I was going to say it’s what you put into it, that’s what you’ll get out of it. If you don’t really seek out the communities that you want to be surrounded by, it can be hard and it can be isolating at times, but there are resources and at the end of the day everyone is in the same position, everyone wants to reach out to everyone and I think that’s always what I kept in mind whenever I felt nervous about approaching someone.

I would just add as well that there’s so many societies built for that purpose. Especially if you’re an international student, you don’t know a lot of people in London. I think meeting people from your own communities back home in London in this new context really helps to keep the home sickness away or to kind of like share that with other people as well. Could you talk now a little bit about your time as student reps? I always recommend students to become student reps because it does exactly what we’ve been talking about. It creates community. Has that been your experience of it?

First, I always say this, when I became a student rep, one thing I’m very grateful is I actually met Giulia and we are good friends now because of it. And I was thinking, like, would we have crossed us had we not have become student reps? So as much as it was also about me getting involved in King’s and getting involved in the university environment, it also meant a lot to me because I made a good friend out of it and it was an easy way to make a good friend.

Yeah, I was going to say the same as Madiha, but honestly, I think it’s very much like one of those things where I became a student rep because I was like, I just want to help, I want to see what happens. Being a student rep really helps you feel like part of a community within King’s. I was talking before about how when you leave the campus, suddenly you’re in the middle of the city and it’s like hard to get your bearings and you don’t know who’s in your course, who isn’t. I think being a student rep, you start organizing things within the department, so you end up meeting other students in your department from different years. You can ask them for advice or where to get like books or get better contact with your tutors, which I think is something first you tend to be really afraid of. I think in being a student rep, you also just kind of see your tutors are also human.

I think it is so important for first year just to spend time meeting with different tutors, to just to get rid of that fear and to normalize just knocking on someone’s office door and chatting with them. So what advice would you give to the incoming first year?

This is going to sound really bad to say this to a lecturer, but honestly, don’t stress about the reading. You don’t have to do all of it. I think that’s one of the things with the first year you get you see all these books and you’re like, ‘I have to read all of these in one week? This is insane.’ But you don’t have to read all of it. Honestly, what I did most of my first year is I read like half or just as much as I liked, to get an idea of the style of writing the author has. And then I would just summarize, like, I’d look up summaries just so I could contribute in the seminar. Because first year doesn’t count a lot for a reason. Tutors know it’s going to be difficult. They know it’s going to be a time of adjustment. That’s why they don’t put that much pressure on it.

I feel like I should add a footnote to Giulia’s advice!!! Of course we should try and do all the reading, but we are all human and sometimes it won’t be possible to read every single word of every single text. It is always still worth going to the seminars and lectures. If you can’t do absolutely all the reading, fine. But going to the seminars is so important because you get to listen to other people’s ideas, you get used to being part of that kind of conversation, part of that community. And even if you haven’t read the whole text, even if you’ve only read three chapters of Bleak House or whatever, you might have an idea through participating in that conversation that would be intensely valuable to you. What would you say, Madiha?

I agree with all the above. And also, don’t leave it to the last minute. It’s such an easy thing to say, ‘I’m not going to leave it to the last minute. I’m going to get on top of it,’ and then all of a sudden it’s all coming at you. I speak from experience in my first year: that was not the way to do it! And it’s easy for me to say but it’s hard to implement it. So I’d say get into study groups, get into even study sessions, get into a schedule to try and make yourself feel like you have something to do every day and you have a goal to achieve. And then you’ll be very grateful by the end of the term that you didn’t leave it all to one place. But also enjoy yourself. It’s your university. This is the time you won’t get back and the time a lot of people say is like the best time of your life. So enjoy it as much as you can.

The full magazine can be found here: Somersetting Magazine. Check for more coverage on the department blog!