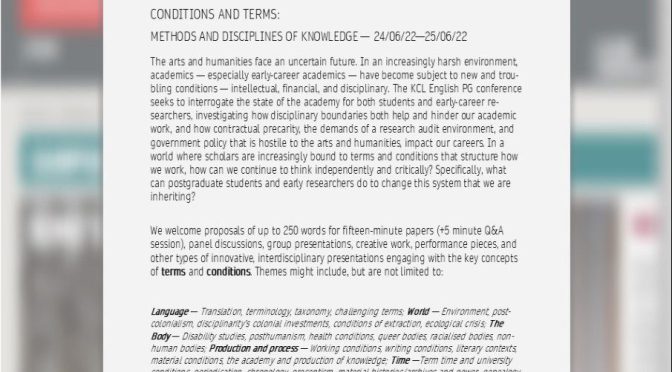 In June 2022, the English Department’s PGR community circulated the brilliant news about an annual conference. The event was a hybrid presentation as it took place in-person and online. It welcomed research presentations from postgraduate students at UK and international universities. This year’s papers addressed the theme of “Terms and Conditions: Methods and Disciplines of Knowledge.”

The call for papers:

The KCL English PG conference seeks to interrogate the state of the academy for both students and early-career researchers, investigating how disciplinary boundaries both help and hinder our academic work, and how contractual precarity, the demands of a research audit environment, and government policy that is hostile the arts and humanities, impact our careers. In a world where scholars are increasingly bound to terms and conditions that structure how we work, how can we continue to think independently and critically? Specifically, what can postgraduate students and early researchers do to change this system that we are inheriting?

The programme of presentations honoured the postgraduate research projects that are centred on a diversity of research areas that had a wide range from the ancient historical period to modernity. The conference was spread over the days of Friday 24th June in the Safra Lecture Theatre at Strand and Saturday 25th June via the online platform. It was a beautiful summer day for this conference, and a nice gathering to enjoy an excellent programme that offered the wonderful opportunity to learn about fellow postgraduate students’ research projects.

On the first day, the conference began with a wonderful discussion of Felix Antelme’s research on handedness and its role in turn-of-the-century understandings of identity. Alex Giesen presented on his study of aesthetics, classification, and the taxonomy of scientific terms in the modern work of the performance artist, Leigh Bowery. Then, Sammy Moriarty delivered a fascinating paper centred on his analysis of Herman Melville’s “The Apple Tree Table.” In the third panel, “Performing Disciplines,” Emma Bentley presented her research in classical myth and historical legends with a particular focus on the Greek hero, King Agamemnon. Emma joined us from the University of Oxford where she will graduate with a MPhil in Classics. Attendees listened to Beth Potter’s performance piece, “The Elephant in the Ring: Empire and the Conditions of Circus Studies.” Beth presented brilliant research that explores the period between the “traditional” and “contemporary” circus. In this way, circus studies tends to overlook twentieth-century circus’ homage to the infrastructure and culture of empire. Beth explains that circus studies in the present day does not account for circus’ connexions with empire, and these interconnected links are the “unacknowledged elephant in the ring.” Then, Olufemi Abati presented his great work on “Blind Music Production and Accessibility: The Role of Academic Communities in Ensuring Equitable Playing Field in the Music Industry.” He discussed digital technology that prompted a revolution of modern music and addressed the role of the music industry in academia.

The research presentations for the “Novel Forms, Novel Selfhoods” panel were given by George Kowalik and I. George introduced “A Crisis of Novel Aesthetics,” which addresses the dialectic of singularity and pluralism in Zadie Smith’s novel, White Teeth. George proposes that the novel’s framework of narrative maps and characters emphasise twenty-first century post-postmodernism. Deleuze’s and Guattari’s concept of the “rhizome” applies to the novel and illustrates the aesthetic terms of modern and postmodern structure, and the experimentalism places the rhizomatic structure and shape into effect. My own paper centred on Edith Wharton’s novels, The Custom of the Country and The Reef, and analysed the transnational identity in the character portraits of the heroines through a transatlantic shift that bridges the nations of France and America at the fin-de-siècle.

The last panel of the day held a compelling paper from Karen Downs-Barton on place and nomadism in contemporary Romani poetics. Karen’s presentation reflected on the historical disciplines of knowledge through the emergence of a contemporary Gypsy, Romani, and Traveller (GRT) poetic expression. This diasporic heritage and multilingualism are politicised to form counter-narratives to outsider, or non-GRT, literary tropes. She concluded with an autoethnographic examination of the three expressions of Anglo-Romani poetic identity through place, language, and communication. Daniele Zurbrügg presented a great paper on spaces of capital and neoliberal urbanism. Daniele’s research provided insight to the developing neighbourhood of Nine Elms in London that represents a materialisation of the finance-dominated economy. It presents the tension in how the financialised attempts at placemaking materialise. Daniele states that economic value emerges in its form of a neighbourhood in the abstract, and symbolically has markers of liveable space whilst making these assets less tradable.

On the second day, the conference shifted from in-person to virtual mode. There were research presentations in two panels and a keynote lecture from Professor Grace Lavery (UC Berkley) who read an inspiring passage from her memoir, Please Miss.

In the sixth panel, Avneet Sharma, a postgraduate student at McGill University, read his paper, “Sex and Citizenship in Nineteen Eighty-Four (1984).” In George Orwell’s novel, the political concept of sex upholds the Party’s values but makes the characters, Winston and Julia, risk the rejection of citizenship to Oceania. The paper examines the role of celibacy and misogyny in the dystopia and within the Party’s ideology under Big Brother’s reign. Afterwards, Amanda Caterina Leong, a PhD candidate at the University of California Merced, spoke about patriarchal kingship and sovereignty in Gulbadan Begum’s Humayun-Nama, a Persian autobiography. Begum, a Mughal princess in the sixteenth century, offers a new understanding of how elite Mughal women used advice literature to broker imperial power with male co-sovereigns. To build upon Michel Foucault’s theory of counter-memory, her paper argued that Begum creates a “new mirror for princesses” autobiography that redefines the genre by using memory to instruct readers on how women embodied the term “javanmardi,” a Persianate masculine chivalry central to the Mughal definition of virtuous kingship, which led to the integrated matriarchy’s contribution to the formation of the Mughal Empire.

Lastly, the keynote speaker, Grace Lavery, offered a reading from her memoir. It was a nice, captivating passage from her book, and there was a Q&A discussion that followed.

In all, the conference was a brilliant success, and overflowing with the exciting research happening at King’s, within the academic community across the UK, and other universities worldwide. The conference offered a kind, supportive environment that facilitated beneficial conversations amongst researchers and hosted an invaluable platform to present work. The diverse, engaging set of presentations through this educational platform shared promising research ideas.

As a student representative on the King’s English Postgraduate Research Committee, I designed the conference programme that listed the abstracts of research presentations and introduced the keynote speaker this year. I had the honour of being the chair of the “Intimate Knowledges” panel, which entailed introducing the presenters and moderating the discussion and questions. Beth Potter, Sammy Moriarty, Felix Antelme, Alex Giesen, and all the PGR representatives in the committee did their best to make the conference a success.

With the upcoming 2022-23 academic year, I wish all faculty and students a great, meaningful term of research, workshops, and dissertation writing ahead. I hope the annual conference will be hosted by King’s Department of English in many years to come.

Congratulations to all the students and researchers who presented their research at the conference! Thanks to the King’s English Postgraduate Research Committee for their beautiful work with organising the conference this year.

Samantha Seto is a PhD candidate in English Literature. Her research interest is centred on the heroines’ character portraits, transnational identity, and French aristocracy in twentieth century American and French novels. This past summer, Samantha was honoured to be an academic tutor for a course in a summer programme at the University of Cambridge.