What about changing the mode of the feedback we provide on student coursework? Here we explore the idea of providing audiovisual feedback in a simple screencast, giving students a real-time insight into your thoughts as you mark.

Our focus  is the way in which undergraduate essays receive feedback. Conventionally, this takes the form of written comments in the text of an essay and some further general written feedback.

Within King’s, a number of policies and conventions are employed in the way feedback is delivered to students. Feedback must be returned to students within four weeks. Some departments specify a minimum number of words. Others require that feedback is organised by a number of headings, relating to the marking scheme.

Feedback of this kind can be time consuming for academics to produce – existing studies suggest that it is amongst the most costly teaching activities in terms of staff time. Moreover, assessment and feedback is consistently the least satisfactory element of the student experience at King’s according to student evaluations – in some departments there is nearly a 20 point difference between overall satisfaction with teaching and student views on assessment and feedback in recent NSS scores. Addressing student concerns over feedback can have a considerable effect on the level of student satisfaction with undergraduate teaching.

Emerging technologies mean that feedback can be provided to students in other ways, rather than anonymous written comments. In particular, the potential for screencapture commentary to enhance student experience of feedback has begun to be explored in recent literature. Screencapture commentary allows written feedback to be replaced by an audio commentary of the marker’s voice which plays alongside a real time video file of their computer screen. This allows markers to verbally provide feedback while illustrating their comments with the essay in question (for example, by highlighting relevant sections of text while commenting on it).

Evidence of increased student satisfaction lies in two areas. First, this approach offers an increased volume of feedback in comparison to written comments (according to some studies, seven or eight times more than written feedback). Second, it offers a more personalised set of comments which are clearly tailored to the essay.

The example below illustrates the potential for screencapture feedback on a high-scoring Level 6 undergraduate essay. The module in question focuses on democratic theory, and the essay included here is worth 85% of the overall module grade. The assessment aims to test the student’s understanding of the theoretical debates explored during the module, alongside a range of skills in essaycraft that students will have developed throughout their degree. 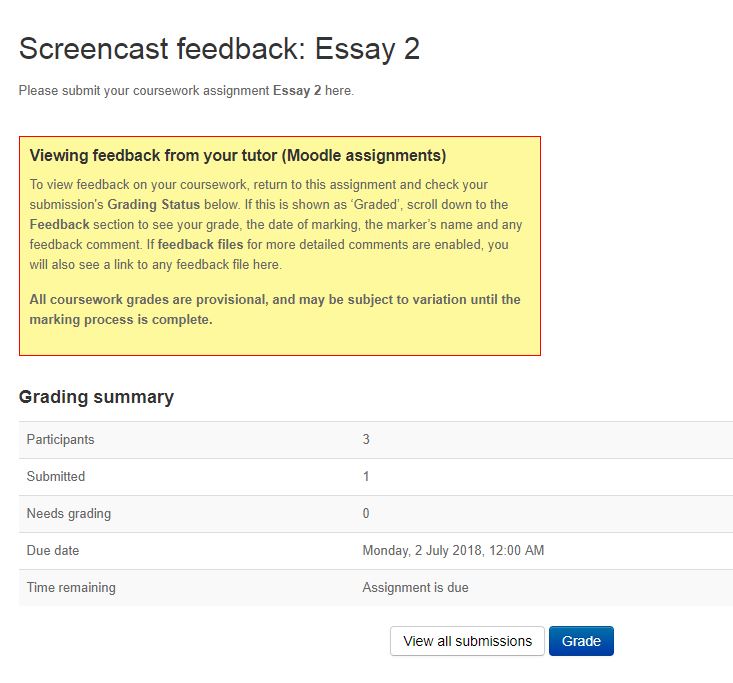 The example includes the original written comments on the essay, as well as the screencapture file. This file was easy to produce using Screencast-O-Matic software, and resulted in significantly more words than the original feedback. A comparison also reveals distinctions in tone from the original feedback, and it is more precise. In particular, it is possible to illustrate the main points of feedback simultaneously with examples. Once I was familiar with software, marking like this took approximately the same amount of time as conventional written feedback.

Screencapture will not suit everyone, and the advantages outlined here will not be applicable to every module. However, the example here illustrates some of the advantages and utility of the software, and its potential for providing feedback in an engaging and accessible manner.

Welcome to Assessment for Learning at King’s.

King’s Academy designed this resource for lecturers, module leaders, programme leaders, support staff, and anyone involved with teaching. Use this resource as part of your assessment and feedback planning to stimulate thinking about different approaches to assessment.

Please contact us if you would like more help in designing or implementing any of the examples shown in this resource:

Provide Feedback on this Site