The results of the BEST3 trial have just been published and the findings have exceeded even our most optimistic expectations. This trial showed that the Cytosponge, a small sponge with a string in a pill, can find 10 times as many people with Barrett’s oesophagus than would normally be found. Barrett’s oesophagus is a condition of the oesophagus (food pipe) that can lead to oesophageal cancer.

Why do we want to diagnose Barrett’s oesophagus and why do we need this new test?

In the UK more than 9000 people are diagnosed with oesophageal cancer every year. As this cancer is mostly diagnosed late, only about 12% of patients (12 patients out of 100) survive for more than 10 years. There are different types of oesophageal cancer and one of these types is called oesophageal adenocarcinoma or OAC. OAC is linked to persistent acid reflux or heartburn. Even though heartburn affects up to 20% of adults, only a very small fraction go on to develop cancer. It is estimated that 3-6% of individuals with reflux have a precursor condition called Barrett’s oesophagus and individuals with Barrett’s are more likely to develop cancer. Barrett’s and oesophageal cancer can only be diagnosed with endoscopy, which is an invasive and expensive procedure. It is therefore not suitable to be used for cancer screening, even if it would only be used for patients with heartburn. However, once someone has been diagnosed with Barrett’s we know that these individuals have a greater chance of getting OAC than the rest of the population, but it is still only 3-13% (3 to 13 out of 100 people with Barrett’s). They will receive regular endoscopies to diagnose any cancers early. Furthermore, new therapies are now available where pre-cancerous Barrett’s can be removed by endoscopy preventing cancer from occurring. Diagnosing patients with Barrett’s will therefore help us to prevent or diagnose Oesophageal adenocarcinoma earlier when it is still treatable.

Professor Rebecca Fitzgerald and colleagues at the University of Cambridge have developed a test that can be used to diagnose Barrett’s oesophagus in general practices (GPs). It uses a little sponge on a string called the Cytosponge to collect cells from the oesophagus. The patient swallows the pill holding the end of the string. After 5 to 10 min, it expands into a small sponge inside the stomach. The Cytosponge is then quickly pulled back up the throat by a nurse collecting cells. These cells are then later tested in the laboratory for a biomarker for Barrett’s called Trefoil Factor 3 (TFF3).

How did the BEST3 trial work and who could take part? 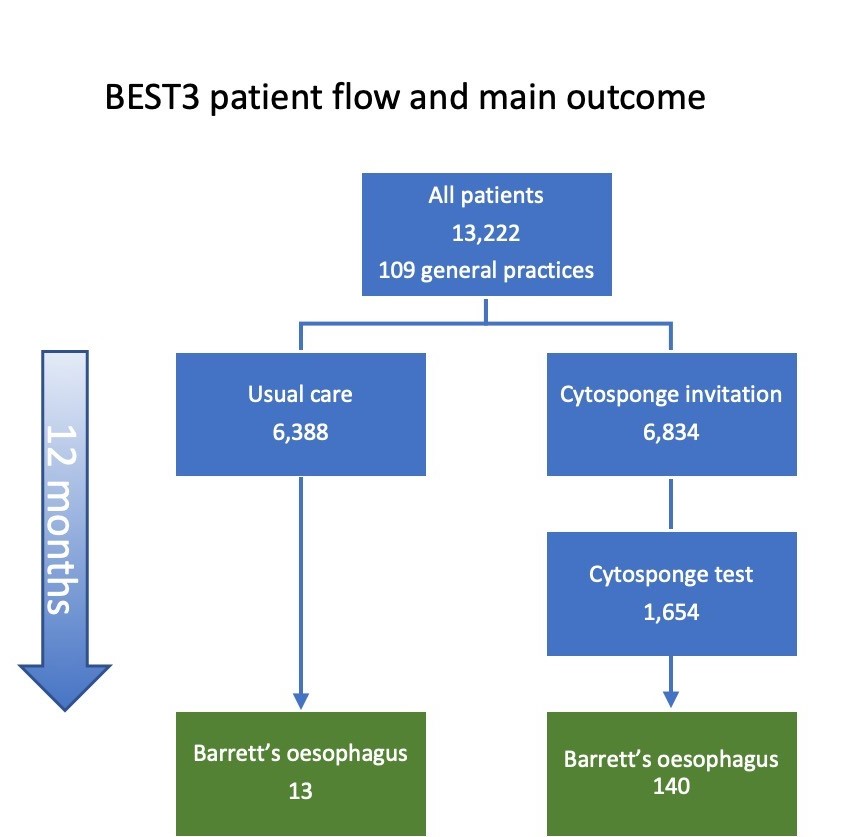 The Cytosponge tests were carried out by a nurse at the patient’s GP to make the test as convenient as possible. Any patient with a positive Cytosponge-TFF3 test was referred for an endoscopy to confirm if they had Barrett’s. At the end of the trial, we compared the number of new Barrett’s diagnoses between the two groups over the course of a year.

What were the findings of the BEST3 trial?

109 GPs in England took part. Overall 13,222 patients participated in BEST3 and over half (6,834 patients) were invited to have a Cytosponge-TFF3 test. About one quarter (24%) of those invited, 1654 patients, had the test. Patients completed an acceptability score (range 1 to 10 is completely acceptable,) after the test. Patients gave the cytosponge and average score of 9, but 1 in 23 patients experienced a sore throat after the test.

Is there more work needed before the Cytosponge test will be available at all GPs?

A new research programme is now underway to help us further characterise the patients who will benefit the most from having the Cytosponge test, which type of clinics will be most cost effective and practical to offer the test, how to streamline the laboratory diagnosis among other details needed to establish the best way to implement the cytosponge as a standard test used at GPs.

A ‘sponge on a string’ test to detect oesophageal cancer earlier